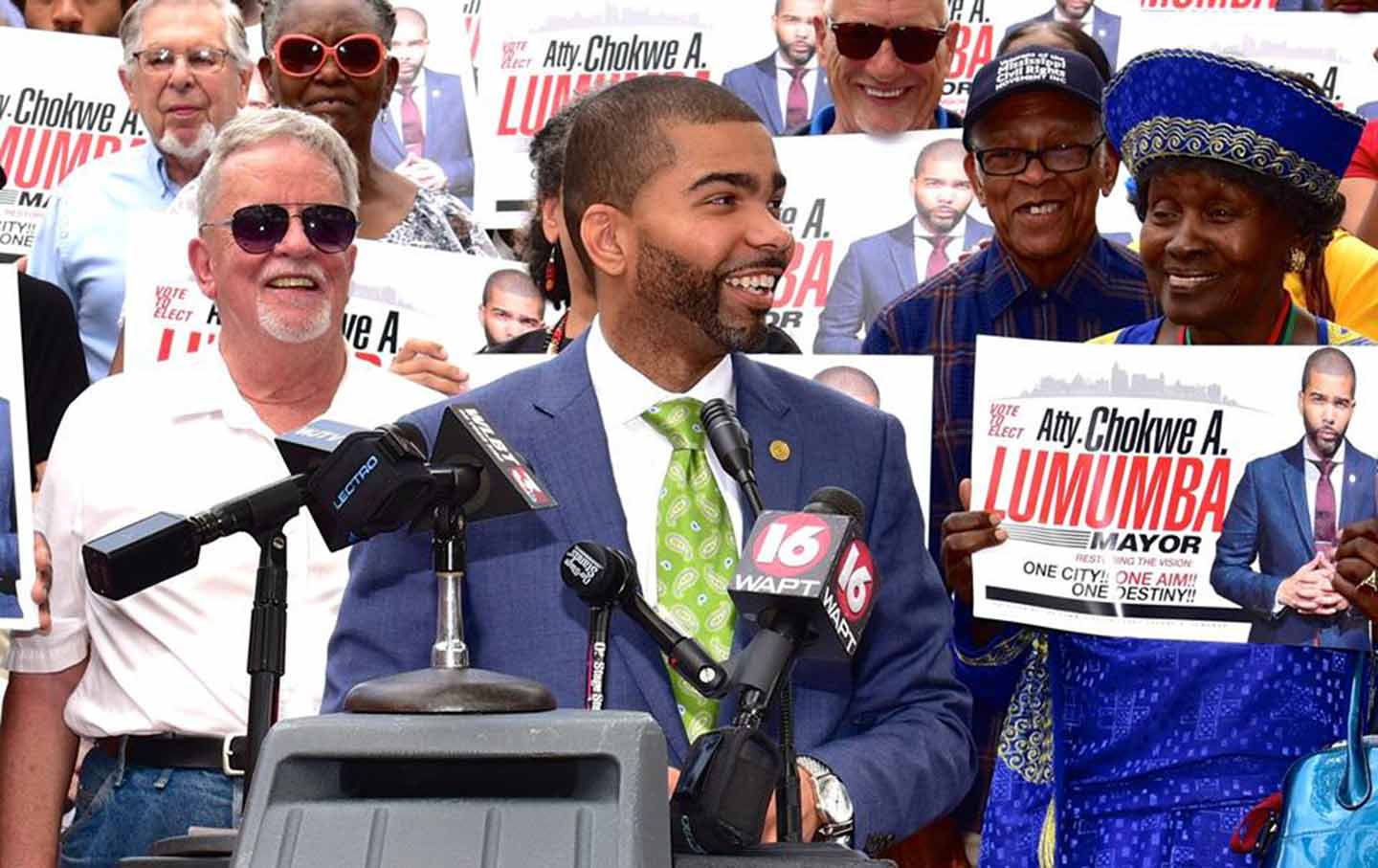 When Vermont Senator Bernie Sanders, NAACP president Cornell Williams Brooks, and actor Danny Glover joined thousands of Mississippians in marching for labor rights two months ago, economic and social justice activist Chokwe Antar Lumumba was in the thick of it. “I stand for workers’ rights,” Lumumba said, as the marchers converged on a Nissan plant where workers have been organizing for union protections. “[The] struggle does not cease and so we’re constantly in the battle of how we create self-determined lives for people. And we believe in human rights for human beings and you cannot support human rights if you’re not prepared to support workers’ rights. And so, we live in a world where you have so many with so little and so few with so much. And so, we’re trying to change that dynamic right here [in Mississippi]—we want to change the order of the world.”

The Washington-obsessed national media paid scant attention to that “March on Mississippi.” But it was big news in the state, sparking serious talk about the new wave of in-the-streets and at-the-polls activism that is sweeping the South. On Tuesday, that wave swept into Mississippi’s largest city, Jackson, where voters nominated Lumumba for mayor.

The 34-year-old attorney and son of Chokwe Lumumba, the epic Southern radical who served as mayor until his death in 2014, won big—grabbing 55 percent of the vote in a multi-candidate Democratic primary that included the incumbent mayor and other prominent local political figures. He is now all but assured of victory in the city’s June 6 general election.

Campaigning on the slogan “When I become mayor, you become mayor,” Lumumba promised to carry forward the vision outlined by his father, announcing, “With my candidacy I offer the People’s Platform that my father ran on and I co-authored. It is a platform which arises out of several years of discussion on human rights, political, economic, and social empowerment.” That platform’s message has been that people-powered strategies for using participatory democracy can achieve economic democracy.

The Lumumba vision represents a break from traditional approaches to local economic-development in that it begins with local people who need jobs and development, rather than with out-of-town corporations that demand tax breaks and privatization. The concept is that citizens can assemble to frame priorities, and that those priorities can be advanced using an “incubator fund” to help neighborhoods play a role in meeting their own economic and social needs.

The young lawyer highlighted his activist agenda, his involvement with the Coalition for Economic Justice and the Malcolm X Grassroots Movement, and his willingness to take the lead in struggles against entrenched power and entrenched ideas. “Chokwe Antar’s deep-seated commitment to his community expands beyond his career,” his campaign noted. “As a founding member of the Mississippi Human Rights Collective, he co-organized the ‘Stand Up to Take It Down’ rally at the State capitol to support the removal of the confederate insignia from the Mississippi State flag.”

That unsettled some of Lumumba’s foes. Mississippi Republicans were attacking him even before the primary. And he was substantially outspent by primary opponents.

Lumumba answered the critics and the big money with a landslide win that offers further evidence that a new Southern politics is developing at the local level in cities such as Jackson and South Fulton, Georgia, where #BlackLivesMatter and #Fightfor15 organizer khalid kamau won a striking victory in April. A member of Democratic Socialists of America and one of the many young Sanders delegates to last year’s Democratic National Convention, kamau won 67 percent of the vote in an April City Council contest.

The national Working Families Party tweeted that Lumumba’s primary victory was “a win for working families in Jackson & inspiring example for cities & communities across US.” Democracy for America chair Jim Dean is equally enthusiastic. “Chokwe Antar Lumumba wants to put Jackson’s government back in the hands of its residents, instead of giving away the city’s assets to corporate interests,” he declared. “His commitment to racial justice and municipal accountability is a model for the kind of leadership we need to see from more candidates up and down the ballot.”

Short of a General Strike, How Can Labor Stop Trump from Stealing the Election?