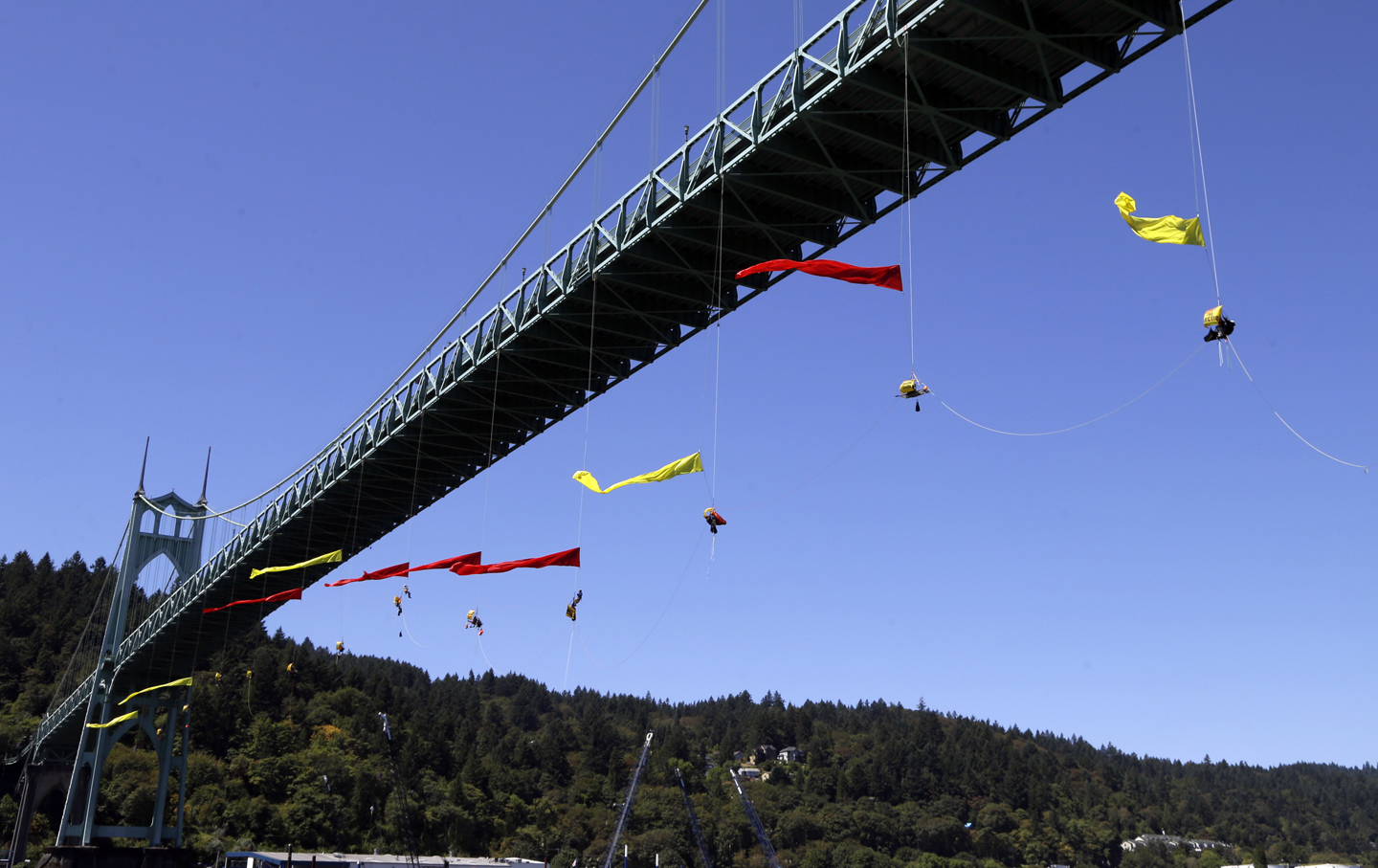 Activists in Portland, Oregon, protest the departure of a Shell icebreaker for the coast of Alaska. July 29, 2015. (AP Photo / Don Ryan)

We are living in a time of miracles and wonder
Don’t cry baby, don’t cry
It was a dry wind and it swept across the desert and it curled into the circle of birth
and the dead sand falling on the children and the mothers and the fathers
— Paul Simon

This article is adapted from a speech to be given by Tom Hayden at the National Bioneers Conference in San Rafael, California, on October 16, 2015.

Our world is being shaken by protest, resistance, and repression that we have not experienced since 1968 or 1936, or the late 19th century. It is too much for any of us to assimilate at once, so I recommend that everyone set aside their pre-existing assumptions, and for starters, read every story in The New York Times everyday, or I might say read between the lines. Facebook and Twitter are not enough. I have read the daily Times for 50 years, from the days when it promoted the Vietnam War to its disclosure of the Pentagon Papers in 1971, from its catering to climate deniers to its virtual war against them in recent years. If you have time, read Bill McKibben and Naomi Klein, but start your day by carefully reading through the Times.

This is the new generation’s moment in history.

We must calculate how best to lock in and build on the achievements of our movements over the last decade, including the historic decision by Shell to end its Arctic drilling. We cannot afford any loss to the gas-guzzling Republicans or servile, faltering Democrats, as happened when Reagan took office after Jimmy Carter and installed a right-wing fundamentalist, James Watt, as secretary of the interior, or when the Republican party drove Al Gore out of office on the fifth Supreme Court vote by Sandra Day O’Connor. It’s good to see more boldness and more unity among Senate Democrats these days, including Senator Maria Cantwell up in Washington state. Senate seats can be won in 2016 if we avoid repeating the debacle of division that happened in Colorado last time.

My heart is with Bernie Sanders at this point, and especially with the growth of a progressive bloc of Democrats led by the Elizabeth Warren, Sherrod Brown and Bill de Blasio. I can say that Joe Biden’s team is certainly planning to run. I worry about Hillary’s chances.

In California, the next governor and state senate must follow the positive historic precedents set by Jerry Brown and Senator Kevin de León on carbon reductions and environmental justice. In California the oil companies remain extremely powerful by funding opportunistic candidates claiming to create jobs—in Kern County where there already are 62,000 immigrant workers, where poverty and pollution and cancer and birth defects continue to be the legacy of exploitation.

I suffered a stroke on May 22 after tramping around the dark pits of fracking wastewater for two days in the suffocating wastelands of Kern County.

The rise of Kevin McCarthy from Bakersfield as Speaker is good news for the oil companies, but McCarthy’s district is one-third Latino, and high-tech industries are spreading there. No one should expect good news on climate out of McCarthy, but we shall see.

Let me now offer praise to Pope Francis, who takes his name from the hero of the environment, St. Francis of Assisi. Laudato Si’, mi Signore. Let us praise Brother Sun and Sister Moon!

Look, I have been critical of most Vatican doctrines on every issue going back to Vietnam. I was raised a Catholic during the fifties time of Cold War anti-communism when the Vietnam War lobby was led by American Catholics. I have painfully studied the 1486 Malleus Malifacarum, the Catholic Inquisition document explaining how to torture and burn thousands of women and plain heretics as demons. I have never approved of the canonization of Father Junipero Serra who colonized our native people. I believe his recent canonization was coupled with the canonization of the Archbishop of El Salvador, Oscar Romero, who was assassinated in broad daylight on his own Cathedral steps by religious fascists. The same forces murdered six nuns and priests in a Catholic chapel and churchyard in December 1980. I have visited both those sites of disgraceful murder.

Despite all this, I was inspired in 1960 by Pope John 23rd’s encyclical, Pacem in Terris, which led directly to the first nuclear-arms treaty between our government and the Soviet Union. That was achieved because of Women’s Strike for Peace and countless mothers who fought the lethal effects of Strontium 90 radiation on mothers, children, unborn children, and other living things.

I was profoundly awakened in 1968, the year of worldwide rebellions, by the Declaration of Latin America’s bishops who endorsed the doctrine of liberation theology with its preferential option for the poor. At the time, many of us were leaving universities to organize poor people in ghettos, barrios, and Appalachia. Priests and catechists were creating base communities of peasants, campesinos, and indigenous people everywhere in Latin America, translating the story of Jesus versus the Roman Empire into their very own languages for the first time. Now they were opposing the New Empire of conquest, massacres, and torture. Our Pope Francis was part of that continental storm, along with bishops riding burros into the “peripheries” of poor communities outside the glitzy world of overdevelopment.

Pope Francis has issued a historic encyclical, Laudato Si’, Mi Signore! I urge you not to read this on your handheld devices, but sit down, read and discuss it, especially among our more secular and skeptical friends. Disagree with whatever you may choose but remember its central message about the Urgency of Now.

The central message is that the road to removing greenhouse gases is the same as the path to social justice and development.

Those who study this message carefully should include wealthy environmental donors, and foundations. They are indispensible to the change, but need a change themselves. The Rockefeller Foundation has taken the lead in supporting environmental justice, climate activism, and divestment. From our humble beginnings 40 years ago, no one can doubt that we are gaining critical mass.

Amazing things have happened in California solar, renewables, and energy efficiency, where we lead the country and much of the world. The environmental justice movement here has been on the cutting edge. Signs of local progress are everywhere. Slashing emissions is vital to the health of our children, the elderly, and working people. We need to move forward with installing solar rooftop collectors as well as solar mirrors in the desert. Dodger Stadium and LAX need to step up. Capturing runoff from storms by using cisterns should be integral to neighborhood planning. Better pay, better working conditions, and apprenticeship programs are a must for community development. Greening our cities with projects like the billion-dollar LA River Restoration Project, a real restoration with minimum displacement of working-class families or gentrification can be a great leap forward.

The key is legislation carried by Senator De León and signed by Governor Brown that makes it a requirement of state policy that any emission reductions must carry co-equal benefits for disadvantaged communities. That means half the $2 or $3 billion in annual cap-and-trade revenues. California is spending $120 billion during four years on investments in the clean-energy economy. We are creating hundreds of thousands of jobs in clean energy, saving billions for consumers, and leading the country in meeting the United Nations emissions standards.

Governor Brown has taken the lead in encouraging a powerful Green Bloc of 24 states, including the Pacific Rim, the Midwest, the East Coast, and New England, plus British Columbia, Quebec, and there’s Germany and above all, several Chinese provinces representing billions of people. Governor Brown deserves credit for engaging and collaborating with Chinese leaders and scientists before the recent agreement between the United States and China at the UN.

With the pope, President Obama, and Xi Jinping, with Jerry Brown’s green bloc of regions, with the scientific communities present, this summit with turn out to be different from Copenhagen or Rio. It will require continued pressure and protests at the grassroots of all these regions to keep moving forward.

I am not sure that the oil companies have noticed, but they are winning a pyrrhic victory for polluters. Few have noticed these provisions of California law, among them:

– The law requires the steady supplanting of gasoline as the predominant transportation fuel in California. The law says that a principal goal is to improve the environment through energy efficiency, renewable energy, and “widespread transportation electrification.” The investor-owned utilities are primed to invest billions in this “market transformation.”

We have in law the most aggressive renewable-energy standards in the world, and a set of rules that ensure the new energy will also produce jobs, clean air, and economic benefits to communities in our state.

Don’t obsess about how little time we have to avert disastrous climate catastrophes, including drought, wildfires, floods, and war. They will happen. But remember that I’ve had a clock ticking towards midnight over the nuclear age for 50 years.

Think instead about unifying our ranks to every sector, in all the peripheries, from scientists at Stanford to engineers and industrial workers and those in our fields and inner cities. Remember the lyric of my wife, Barbara’s song, “Push that Rock”: Like Sisyphus, we have to keep pushing that rock from the bottom of the hill, “because in end the pushing makes us stronger.”