Leaders of Democratic and progressive fundraising organizations. (Courtesy of PowerPAC+)

The flaws in the foundation of the Democratic Party and the progressive movement made the entire edifice collapse last week.1

It is now imperative to totally transform the party and its allied organizations into true instruments of social change that harness the political power of the country’s demographic revolution. In the coming weeks and months, a new round of leaders and staff will be put in place to guide the Democratic Party into the 2018 and 2020 elections, and this is the moment to make radical changes in the strategies, spending, and staffing.2

The coalition that elected Obama—an overwhelming majority of people of color and a meaningful minority of whites—is in fact still the majority of people in the United States. While some members of the white working class likely did gravitate to Trump and Democrats should champion a much stronger agenda that addresses economic inequality, the larger lesson is that too many progressive whites and people of color stayed home, resulting in Clinton getting 2 million fewer votes nationally than Obama did in 2012.3

That is a failure of the entire Democratic and progressive ecosystem, and three fundamental flaws must be immediately addressed.4

Getting the Electorate Wrong5

Democrats’ first fatal flaw is operating on an inaccurate analysis of the electorate. Most party operatives and consultants think that white voters are the most important sector of the population, and they consequently prioritize trying to change the minds of white swing voters instead of working to organize, inspire, and engage people of color, who made up 46 percent of all Democratic voters in 2016.6

While some may dispute this characterization of party priorities, actions speak louder than words, and the action of allocating dollars this election cycle showed with crystal clarity which constituencies the party thinks are most important, and which are not.7

Of the more than $1 billion spent in this election, hundreds of millions of dollars were spent on television ads targeting swing voters. On the independent side, when plans for the first $100 million of outside spending were announced in the spring, no money was allocated for mobilization of black voters, who made up 23 percent of all registered Democratic voters in 2012. Eventually, $20 million was moved to efforts to turn out black voters, but that was still less than 10 percent of the more than $200 million spent by the outside groups.8

It should surprise no one that African-American turnout declined 10 percent from 2012 levels, contributing to the losses in Pennsylvania, Wisconsin, North Carolina, and Ohio.9

When the Clinton campaign turned its attention to Arizona in mid-October—where Latinos comprise 26 percent of the eligible voters—its stated plan was to spend $2 million on television ads. Clinton lost Arizona by 84,904 votes, but nearly 900,000 Latinos did not vote. That same $2 million could have paid for 6,000 organizers who could have turned out 200,000 Latino voters.10

This obsession with white swing voters is mathematically unsound and unsupported by data and evidence. There are fewer swing voters than at any time since 1965, when black folks were finally allowed to vote and the United States abandoned its official “whites only” immigration policy. Michigan State Professor Corwin Smidt’s 2015 study showed that just 5 percent of voters are “swing” voters. That’s about 6 million people. Comparatively, 25 million people of color were eligible to vote in 2012 but didn’t cast ballots, and the problem was even bigger last week—10 percent fewer African Americans voted this year than in 2012.11

Why would Democrats lavish so many resources on the shrinking sector while ignoring the swelling ranks of people of color? Because the fundamental strategy is steeped in implicit bias, old habits, and is fatally flawed. 12

The party’s second structural flaw is an extension of the first: It is wasting hundreds of millions of dollars on television ads, instead of sinking deep roots in the communities of color that comprise the cornerstone of a lasting progressive electoral and demographic majority. In this year’s election, nearly $300 million was spent on television ads by the Clinton campaign and the outside groups. It’s been said repeatedly—without contradiction—that there is very little evidence that such ads work.14

What has been proven to work is in-person, personal contact, but that is not where the lion’s share of the party’s money goes. That $200 million could pay for enough permanent, neighborhood-based organizers to turn Arizona, Georgia, and even Texas purple and then blue over the next few years. But, instead, last-minute, unmemorable, and ineffective ads remain the party’s tool of choice.15

The Near-Apartheid Structure of the Democratic Party16

The reason that the strategy and spending is so misguided and wasteful stems from the third structural flaw: the almost apartheid-like structure of the Democratic Party and progressive movement. The monochromatic composition of those who control most of the money in progressive politics more closely resembles old South Africa and not the rainbow coalition of voters who elected Obama and Clinton. The leaders and top staff of the Democratic Party and the progressive movement do not reflect the racial diversity of the party’s base. These managers, in turn, do not possess the cultural competence to run effective campaigns in a racially polarized electorate.17

While “apartheid” language might sound harsh, looking at the structure of the progressive movement shows a glaring gulf between the composition of the people and the color of those in charge. Prior to Debbie Wasserman Schultz’s resignation as chair of the Democratic National Committee, and with the notable exception of Congressman Ben Ray Luján at the Democratic Congressional Campaign Committee, nearly the entire top level of progressive leadership that controlled $1.5 billion in spending was made up of white people. The following table illustrates the problem. (The listed numbers are the budget of each organization.)18 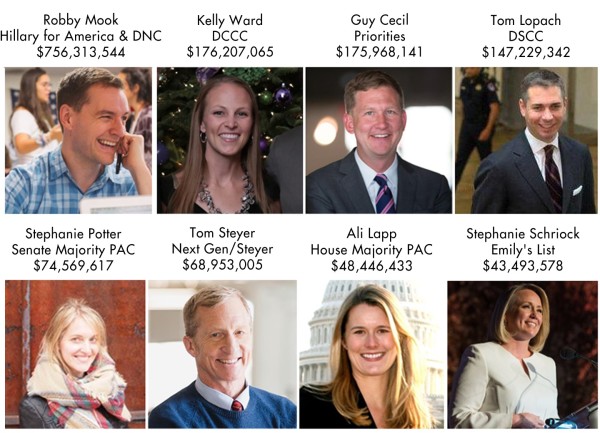 Leaders of Democratic and progressive fundraising organizations and how much they contributed to this year’s campaign. (Courtesy of PowerPAC+)

All of the individuals in the above table are good people, but none of them are from the hood. They don’t hang out in black barbershops and beauty salons. They don’t feel their hearts race when they see a police car’s lights shining in their rear view mirror. They don’t have family facing deportation to Mexico. They’ve never been told to “go back to where you came from,” called a racial slur, or told to speak English. They’ve never been detained at an airport because they look suspicious. They haven’t lived the experiences of the people who comprise almost half of all Democratic voters.19

To win elections in an increasingly multiracial nation requires leadership and top staff who come from, understand, and are committed to the rapidly growing communities of color that are transforming the composition of the country.20

In the coming weeks and months, new leadership will be put in place in the institutions and organizations that will control hundreds of millions of dollars in future campaign spending. This is an opportunity that must not be missed, and fortunately, many people are rallying to the cause, standing up, and saying enough is enough.21

I’ve been proud to help create the Democracy in Color campaign, and lend my voice to a national coalition of organizations and individuals who have issued a Declaration for the Transformation of the Democratic Party that calls for appointing leaders who look like America, are committed to investing in communities of color, and determined to implement a strategy that is aligned with the demographic revolution. Decisions about who will lead progressive and Democratic institutions will speak volumes about how much the party understands and is committed to making changes.22

As last week’s election revealed, the foundation of the Democratic home is structurally unsound. The time is now to focus on and fix the problem, and the first step in that direction is putting in place party leadership who understand how to build power and win elections in a racially combustible environment. Given the determination of our opposition to roll back all the progress of the past 50 years, the country is counting on us. We need to get this right.23