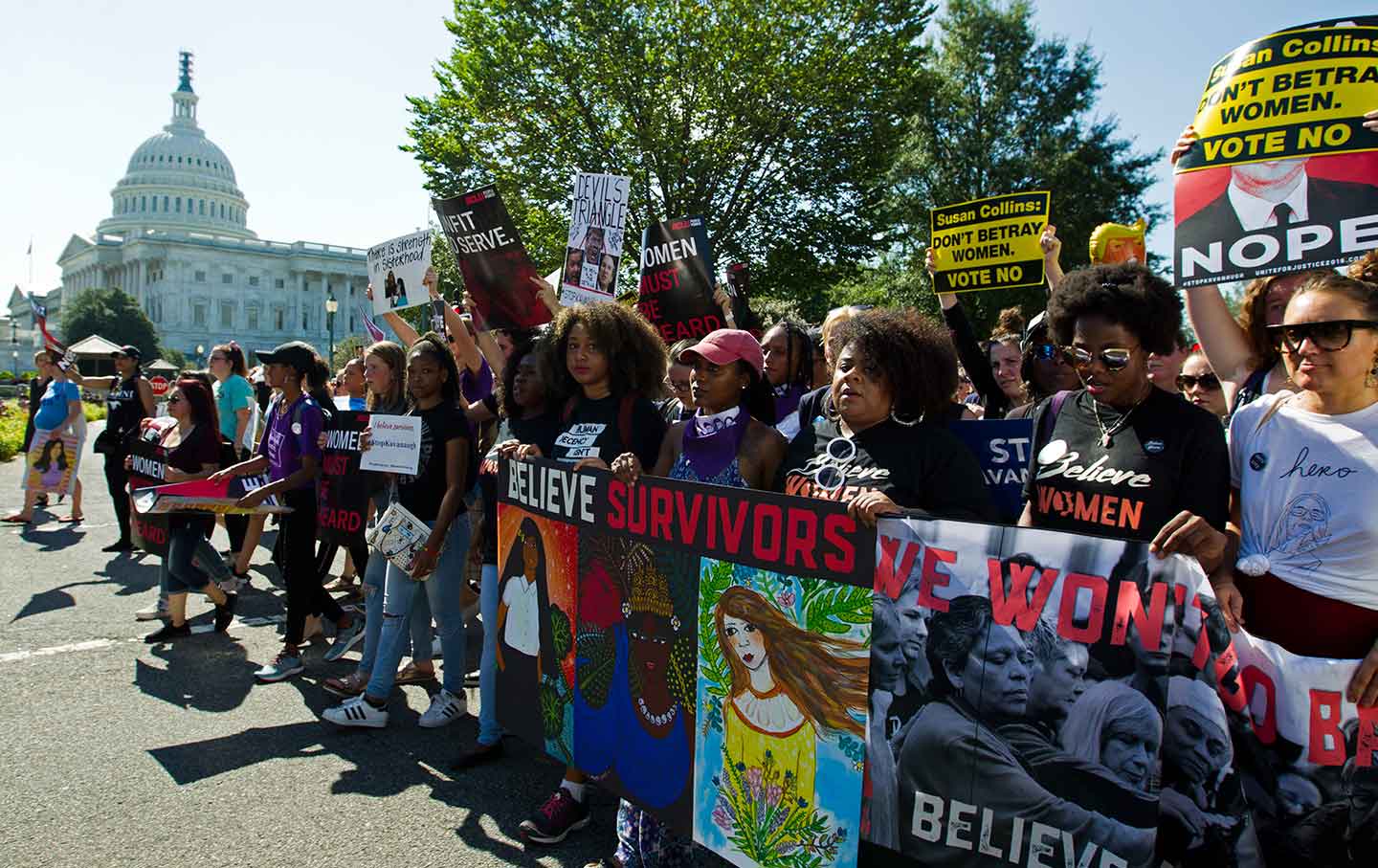 This country is in the grips of a defiant surge of protest against the nomination of Brett Kavanaugh, a mass, coast-to-coast rebellion—and it’s being led and supported overwhelmingly by women.

Over the past several weeks, thousands of women have come forward to organize their communities and share their stories of surviving sexual assault. They have argued powerfully that a man who has perpetrated such an act and refused to take responsibility has no place on the Supreme Court. They have told these stories outside district offices from Anchorage to Miami, and inside the Capitol—including, yes, in an elevator. They are challenging notions of power and leadership through connection, vulnerability, and ferocious bravery.

But while women have been putting their lives on hold and their bodies on the line, where have the men been?

It’s not as if men don’t have anything at stake. Brett Kavanaugh represents a clear threat to our democracy. His confirmation would likely lead to the rollback of women’s rights, access to health care, workers’ rights, and more. And his alleged assaults and callous disregard for those who have shared their difficult truths is simply disqualifying—a truth that should be obvious not only to any man who knows and cares about a woman who has survived sexual assault, but also to any man with a working conscience.

Through our work as organizers with two of the organizations involved in the Kavanaugh pushback, we’ve had an opportunity to witness the protests up close. And from what we’ve observed, men have been the clear minority of participants. Yet again. As during last year’s fight to defend the Affordable Care Act and resist Trump’s tax giveaway to billionaires, the vast majority of the people we’ve seen taking to the streets have been women. Last Friday in the Hart Senate Building, for instance, perhaps 20 of the more than 200 people gathered were men. In the Supreme Court fight, with the future of Roe v. Wade and sexual assault at the center of the fight, perhaps this doesn’t come as a surprise to many. But men need to start showing up—and showing up often.

To be clear: We believe that those most affected by dangerous policies and political decisions should be at the center of resisting them. These protests belong to women, and there is no way men could have done what women have done these last few weeks—women like Jennifer Flynn Walker, Linda Sarsour, and Tracey Corder who have been leading on-ground-efforts, and those like Dr. Christine Blasey Ford, Maria Gallagher, and Ana María Archila who have transformed the national discussion through sharing their stories.

So this women-led movement does not need men to come in to lead. We’ve dominated the political conversation in this country far too much already. But the moment does call for more of us to join the fight. The nonstop organizing and protest being led by women is exhausting, particularly when it is coupled with the trauma and pain for of revealing the most vulnerable stories of their lives.

Women are putting in a lot of work. They’re reliving their worst memories so that we can better understand how pervasive and damaging the problem is. In return, it’s our responsibility to listen, to believe, and to support their efforts in every way we can. We must recognize the heavy emotional labor survivors of sexual assault undertake to tell and retell their stories. The women at the center of these protests have jobs, families, and other needs as well, and the movement needs reinforcements.

That’s why men have to step up by showing up, but also, once they arrive, be comfortable stepping back into supporting roles. In our patriarchal-to-the-core society, we’re trained from a young age, explicitly and implicitly, to believe that our voices are the ones that matter—and that women should show deference. We need to commit to confronting that bad training, and instead listening and supporting women’s leadership.

In practical terms, this means being willing to hold the camera outside an elevator while women share their stories in front of the cameras; to pick up the pizza instead of speaking at the press conference; and to help manage crowds while others march and chant. And, at every moment, it means focusing on listening—listening to people’s stories, responding to their needs, and providing whatever support is needed.

We have enough mansplainers in Congress—and there’s another one who we definitely need to prevent from sitting on the Supreme Court. Men can and must stand up for what they believe by showing up in the fights that matter, but we need to rally behind women’s leadership.

In the coming days, women will continue to fight to stop the Kavanaugh nomination. We hope more men will join their struggle—which is also our struggle. Bring a sign. Bring a friend. And be ready to listen.