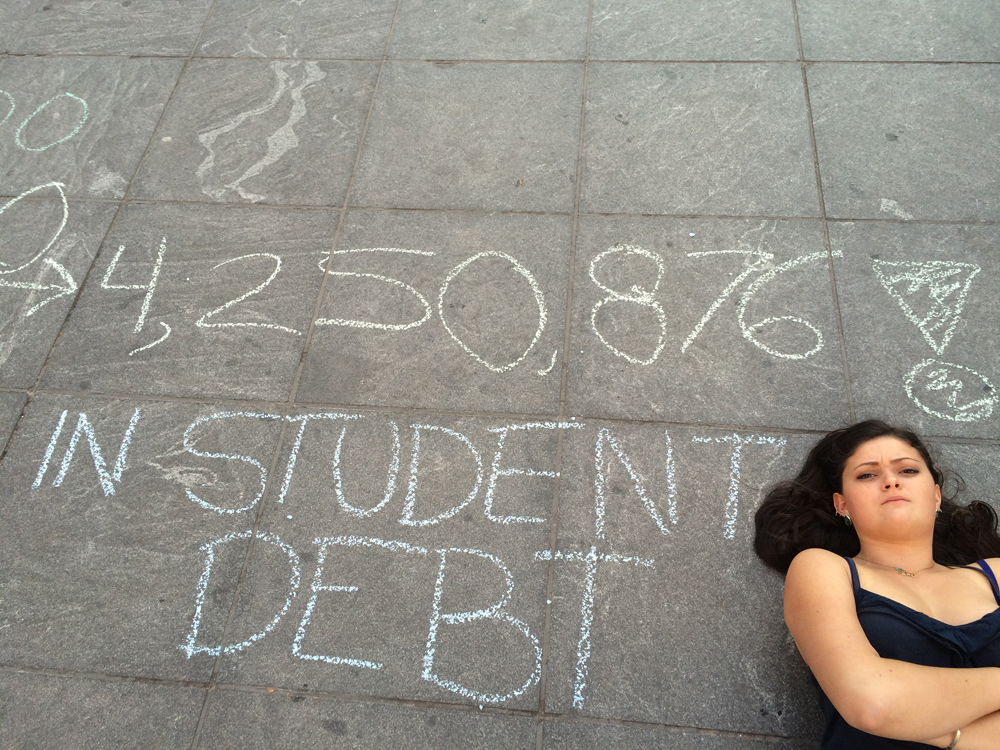 An NYU student at an action to protest student debt called "Coming Out of the Debt Closet." (Photo courtesy of the NYU Queer Union)

This piece originally appeared at the NYU Local and is reposted here with permission.

Yesterday, in the shadow of Washington Square Park’s arc de triomphe, sixty NYU students stepped bravely out of the Debt Closet. This event, the enterprising lovechild of NYU’s Student & Labor Action Movement (SLAM) and the Queer Union, marked the second anniversary of “Coming Out of the Debt Closet,” a project aimed at breaking the silence of student debt.

For many of us, the word “debt” is a dirty word, tabooed in casual conversation. We don’t like to think about it, and we certainly don’t like to talk about it. This, however, is exactly the stigma “Coming Out of the Debt Closet” strives to eradicate. The project, as Queer Union e-board member AJ Stone Jonathan put it, is about “making that symbolic step towards breaking the silence which surrounds student debt.

“If you don’t talk about it, things aren’t going to change,” they added.

And, as the statistics from yesterday show, things need to change. From the mere 60 participants of this year’s event, SLAM and Queer Union calculated a net debt to the tune of $4,256,876—that averages to $70,950 per student. The staggering height of these numbers makes them almost abstract, distant from the everyday reality of Bobst all-nighters and street cart dumplings. There is nothing abstract, however, about the implications of a 70,000 dollar set-back upon graduating college.

At the current juncture, NYU appears to be doing little to help its students with their debilitating debt. Most of the “extra” resources of the university instead are filtered into ‘emergency funds,’ our sites abroad, and, of course, the infamous 2031 plan. The obscene figures of the venture—such as $6 billion in total expenditure—reveal, perhaps, the reason for our laughable financial aid and expansive tuition.

With “Coming Out of the Debt Closet,” SLAM and the Queer Union are also acting against this stagnancy in the administration’s stand on student debt. They strongly believe an education should not be the financial burden it has become. Above all, however, they want to get students talking, and talking early. They want to eradicate the stigma from its source. To do this, they need the voices of NYU students, current and past. As Queer Union secretary Olivia Creamer put it with solemn conviction, the issue is “everyone’s problem, and everyone needs to work together to do something about it.”

To get involved with the discussion of student debt, reach out to SLAM, speak up, and make a stand.