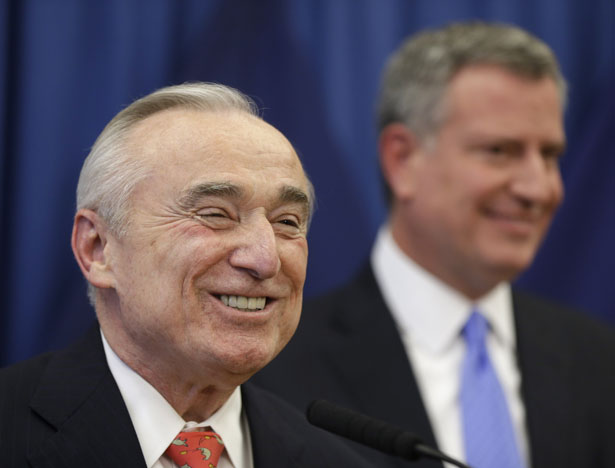 One of Mayor Bill de Blasio’s first acts after being elected this past November was to reappoint William Bratton as commissioner of New York City’s police department. Bratton’s reputation rests on his work, in New York and Los Angeles, as a proponent of so-called “broken windows” policing. He asserts that aggressively going after very minor offenses—not merely misdemeanors but infractions like littering, sitting on stoops and carrying open beer cans—will bring the overall rate of violent crime down as well. It is this program that has led to the stopping, frisking and general harassing of millions of New Yorkers, the overwhelming majority without probable cause.

There were 4.4 million stops by the NYPD between 2004 and 2012. Ten percent of those stops were of whites, 84 percent were of blacks and Latinos. Of those 4.4 million stops, only 6 percent led to an arrest, 6 percent to a summons. The remaining 88 percent resulted in no other action—in other words, they involved unequivocally innocent people.

One of the most tireless and insightful interrogators of broken windows policing is Harry Levine of the Marijuana Arrest Research Project, who describes it as a practice of focusing “police resources on making many stop and frisks, writing many summonses for minor offenses, and making many arrests for minor misdemeanors.” Evidence of its effectiveness in reducing violent crime is thin (better evidence suggests that lowered crime rates have more to do with the subsidence of the crack epidemic). Yet the practice is widespread in the United States. Says Levine, ”Minor-offense-focused policing gives police commanders something to do with their troops.” Plus, he adds, “it’s an effective solution to the manpower problems created by the national and international decline in reported serious and violent crime.”

Levine is the author, with civil rights attorney Loren Siegel, of a new study, forthcoming next month, on the disproportionate numbers and rates of criminal summonses for riding bicycles on the sidewalk. “Take just three neighborhoods in Brooklyn,” says Levine. “From 2008 through 2011, Park Slope (Precinct 78) averaged eight bike-on-sidewalk summonses a year, Ocean Hill–Brownsville (Precinct 73) averaged 1,062 and Bedford–Stuyvesant (Precinct 79) averaged 2,050.” As one might guess, Park Slope is a mostly white neighborhood; Ocean Hill–Brownsville is 90 percent black and Latino; Bedford–Stuyvesant is 80 percent black and Latino.

This zero tolerance of minor offenses is enforced only some communities. We’ve all heard stories about children suspended from school for having nail clippers or ibuprofin in their backpacks. Living in New York can be exactly like that—but only if you’re black or Latino. No matter how many times you slowly pedal your bike on an empty sidewalk, you probably never dream you could be criminally cited, if you happen to live in a predominantly white neighborhood.

The problem is twofold. First, broken windows policing, begun under Giuliani, was powered up under Bloomberg. Poor minority neighborhoods were flooded with officers, their productivity measured by quotas for stops, criminal summonses and arrests. The second problem is that criminal summonses are pink slips that look very much like the ticket one might get for an expired parking meter. Many people mistake them for precisely that; but they require an appearance in court, not sending in a fine. If you fail to show, an arrest warrant is issued. There are approximately a million outstanding arrest warrants for nontraffic summonses in New York. As the Daily News reported in February 2013, if all of them were acted on, one in eight residents would be subject to immediate arrest and jail.

So here are some suggestions for Mayor de Blasio and Commissioner Bratton:

1. End “productivity measures” for minor offenses. No doubt a strong police presence by itself may deter and control crime. But it is questionable whether summoning half a million people a year for minor infractions—then dismissing more than half of them—is remotely justifiable. If this level of disruption is truly necessary, then eliminate the disproportionate burden on targeted communities. Start ticketing and arresting in all precincts, not just poor minority neighborhoods.

2. Take seriously the research on a range of policing policies and their numerous effects, and make public much more data so policing strategies can be publicly reviewed and debated. Yes, there are many around City Hall who remain convinced that broken windows policing is causal rather than incidentally correlative, but good policy can’t be based on superstition. US crime rates have declined, including in cities without such tactics. The resistance to facts about crime reduction is as blindly irrational as climate change denial.

3. Judges are crucially positioned to curb the unfairness of such disparities. Brooklyn Judge Noach Dear is a model in this regard. He took a stand after years of seeing open-container violations brought exclusively against black and Latino men. “As hard as I try, I cannot recall ever arraigning a white defendant for such a violation,” he said, and then declared that the NYPD can no longer rely on a “sniff test” as evidence; it must prove, with lab results, that those they cite are drinking not just alcohol, but alcohol that contains more than the legally allowed .05 percent by volume.

4. Similarly, prosecutors, defense attorneys and other officers of the court must stop treating summonses and warrants as though they are of no consequence. The mere fact of an arrest—even without a conviction—can affect one’s immigration status as well as one’s ability to stay in public housing, school or in a job.

New Yorkers have lived in the shadow of broken windows policing for two decades, during which time the policy has intimidated, dispossessed and humiliated millions of innocent people. It not only divides New York; it creates two Americas.