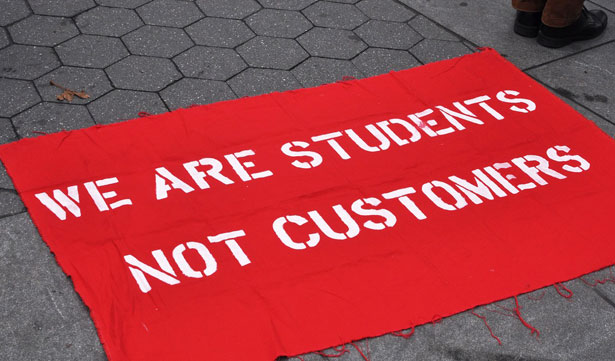 A banner at a protest at Cooper Union in New York City on December 8, 2012 (Flickr/Michael Fleshman)

This piece originally appeared at Youngist and is reposted here with permission.

For more than year, the Student Labor Action Project (SLAP)—alongside coalition partners, including the American Federation of Teachers, National Education Association and the US Student Association—has been calling for the Department of Education to cancel its $100 million annual contract with Sallie Mae. But the department has claimed that no “wholesale” violation occurred that would justify ending the contract.

Last year, only after three hundred students demanded that Secretary Arne Duncan meet with them at the US Student Association’s Legislative Conference in March 2013, SLAP students were given a meeting with senior officials at the Department of Education. In this meeting, Secretary Arne Duncan stated that the Department wouldn’t do business with corporations that broke the law.

But, it’s clear that Sallie Mae broke the law. On May 13, 2014, Sallie Mae reached settlements with the Department of Justice and Federal Deposit Insurance Corporation to pay $97 million in fines and restitution to student loan borrowers for violating multiple federal laws. With these settlements, federal agencies are fining Sallie Mae for overcharging active-duty service members on interest rates, deceiving borrowers when processing payments, and engaging in discriminatory practices.

Students are now calling for an immediate end to this contract with new outrageous evidence from federal investigators. The Department of Justice described Sallie Mae’s conduct as “intentional” and “willful”—yet the Department of Education has taken no action. Students are continuing the fight for a debt-free future by urging Secretary Duncan to stop spending hundreds of millions of taxpayers’ dollars on a company that breaks the law.

Secretary Duncan’s colleagues from other federal agencies have found that Sallie Mae has cheated borrowers. Over 50,000 people have taken action to tell the Department that they’ve had enough! It’s time for students to keep up the pressure on Secretary Duncan to cut the department’s contract with Sallie Mae. This summer, the fight continues as students and borrowers unite to make the Department of Education work for us!