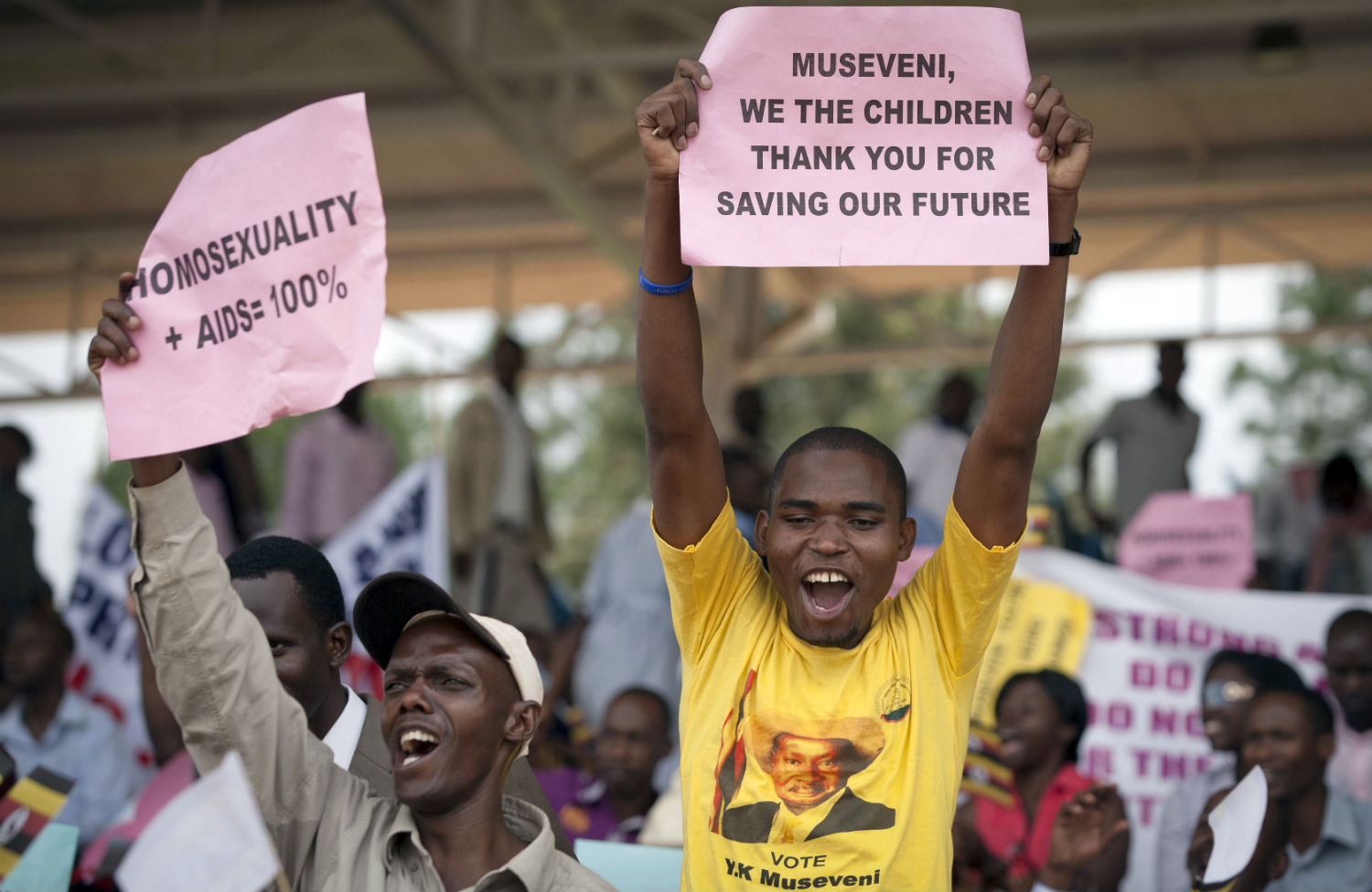 In Uganda, being gay can now earn you a lifetime in prison.

In February, the East African country was again thrust into the international spotlight after President Yoweri Museveni signed into law a draconian bill that criminalized homosexuality. The high profile, on-and-off battle over the so-called “kill the gays” bill has drawn headlines for years as the most extreme example in a wave of antigay legislation on the continent. But homophobia in Africa is not merely an African problem.

As the gay rights movement has gained traction in the United States, the more virulently homophobic ideologies of the religious right have been pushed further out of the mainstream and into fringe territory. But as their influence has waned at home, right-wing evangelists from the United States have been flexing their sanctimonious muscles influencing policymakers in Africa.

For years now, evangelical activists from the United States have been injecting themselves into African politics, speaking out against homosexuality and cheering on antigay legislation on the continent. The influence of these groups has been well documented in Uganda. The now-defunct Exodus International, for example, sent Don Schmierer, a board member, to Uganda in 2009 to speak at a conference alongside Scott Lively, a pastor who was later sued by a Ugandan gay rights group for his role in promoting human rights violations against LGBTQ people. The two participated in a disturbing antigay conference, where speakers blamed homosexuals for the rise of Nazism and the Rwandan genocide, among other abhorrent acts. Tony Perkins of the Family Research Council, a hard-right Christian group that is active in US politics as well, similarly supported antigay laws in Uganda. At the peak of the controversy over the “kill the gays” bill, Perkins praised the Ugandan president for “leading his nation to repentance.”

But such groups aren’t just active in Uganda. They have promoted antigay legislation in Kenya, Nigeria and Zimbabwe, just to name a few other places. The support ranges from popular agitation and sideline cheerleading to outright intervention.

In 2010, for example, when Zimbabwe began the process of drafting a new constitution, the American Center for Law and Justice (ACLJ), a Christian law firm founded by evangelist Pat Robertson, launched a Zimbabwean counterpart called the African Centre for Law and Justice. The outpost trained lawyers for the express purpose of putting a Christian stamp on the draft of the new constitution.

The African Centre joined forces with the Evangelical Fellowship of Zimbabwe (EFZ), an indigenous organization, to promote constitutional language affirming that Zimbabwe is a Christian nation and ensuring that homosexuality remained illegal. These and other hardline views are outlined in a pamphlet distributed by the EFZ and ACLJ. Jordan Sekulow, the executive director of ACLJ, announced that his organization would lobby for Zimbabwean President Robert Mugabe in political and religious circles in the event of any controversy over the provisions, despite the fact that Mugabe has been sanctioned by the United States and the European Union for violating human rights. Last year, Zimbabwe’s new constitution, which includes a ban on gay marriage, was approved by an overwhelming popular vote.

ACLJ’s Kenya-based offshoot, the East African Center for Law and Justice (EACLJ), lobbied against Kenya’s progressive new constitution as well. In April 2010, a report on the group’s website called homosexuality “unacceptable” and “foreign” and called for the Kenyan constitution to clearly define marriage as between a man and a woman, thus closing the door on future laws that could attempt to legalize same-sex marriage. In this case the EACLJ was unsuccessful, and the new constitution was approved without any language regarding same-sex marriage.

In 1960, Robertson created the Christian Broadcasting Network (CBN), which broadcasts through cable and satellite to over 200 countries. Robertson is a co-host on the 700 Club, arguably CBN’s most popular show. From his perch on the show, Robertson has made a seemingly endless variety of inflammatory remarks about LGBTQ people and just about everyone else that does not fall in line with his own religious thinking.

In the United States, Robertson’s vitriol can be brushed aside as the antiquated ravings of a fringe figure. Not so in much of Africa. A survey conducted in 2010 found that 74 million people in Nigeria, Africa’s most populous country, had watched at least one CBN show in the previous year. That’s a remarkable reach, considering Nigeria is home to about 80 million Christians in all.

Robertson’s influence plays into an increasingly hostile political climate for gays in the country. Last January, President Goodluck Jonathan signed into law the Same-Sex Marriage Prohibition Act, which provides punishments of up to fourteen years' imprisonment for a gay marriage and up to ten years for membership in or encouragement of gay clubs and organizations. The enactment of the law was followed by a wave of arrests of gay men—and widespread denunciation from the international community.

The religious right, however, doesn’t see Nigerian laws regarding homosexuality as a gross violation of human rights but rather as protection of “traditional marriage.” In 2011, on the heels of the Nigerian Senate passing an earlier version of the antigay law, President Obama announced that the United States would officially promote LGBTQ rights abroad as part of its development framework. In response, the Catholic Family and Human Rights Institute denounced the administration’s directive for putting “U.S. foreign policy on a collision course with religious freedom.”

MassResistance, a Massachusetts-based organization that bills itself as a “pro-family” activist group, praised Nigeria when the Nigerian House passed an earlier version of the bill that President Jonathan signed into law on January 7. In a statement, the group said that African nations are “feeling the brunt” of the gay rights movement, claiming that the “huge spread of AIDS” and the “breakdown in society caused by the homosexual movement seems to bring more general social destruction in African cultures than in the West.” Antigay laws in Nigeria have enjoyed unequivocal support from some hardline evangelical groups in the United States, with some going so far as to travel to Nigeria to spread antigay sentiment.

One such group is the “pro-family” advocacy group Family Watch International. Formed in 1999 and headed by Sharon Slater, FWI boasts members and supporters from over 170 countries. In 2011, Slater was the keynote speaker at a meeting of the Nigerian Bar Association, where she touted her beliefs on homosexuality, telling delegates that they would no longer have religious freedom and that homosexuals would prey on their children if they supported “fictitious sexual rights.” To Slater and her ilk, the rights of LGBTQ people are imaginary.

FWI even wields influence within the United Nations. In early 2011, FWI co-hosted a “Global Family Policy Forum” in Phoenix. Over the two-day event, FWI coached twenty-six UN staffers from twenty-three different countries in attendance on how to resist UN initiatives on gay rights. An FWI newsletter claimed that conference attendees were finally hearing scientific and clinical “evidence” that homosexuality was not genetically determined and could be cured by therapy.

To some, the belief that homosexuality is a disease that needs to be cured may seem too ridiculous to even entertain. But if the devout can’t win at home, they’ll take their message abroad. It’s up to the international community and African activists dedicated to human rights to put an end to this export of hate.