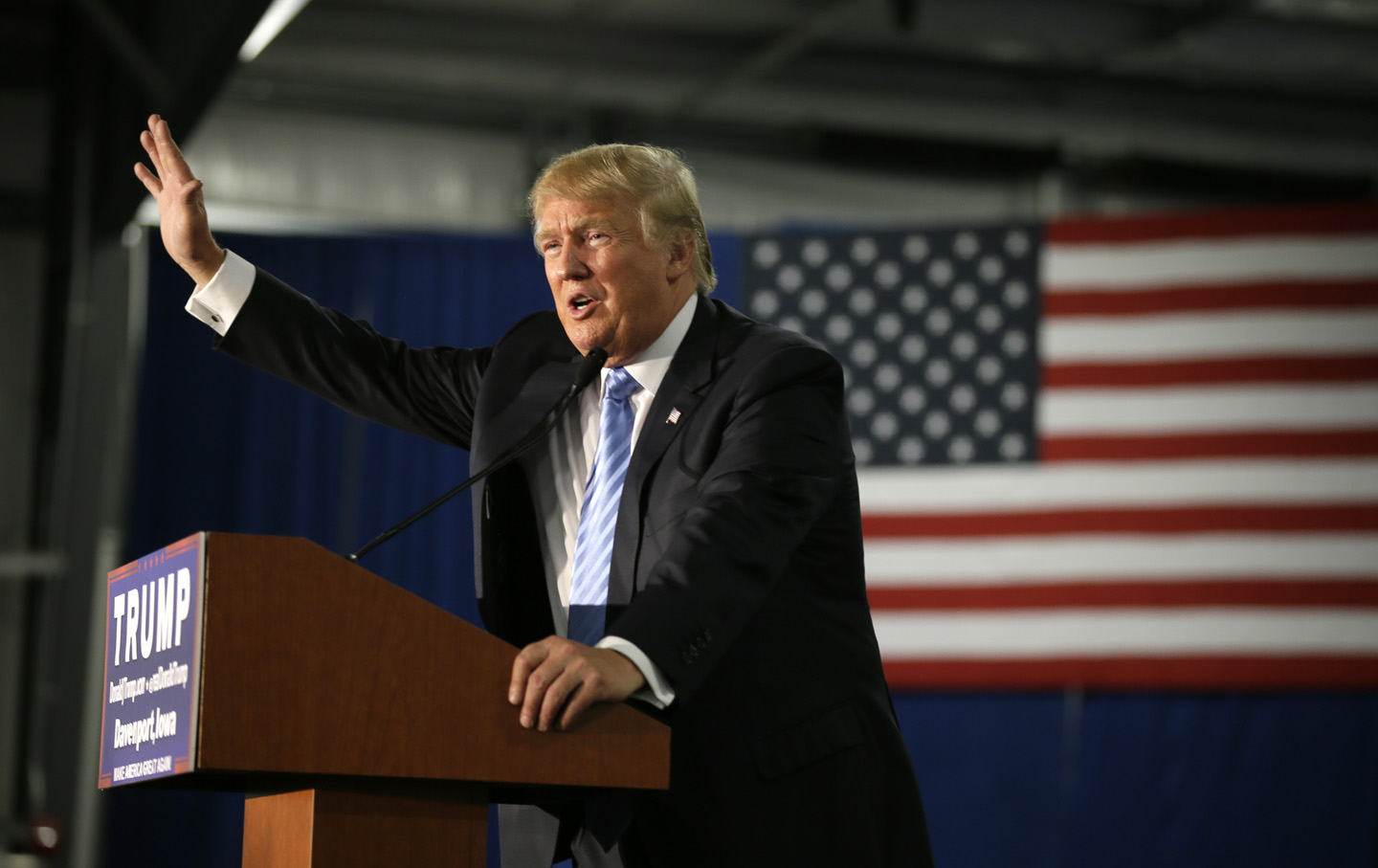 But it cannot be both.

While the first Republican president called upon “the better angels of our nature,” Trump peddles the worst dogma.

Trump is now the clear front-runner for the Republican presidential nomination. That does not mean that he will be the party’s 2016 nominee. But it does mean that Republican leaders must make clear their position as regards a Trump-led GOP ticket.

A failure to reject the billionaire’s vile bigotry at this relatively early stage of the campaign cedes the fight for the soul of the party to Trump. Unless responsible Republicans clearly and unequivocally disavow the billionaire now, they are effectively saying that the party is prepared to accept Trump or, at the very least, Trumpism.

Trump has invited a formal rebuke for months, with his crude attacks on immigrants, his false statements about African Americans, his absolute distortions regarding American Muslims. But his proposal for “a total and complete shutdown of Muslims entering the United States” has crossed new lines of extremism.

As former Maryland governor Martin O’Malley, a Democratic presidential contender, says, Trump’s latest tirade “removes all doubt: he is running for President as a fascist demagogue.”

Trump’s rivals for the Republican nomination responded to Monday’s outbursts with criticism that ranged from the tepid (Ted Cruz: “Well, that is not my policy”) to the noxious (Carly Fiorina: “Trump’s overreaction is as dangerous as President Obama’s under-reaction”).

Republican National Committee chair Reince Priebus was silent for a day after Trump’s assault on the historic American premise that this country ought not establish religious tests. Finally, the RNC chair mustered a response: “I don’t agree.”

House Speaker Paul Ryan was similarly delayed in his response, if somewhat firmer. On Tuesday morning, Ryan suggested that Trump’s stance is “not who we are as a party” and “not conservatism.” Yet, bizarrely, the speaker responded to a question about whether he would back Trump as the party’s 2016 nominee by saying: “I’m going to support whoever the Republican nominee is and I’m going to stand up for what I believe in as I do that.”

Some state-level Republicans were clearer and steadier in their criticisms of Trump. Jennifer Horn, the chairman of the New Hampshire Republican Party, has condemned Trump’s bigotry as “unconstitutional” and “un-American.”

She also says that it is “un-Republican.”

Declaring that Trumpism is antithetical to Republicanism has to be the starting point for any serious response to Trump by Republicans. Personal jabs (Jeb Bush says the front-runner is “unhinged” and “not serious”) and descriptive rhetoric (John Kasich is babbling about Trump’s “outrageous divisiveness”) doesn’t count for much.

Republican candidates and party leaders need to disavow Trump and declare that, if he is the GOP nominee, they will not back him.

There is nothing complicated about setting such a standard—although Republican contenders such as Jeb Bush and Marco Rubio would have to abandon their past commitments to support Trump.

And there are plenty of precedents for partisans rejecting an extreme standard-bearer.

Members of both major political parties have refused to back nominees—often at significant sacrifice to themselves. Democratic Congressman Charles Weltner, a courageous southern supporter of civil rights, gave up his place on the Georgia Democratic Party ticket in 1966 (and, as such, his safe seat) because he could not obey the party’s requirement that he back segregationist Lester Maddox for governor.

Two years earlier, many of the nation’s most prominent Republicans distanced themselves from a party nominee who had voted (albeit reluctantly) against the Civil Rights Act of 1964 and who was seen as being too extreme in his stances and alliances.

In 1964, Arizona Senator Barry Goldwater and his supporters had taken full advantage of divisions among mainstream Republicans, while capitalizing on a rise in right-wing enthusiasm in many state parties. He secured the GOP presidential nomination at a raucous and bombastic convention. A number of moderate and liberal Republicans refused to support Goldwater. Some simply went silent. Others declared explicitly that they could not and would not endorse Goldwater.

Famously, in the summer of 1964, New York Congressman John Lindsay, a Republican rising star, rejected his party’s nominee. Though he sought reelection as Republican that year, Lindsay said, “I have no choice but to run in this election on my own record without reference to the national ticket. To do otherwise, as long as these circumstances exist, would be to retreat from principle…and [from] the historic Republican Party principles that I represent.”

In Massachusetts that same year, Republican Attorney General Edward Brooke announced that he would not support Goldwater, citing the vote against the Civil Rights Act and concerns about the growing influence of right-wing extremists on the party. Brooke, the nation’s most prominent African-American Republican at the time, absolutely refused to back Goldwater—arguing that “You can’t say the Negro left the Republican Party; the Negro feels he was evicted from the Republican Party.”

Responsible Republicans did the right thing; and they and their party survived politically.

In fairness to Barry Goldwater, he was a far more mainstream Republican in 1964 than Trump is today. Goldwater was exceptionally conservative, but he was also reasonably rational. He would eventually find himself calling out and disavowing Republican extremism—to such an extent that, in 1992, Goldwater backed Democrat Karan English over an extreme Republican in a race for an open Arizona US House seat.

The Republican standard for holding Trump to account has already been set—by Goldwater’s detractors, and by Goldwater. There are points where Republicans can and must reject extremist candidates and extremist politics.

That standard is not met when Republicans call Trump “unhinged” or suggest that they are prepared to offer Americans a kinder, gentler version of Trumpism.

That standard is met when Republican presidential candidates and party leaders declare, as Republicans, that they cannot and will not support a national party ticket led by Donald Trump.