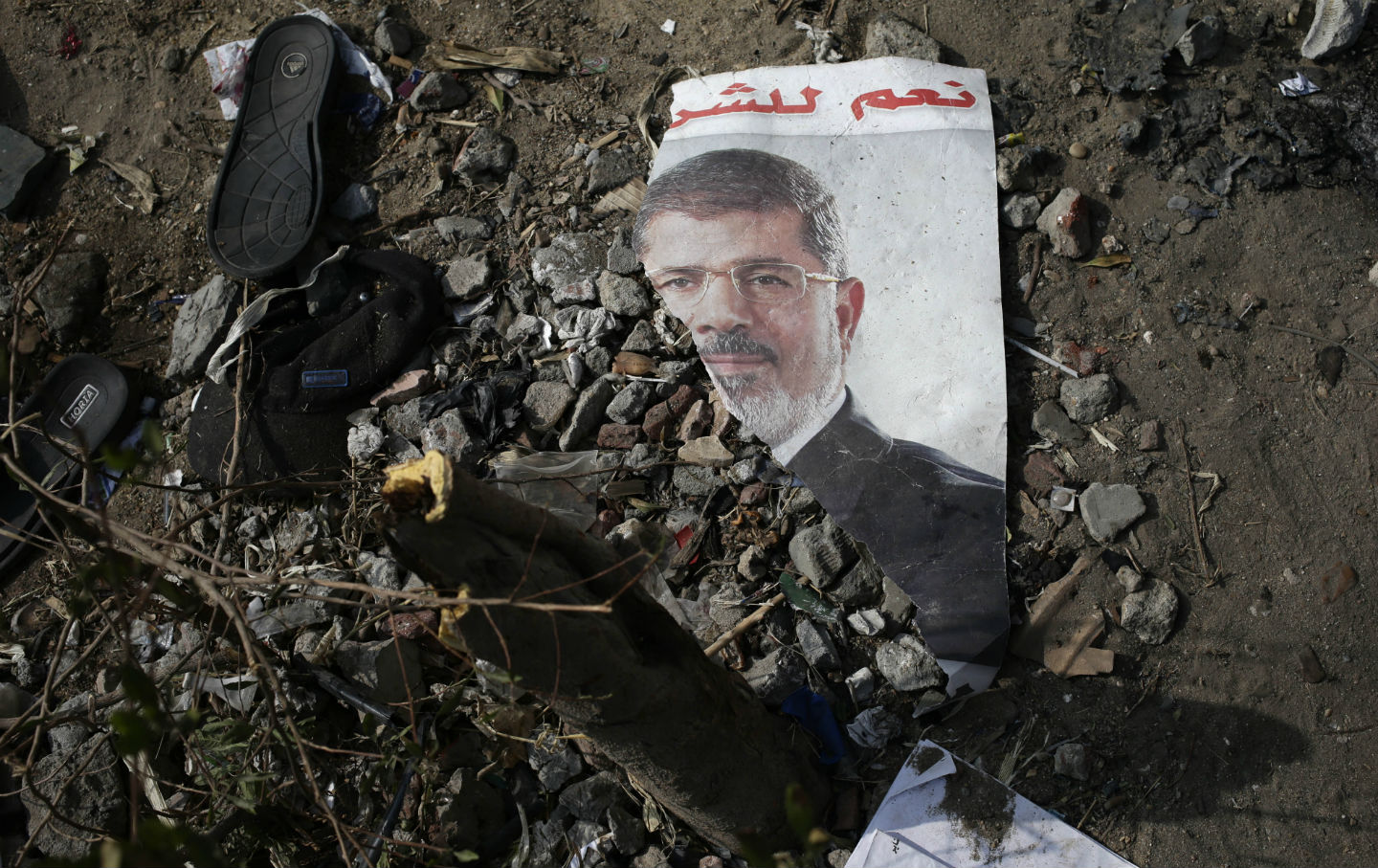 A trampled poster of Egypt’s ousted President Mohammed Morsi is seen on the ground outside the Rabaah al-Adawiya mosque. (AP Photo/Hassan Ammar)

The Egyptian court that sentenced former Egyptian president Mohamed Morsi to death this week may have done more than commit a human-rights violation. It may have condemned Egypt to years of violence and more decades of economic stagnation. Support for the Muslim Brotherhood, which Morsi led, probably has fallen to about a fifth of Egyptians, but that is a very large minority to nurse a grudge against the system. Bombings and violence have returned to Egypt’s Luxor tourist destination, which last witnessed a major attack in 1997. The US government appears now to have made its peace with Egypt’s military junta, satisfied that the holding of phony presidential “elections” in 2014, won by a general, has removed the stigma of the 2013 coup. Arms and aid shipments are back to normal, and the rise of ISIL has made the military regime useful to the West.

Morsi squeaked to victory in the June 2012 presidential elections against Ahmed Shafik, a former Air Force general and deposed dictator Hosni Mubarak’s last prime minister. Egyptians, who had demonstrated in the millions against dictatorship and lack of jobs or affordable staples in 2011 at Tahrir Square and elsewhere in the country, faced an unpalatable choice in their first free and fair presidential poll. It was conducted on the French model, with some 14 candidates in a first round in May (I was in Egypt then, and the hope was palpable) and then a run-off between the two top vote-getters. Most Egyptians were deeply disappointed at this Hobson’s choice between the religious right wing and a man of the old regime. In effect, they’ve never since had any other choice.

The Egyptian Revolution of 2011 broke out on January 25. Three days later, Mubarak’s secret police arrested Morsi and 23 other Muslim Brotherhood leaders, even though the Brotherhood leadership had been cautious about participating in the protests and formed a minority of the demonstrators. Two weeks later, in the chaos of the revolution, the Brotherhood figures made a daring jail break. Regime officials charged at the time that they were aided in escaping by Gaza-based Hamas and by Lebanon-based Shiite Hezbollah guerrillas, which seems a little unlikely, to say the least. Further, it was alleged that they passed the plans of the maximum-security prison to those groups, which the Egyptian government sees as terrorists, and so became guilty of material support of terrorism. It is typical of the Egyptian military to attempt to smear the Muslim Brotherhood, which foreswore violence in the 1970s, as being no more than a terrorist organization closely connected to actual terrorists like Al Qaeda. It was for the jailbreak and its circumstances that Morsi was sentenced to death this week, even though the current regime says it honors the January 25 revolution that Morsi’s questionable arrest had been intended, in part, to forestall.

Morsi’s year in power did not reflect well on him. He proposed banning unlicensed public demonstrations, a measure implemented by the current junta. He prosecuted young dissidents who criticized him for political libel, including the leader of the April 6 Youth organization, Ahmed Maher, now jailed by the military. He went after comedian Bassem Youssef. He is accused of having mobilized plainclothes Brotherhood thugs against demonstrators. He pushed through a fundamentalist-tinged constitution in the face of protests by women, Coptic Christians, youth activists, and liberals. He tried to pack the courts with Brotherhood members, tried to impose fundamentalists (some with a violent past) as provincial governors, and tried to create, unconstitutionally and by fiat, a national legislature dominated by the Brotherhood. In short, he conducted what looked to most Egyptians like a slow-motion coup. His economic policies were a disaster. Egypt exploded in anger against him in June of 2013, with millions in the streets and the biggest demonstrations, up and down the Nile, that the country had ever seen. Some of the youth leaders of this protest movement had links with the officer corps, but it is impossible to explain such massive demonstrations by factory workers, urban quarters, towns, and villages as a mere paid-for conspiracy.

After the military coup of July 3, 2013, junta leader and Morsi’s minister of defense, Gen. Abdel Fattah al-Sisi went to the public and asked permission to wage a “war on terror.” The big demonstrations in favor of this step encouraged him to crack down hard on Muslim Brotherhood demonstrators, killing hundreds in August and more that fall. Al-Sisi could have branded the Morsi faction within the Brotherhood a rogue, dictatorial one, and attempted to reach out to and rehabilitate the moderate and youth factions of the movement. Indeed, there was talk of this approach in August of 2013. Instead, al-Sisi decided to brand the whole movement a terrorist organization. It would be as though evangelical supporters of the religious right in the United States, about 20 percent of the electorate, were abruptly categorized as terrorists at the insistence of the Pentagon. An Egyptian opinion poll done earlier this year found that while two-thirds of Egyptians believe that religious extremism is a problem for the country, a fourth deny that there even is any religious extremism in Egypt. Likely this section of the public includes supporters and sympathizers with the Brotherhood, who are resisting the government line.

Al-Sisi’s policy is a self-fulfilling prophecy. Clearly, for a legitimate political party that came to power at free and fair polls to be abruptly stigmatized and banned will create a backlash. Most Muslim Brotherhood members and supporters have been incredibly patient and disciplined in retaining a faith in peaceful change. But, regrettably, some militants on the fringes of the movement have been radicalized. In the back pages of Egypt’s local newspapers, not a day goes by without an article on pipe bombs going off or police shot dead in provincial towns. There have been some bigger attacks as well, including the bombing of the police HQ in Mansoura in December 2013 and the January 2014 bombing of the secret police headquarters in Cairo, which damaged the adjacent Museum of Islamic Art and some of its holdings. Last week, three bombers attempted to blow up the ancient pharaonic Temple of Karnak in Luxor, with one setting off his suicide vest, causing the renowned Thomas Cook and Thomson travel agency to cancel tourist trips to that city. In the pre-revolutionary days, tourism provided about 10 percent of Egypt’s income.

Egypt and the Arab world in general suffers from remarkably low rates of direct foreign investment (DFI), which are unlikely to be helped by the social turmoil of a generational “war on terror” intended to crush the political party that significant numbers of Egyptians think represents them. Al-Sisi is hoping to replace tourist income and Western investment with hundreds of billions of dollars from the oil monarchies of the Gulf, but this approach seems more like a forlorn hope than a concrete plan. Without economic growth, Egypt cannot hope to provide jobs to its restless youth, who constitute a huge demographic bulge. Secular youth activism is also in the sights of the military, which has had the dreaded Ministry of Interior round up and cause to disappear 163 youth leaders just since April.

The Brotherhood was founded in 1928, and many Egyptian governments have attempted to destroy it without success. A minority constituency exists in Egypt for a political religious right wing, and forbidding it from participating in parliamentary politics is a recipe for social discontent. Morsi, with a ruling style that was arrogant and uninterested in compromise, himself bears some blame for creating fears among a wide spectrum of Egyptians that he was taking their country in the direction of an Iran-style theocracy. He paid a heavy price for his inability to hold on to the loyalty of the vast majority of Egyptians (the Brotherhood’s favorability ratings were down to 19 percent in June of 2013, according to Gallup). But that he did anything warranting a death sentence is at the least unproven in an unbiased court of law. Turning him into a Muslim Brotherhood martyr is guaranteed to roil Egypt for decades to come.

The Egyptian press gleefully pointed out that social media seemed completely uninterested in the death sentence, except in Turkey, which has a long history of civil society and religious right struggle against military dictatorship. Despite the 2013 coup, which should have required the United States by law to cease military aid to Egypt, Congress has accepted the fiction of a return to democracy (even though al-Sisi strong-armed most rivals into not running against him and dominated the media, winning by 97 percent, a sure sign of fraud). The rise of ISIL in Syria and Iraq has made al-Sisi’s insistence that Islam be private religious practice and not mix into politics appealing not only in the West but in regional countries like the United Arab Emirates. In fact, Egypt has proffered almost no help in rolling back ISIL except in the Sinai peninsula, where marginalized tribespeople have long turned to forms of radical Islam as ideological support in their struggle against the authoritarian Egyptian state.

Not only Egypt is at stake. Powerful movements of moderate political Islam participate in civil politics in Morocco, Tunisia, Turkey, Pakistan, Indonesia, and elsewhere in the Muslim world. That choice should be reinforced, as long as they agree to play by the rules of democracy (continued aboveboard elections, respecting minority rights, a rule of law, and the losers go home). Al-Sisi has vindicated Al Qaeda leader Ayman al-Zawahiri, who denounced Morsi in 2012 for participating in civil politics, warning that it was a trap for devotees of political Islam. Likewise, ISIL castigates elections as un-Islamic and voting as a grounds for excommunication and even execution. In demonstrating that the wages of moderate parliamentarianism on the part of Muslim religious parties is death, al-Sisi is not helping stand against radicalism—he is fomenting it.