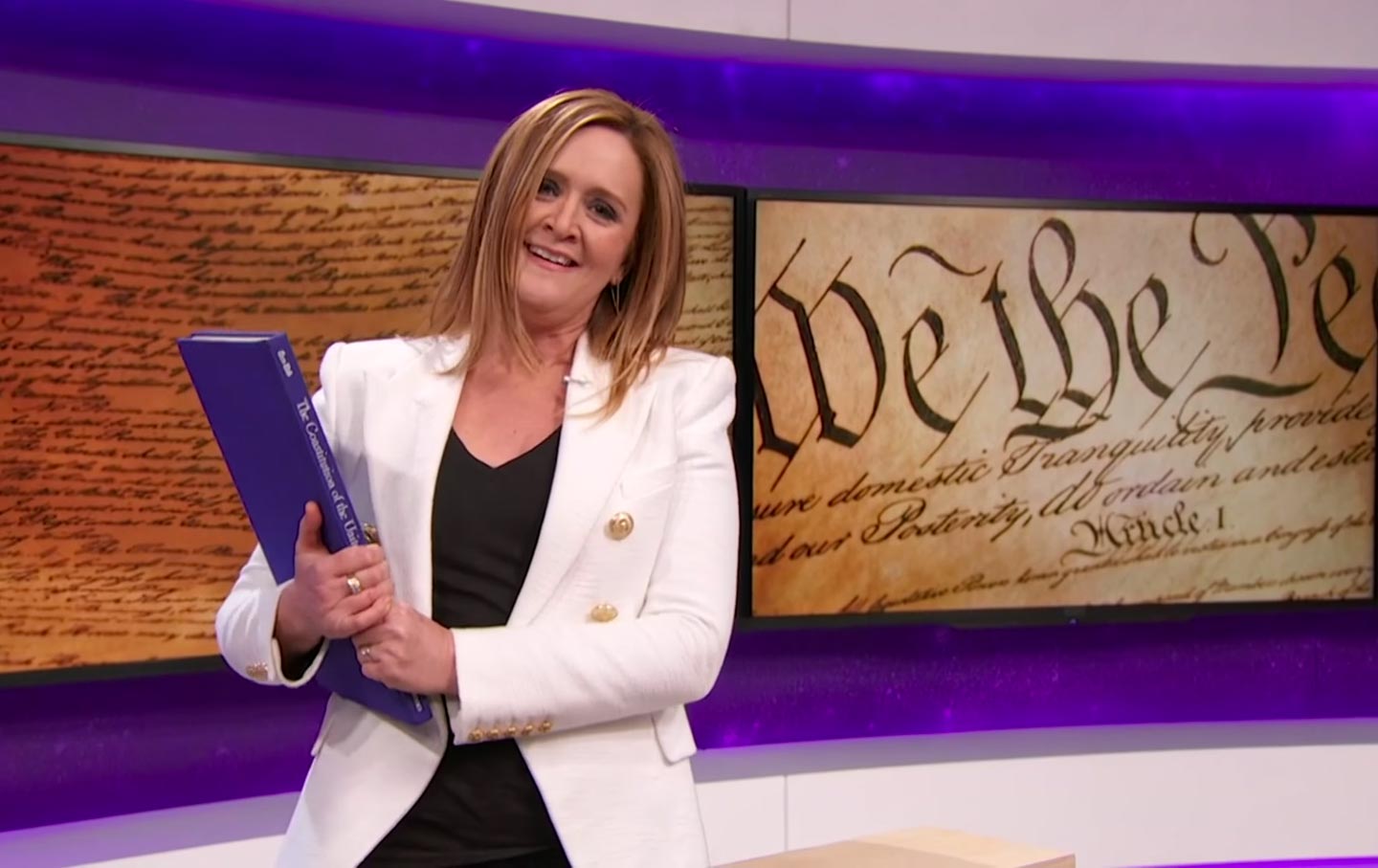 One ridicules the other mercilessly, but Samantha Bee and Hillary Clinton are nevertheless sisters-in-arms: each a strong, ratings-dependent feminist trying to break into an all-boys’ club, late-night comedy and the presidency, respectively. But only one of them is firing with all guns blazing.

In last week’s debut of Full Frontal, Bee’s Monday-night show on TBS, she held a press conference where reporters obsessed over her gender. “How can I watch your show—as a man?” asks one guy. “What’s it like to be a female woman?” wonders another. “What did you have to do differently to make this show a reality—as a woman?” Bee says that busting the late-night guy barrier took “hard work, a great team, maybe a little bit of magic.” And with a twinkle in her eye, she transforms into a screeching, exorcist-baiting Linda Blair in total demon-seizure. Flipping back to normal, Bee tells the stunned reporters, “It’s true, we’re all witches.”

And accordingly, Samantha’s been spewing curses at her big-sister witch—accusing Hillary of “top-shelf pandering” to blacks and feigning surprise at finding herself running for POTUS. An exasperated Sam cries, “Oh, fuck off! ‘What, me, president? Oh, golly gumdrops!’” Then she has Hillary demanding worship in a stentorian, horror-movie voice: “Anoint me your god! What more do you people want from me?!” It’s harsh and hilarious and raises a couple of questions for a show with the tagline, “Watch or you’re sexist.”

At 46, Bee is right on the cusp of the feminist generational divide that is plaguing Clinton’s campaign, especially after the Steinem/Albright New Hampshire meltdown. But as tough as she is on Hillary, Bee’s no Bernie Bro either (she hits Sanders for sporting sloppy clothes and too-neat remedies, telling him, “Money doesn’t fix racism, Bernie”).

And in her own, extremely backhanded way, Bee has been giving Clinton some you-go-girl advice. On Full Frontal’s second episode, Sam said Hill can avoid the sexist traps awaiting her whenever she opens her mouth by writing reminders in Sharpie on her wrists: “SHRILL=BAD” and “DON’T BE C*NTY” (asterisk hers).

Bee’s feminism doesn’t always express itself by going as all-out un-PC as an adolescent boy. At the end of this week’s episode, she said she had to bump a segment on women in the workplace because of the death of Antonin Scalia, adding that the Supreme Court justice “died as he lived—interfering with a woman’s plans.”

The bit she did on Scalia was terrific and much-needed: Bee stung (sorry) the corporate media for letting the GOP frame Scalia’s death as a “constitutional crisis.” As video from a CNN anchor blurts, “Chaos! Confusion!” the stage flashes with frantic “CODE 4-4” warnings, sirens scream, and the camera zooms in and out of Bee’s hysterical face. “All hands on deck! Oh my God! What happens now?!” she yells. “Somebody, somebody bring me the manual!”

“It’s fine,” she says calmly as the chaos suddenly stops. “According to Article 2, the president just appoints a new one.” Then she cuts to the chase: “What better way to honor America’s greatest champion of original intent than by wiping your obstructionist ass on the document he holds so dear?”

Bee was never one of my favorite comedians on The Daily Show. Her mugging and delivery too often struck the same overacted one-note.

She still does that stuff on her show, but she’s becoming something more. With the amplitude of 22 minutes and by emerging from Jon Stewart’s shadow, Bee is more full and frontal. It’s just her, alone, standing on a barren TV set that doesn’t even try to look like a fake news show—it has no desk, spinning graphics, or fellow correspondents. And, in something not seen on Stewart, Colbert (1.0 or 2.0), Noah, Wilmore, or Oliver, Full Frontal is all politics, no pit stops for celebrity interviews or pop-culture curios.

That may all change one day. But for now, it’s just Bee, backed up by video, a throbbing theme song, Peaches’s “Boys Wanna Be Her,” and a bunch of writers—chosen, by the way, in a blind submission process, reportedly resulting in a writing staff that’s half female and more ethnically diverse than most joke teams this side of The Nightly Show.

The last segment of the show gets away from the one-woman stand-up and ventures into the wider world. Last week, it was a funny-sad, Werner Herzog–like short film on the desolation of Jeb Bush. Bee is now in the middle of a two-part field report on a Syrian refugee camp in Jordan. She goes there to find out “who are these refugees, and why do they hate America so much that they’re willing to be bombed into homelessness just to freak us out?”

You get the idea: She discovers that they not only don’t hate us, but that they’re reasonable human beings and have a sense of humor! Well, at least they laugh at Bee’s jokes.

Inevitably, Full Frontal will be caught up in the feminist angst Hillary’s campaign has unleashed. The question is, can Bee get a little more nuanced than doing witches and harpies?

How, for instance, will she handle Hillary’s “bark”? For the uninitiated, Clinton was recently talking about everyday Republican lies, and she recalled an old radio ad popular in Arkansas, in which a dog barked every time a pol said something that wasn’t true. Clinton:

I’m trying to figure out how we can do that with Republicans. You know, we need to find that dog and follow them around, and every time they say things like, “Oh, the Great Recession was caused by too much regulation”—art, arf, arf, arf! You know, we could cut right through a lot of their claims.

Clinton told the joke well, she was relaxed, she was funny—she was, in fact, everything that everyone who complains about her cautiousness says she should be. Predictably enough, though, social media stripped the arf! from its context and circulated memes that, in the right right-wing hands, made her look crazy. And we all know what a female dog is. There were tweets like “She Looks Like Dog/Barks Like a Dog, Must be a BIT**.” Coverage of the bark, the millennial feminist site Bustle wrote, opened “up a sinkhole of sexism.”

Come Monday, will Bee join the pile-on? After all, it’s just the sort of personality-based fodder that late-night comedy thrives on. (Larry Wilmore tweeted, “Why am I not on air the day Hillary Clinton barks like a dog?”)

Of course, Bee could just ignore it. Or maybe she’ll see that Hillary was doing something quite Bee-ish: telling a joke and daring to cross a line of acceptable girl behavior.

Maybe Bee will even bark with Clinton. Only louder.