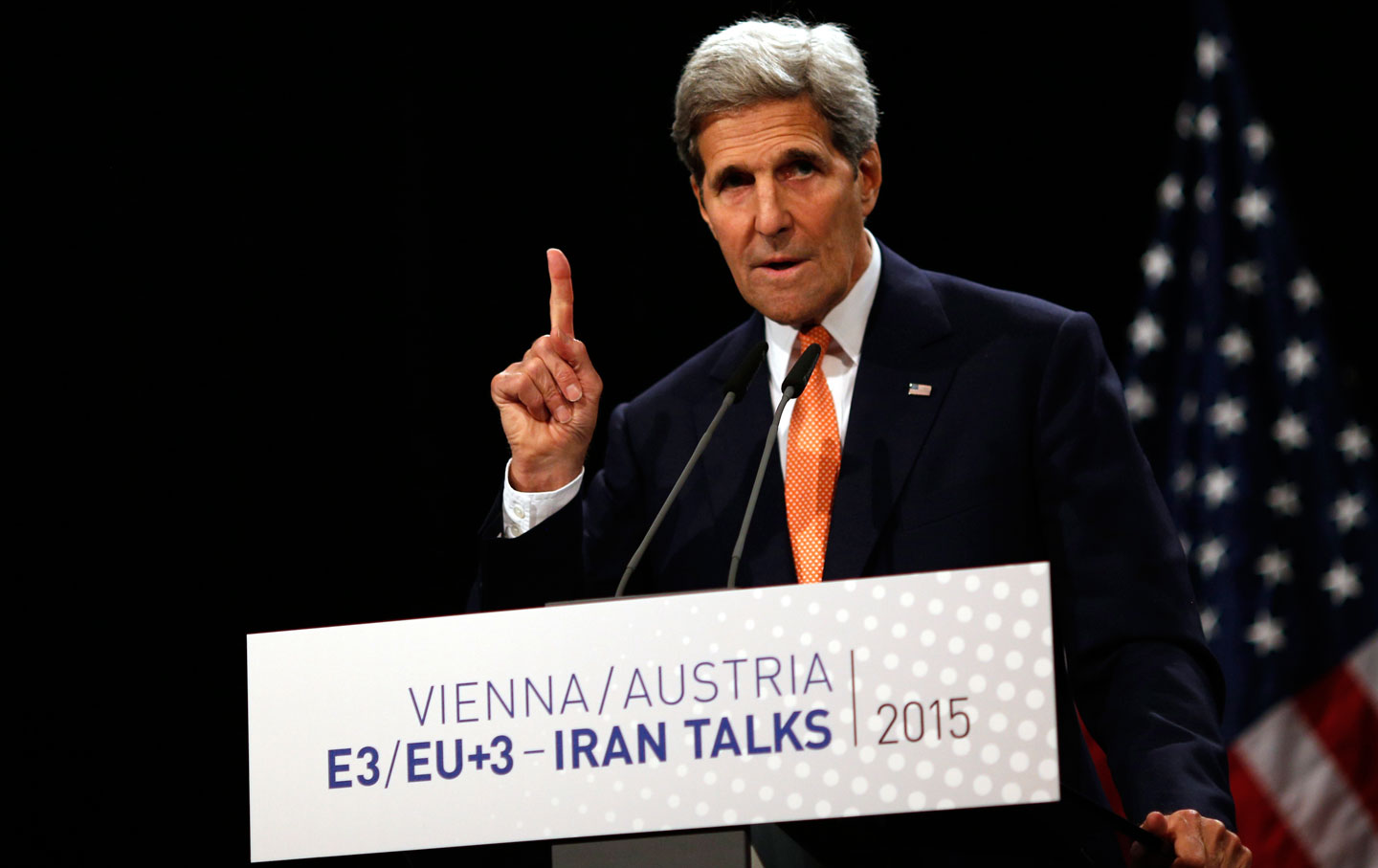 US Secretary of State John Kerry delivers a statement on the Iran talks deal at the Vienna International Center. (AP Photo/Carlos Barria)

Just two years ago, Mahmoud Ahmadinejad was still the president of Iran. His crude manner and belligerent obstinacy inspired threats from the West—from Congress and from its allies in Israel’s right-wing government. A few years before, a massive Atlantic cover story had declared a 50-50 chance of war. It seemed all but assured that the probability of such a confrontation, universally regarded as a disastrous proposition by anyone who didn’t have an ideological commitment to it, could only increase. Those were dark days.

Twenty-five months ago, Iranians went to the polls and elected a mullah—from among the much demonized Iranian mullahs—as president. The man at the pinnacle of power in Iran, the Supreme Leader Ali Khamenei, would remain firmly in place, but Hassan Rouhani’s win signaled flexibility nonetheless. The bellicose Israeli Prime Minister Benjamin Netanyahu took to the American airwaves to deride Rouhani’s “smile.” The remark was not without irony: Ahmadinejad smiled a lot himself, but his grins were those of a mischievous child, the needling of authority that came after a misdeed. That Netanyahu didn’t recognize the smiling precedent and the distinction with a difference that Rouhani represented spoke ill of his interpretation of events. Both smiled, but the new Iranian president was clearly of another breed.

By August 2013, Rouhani was in power; by September, he was on the phone with Barack Obama, the first such contact between the heads of Iran and the US since Jimmy Carter rang up the last Shah; in November, an interim deal was signed between Iran and world powers. These small rays of light shone through the ominous clouds that had hung over the Iranian nuclear crisis for a dozen years.

This morning, daybreak came before dawn on the East Coast. Negotiators from the so-called P5+1—the US, China, France, Russia and the United Kingdom along with Germany—and Iran announced a historic comprehensive nuclear deal. The 20 months of negotiations were a long haul: There were extensions, blown deadlines, and attempts to scuttle the deal by Congress and Iran’s hardliners. But the talks finally culminated in a marathon session of 27 days in Vienna, blowing through another few deadlines and finally ending with this morning’s announcement.

The accord places long-term curbs on Iran’s nuclear progress, even rolling back its past progress in key areas like enrichment capabilities and fissile material stockpiles, and imposes the most stringent negotiated inspections regime in the history of the world. The life of the restrictions and intensified inspections vary according to the specifics—the toughest limitations will be in force for at least 10 years, some for 15; some of the new verification measures will hold for 25 years and a few are permanent. In exchange, the Iranians get relief from the sanctions that have bitten its economy.

“Today, after two years of negotiations, the United States, together with our international partners, has achieved something that decades of animosity has not—a comprehensive, long-term deal with Iran that will prevent it from obtaining a nuclear weapon,” Obama said in early morning remarks welcoming the deal. He harkened back to what things were like before the talks got under serious way, making the stakes clear: “Put simply, no deal means a greater chance of more war in the Middle East.”

For the moment, that fate has been averted; perhaps that’s what has the deal’s main stateside opponents—neoconservatives, Israel lobby groups and much of the congressional GOP—positively apoplectic. Senator Lindsey Graham (R-SC) had the hottest of hot takes this morning, telling Bloomberg View that the accord was “akin to declaring war on Sunni Arabs and Israel by the P5+1.” That’s right: Graham is saying the aversion of war is actually the five permanent members of the UN Security Council (plus Germany, for good measure) bombing Israel. The catch: Graham told CNN later in the morning that he hadn’t read the deal, whose core runs only 20 pages, with scores more of annexes.

Those sorts of evaluations should merit nothing but eye-rolls, but sadly one cannot ignore the halls of American power entirely, despite their proclivity to ignorance. The deal will, after all, need to pass through a congressional review. According to a procedure passed by Congress and reluctantly accepted by the administration, the people’s representatives have 60 days to review the accord. If they disapprove of a deal, they must pass a resolution saying so in order to block its implementation (the US sanctions relief is achieved by Obama’s waiving the laws that impose them, which Congress could block). In his remarks, Obama vowed to reject any measure that attempted to do so. Such a veto would then need the support of only one-third-plus-one of either chamber to be sustained. Despite Graham’s prediction of congressional rejection, Obama seems likely to be able to marshal enough support from his party to keep the deal on track.

The agreement’s opponents may be shocking in their shamelessness, but not their substance. The objections are entirely predictable, with neoconservative pundits and Israel lobby groups like AIPAC forecasting them for months as the contours of the agreement became apparent in media reports. The deal won’t last long enough, they say, though by that they mean Iran won’t accept draconian permanent curbs, something no nation would do. Iran’s behavior hasn’t changed, they stammer, citing the Islamic Republic’s foreign-policy alliances with dictators like Bashar Assad, rebel groups like Yemen’s Houthis, and the unpalatable anti-Israel militants of Hamas and Hezbollah. That much is true, but the negotiations were strictly about the nuclear issue—which, by the way, the same hawks in Washington and Tel Aviv have been grousing about for years as the gravest threat to mankind since the White Walkers.

Now there is a deal that without question reduces that grave threat, at least for a long-term period. The deal includes provisions to “snap-back” sanctions if Iran violates its terms, ingeniously designed to prevent the malcontents among the veto-wielding UN powers—Russia and China—from blocking their reimposition on spurious grounds. The deal, crucially, has international buy-in because of the participation of the world powers. Netanyahu and his congressional allies may complain endlessly, but they are swimming against the overwhelming international tide.

That said, the central players of this drama were always the United States and the Islamic Republic of Iran. They will continue to be so, by virtue of the history of enmity between the nations, which will not evaporate overnight. The United States will continue to criticize and counter Iran, both in its near abroad—the Middle East, our sometime playground—and at home, where the human-rights violations of the regime are sure to continue, if not initially get worse. And yet there is hope: nothing is certain, but many proponents of the deal, including stern critics of Iran’s malfeasance over the years, hope that the lifting of the clouds of war and Iran’s economic opening will lead to political and civil rights reforms.

“The fight after a nuclear deal is really going to be about the future of Iran, not about the deal itself,” Vali Nasr, the dean of the Johns Hopkins School of Advanced International Studies and a former Obama administration official, told me late last week. “Most of the people who are supporting the deal, myself included, they’re supporting it not because of the narrow details of, y’know, 1,500 centrifuges for so many sanctions. They’re supporting it in the belief that it will do something much bigger in terms of socio-political change.”

The reactionaries of Iran’s hard-line institutions are likely to resist those changes. Their grip may hold for a time, even for the long term. But this much is clear: the path of isolation and punishment—the path, that is, toward confrontation we were all set on before these nuclear talks started—wasn’t yielding any fruits. Iran achieved milestone after milestone in its nuclear program. It meddled in its neighbors affairs. And it violated its own people’s human rights. That path held no prospects for reform—think Cuba—but now there is an opportunity, a reason for hope. The critics of this deal offer no alternative to it; theirs is a vision bereft of anything near the accomplishments of the agreement and the possibilities it proffers. Obama is right: The status quo of two years ago meant a path to war. This deal was itself the alternative, but not the one which Washington’s hawks wanted to see.

If, after more than three decades of the most vitriolic hostility, Iran and the United States can sit at the negotiating table and hammer out a deal that gives the world security from a potentially nuclear-armed Iran and presents economic opportunities for the Iranian people, then no one can deny the possibility of further movement between these two nations. Critics will holler that Obama “caved,” but that is just a code word for “compromised.” A willingness to bend without breaking was always necessary for a deal; the perfect has been the enemy of the good throughout the talks.

The forces of reaction, in the United States, in Iran, in Israel, and in the Sunni Arab states, will be furiously advocating for retrenchment. But there’s is a perspective cast into doubt by what has already been achieved so far. A new day has come.