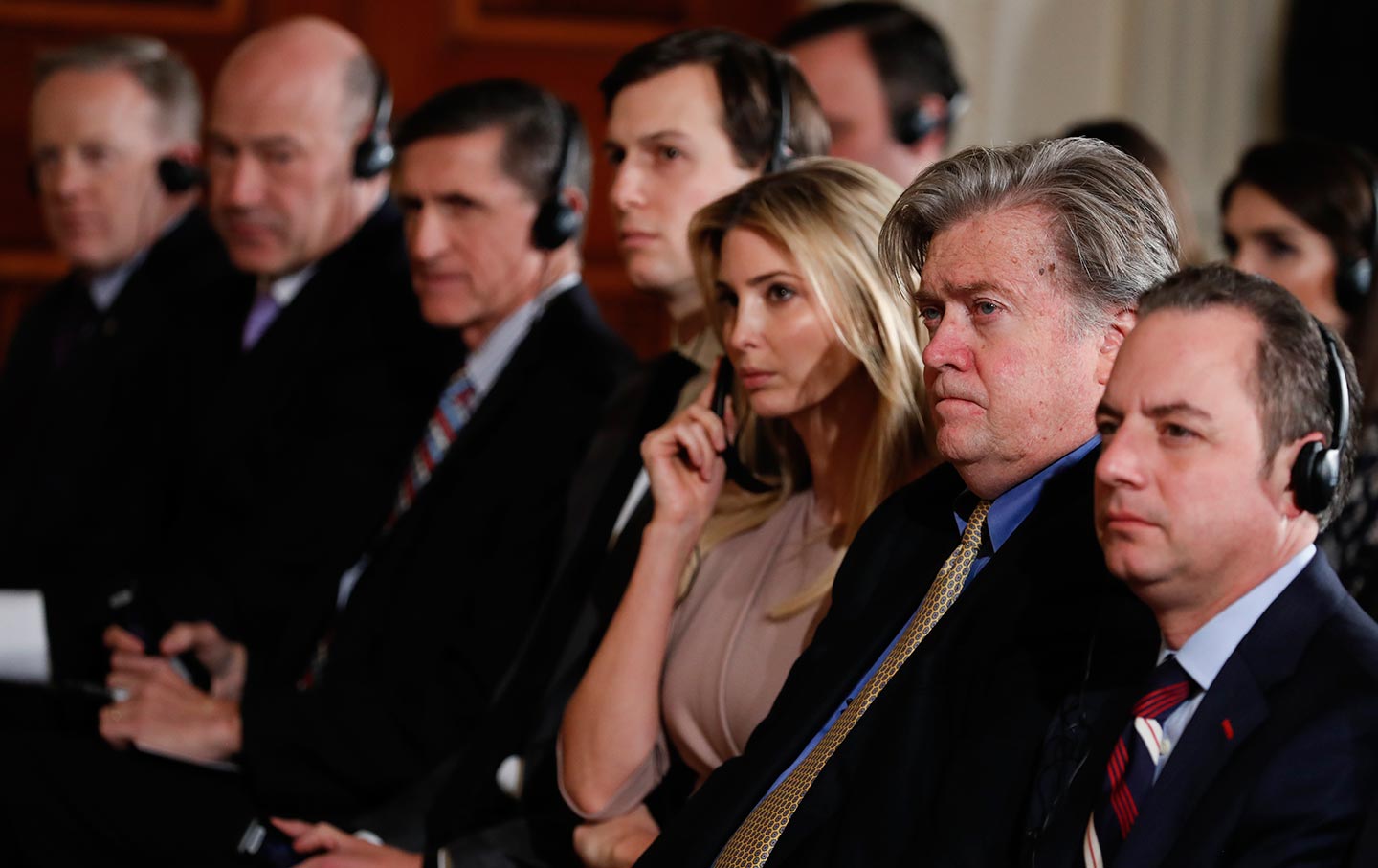 From right, Reince Priebus, Steve Bannon, Ivanka Trump and others look on during a press conference at the White House on February 10, 2017. (AP Photo / Carolyn Kaster)

How do we make sense of the apparent chaos in the Trump White House, with the president saying something one day and his top officials insisting otherwise the very next? There is, of course, the unstable personality of the president himself, and the fact that he has yet to install a complete cadre of senior policy-makers. But I believe there’s a deeper, more structural explanation for the chaos. Swirling around Trump and fighting  for supremacy are two powerful factions: the billionaires, who seek maximum opportunity for elite enrichment, and the bombardiers—political ideologues who seek to bring down the existing world order and establish a new one in their preferred image. So long as these two competing factions continue to enjoy Trump’s patronage, we can expect continuing reversals in the weeks and months to come.

That Trump has a predilection for the super-rich in his inner circle is hardly a secret. Even though he denounced the oppressive power of Wall Street during the campaign, he has chosen many of its leading figures to serve by his side. Among the billionaires and multimillionaires in his cabinet are Betsy DeVos (estimated family net worth: $5.6 billion) as education secretary, Wilbur Ross ($2.5 billion) as commerce secretary, Steve Mnuchin ($500 million) as Treasury secretary, and Rex Tillerson ($325 million) as secretary of state. Trump has also scoured the executive ranks of the banking giant Goldman Sachs for many of his senior advisers, including Gary Cohn as his top economic adviser and Dina Powell as a special adviser on economic initiatives.

To say that these representatives of the super-rich espouse a unified agenda would be simplistic. Nevertheless, they share many common interests and can be expected to cooperate in pursuing major objectives, such as corporate tax cuts, the elimination of restrictions on fossil-fuel extraction, the privatization of education, and a rollback of the 2010 Dodd-Frank Act overhauling financial regulations. While perhaps more focused on domestic economic profiteering than other members of the billionaire class, they are all beneficiaries of a world capitalist system that has flourished in an era of globalization and free trade.

The bombardiers may share some illiberal values with the billionaire class, but they have a fundamentally different worldview. For them, economic enrichment is less important than prevailing in what they view as an epic struggle between the “Judeo-Christian West” and the non-Western (especially Islamic) world—a “clash of civilizations,” as the late political scientist Samuel Huntington put it. This group includes senior White House strategist Steve Bannon, senior policy adviser Stephen Miller, and immigration and security adviser Sebastian Gorka.

For the bombardiers, capitalism has been corrupted by global elites who put multinationalism and free trade above national sovereignty and the struggle against Islam. As they see it, the world order is an impediment to the West’s victory in this struggle, and so it must be demolished. In its place, a new world order—led by an alliance of ultranationalistic, predominantly white and Christian nations, including the United States, Britain, and Russia—will dominate the planet.

There can be no true accommodation between the billionaires and bombardiers in Trump’s inner circle. The populists’ fight, Bannon declared in 2014, is “with the Republican establishment, which is really a collection of crony capitalists that feel that they have a different set of rules of how they’re going to comport themselves and how they’re going to run things.” Those crony capitalists, he insisted, “want to have more and more monopolistic power, and they’re doing that kind of convergence with big government.” Only when they’re driven from power can the true spirit of entrepreneurial capitalism be set free and the Judeo-Christian West rescued.

But the billionaires that Trump has picked for top cabinet positions are determined to perpetuate the power of what Bannon would call crony capitalism—­the use of big government to advance the interests of monopoly capital. Steve Mnuchin has made no secret of his wish to roll back parts of Dodd-Frank to make it easier for the giant banks to engage in speculative trading. The White House has also promised to eviscerate the restrictions on oil and gas extraction—a goal long sought by Rex Tillerson while he was CEO of ExxonMobil. All of the billionaires, of course, stand to benefit from tax cuts and other corporate-friendly moves favored by Trump.

The billionaires also have a fundamental stake in the survival of the US-dominated world order. All made their fortunes and continue to prosper in a nexus of economic and trade arrangements that have allowed US-style capitalism to flourish. As a result, they are unlikely to favor policies that would introduce major shocks to that system, such as the dissolution of NATO, the European Union, or the World Trade Organization. This explains, I think, the efforts being made by Vice President Mike Pence  and Defense Secretary Jim Mattis to reassure America’s allies of Washington’s continuing commitment to its international obligations. Presumably, Gen. H.R.  McMaster, Trump’s choice to replace Michael Flynn as national-security adviser, will continue in this vein.

But the bombardiers are just as determined to pursue their own agenda, and they appear to wield as much power in the White House as the billionaires. Trump’s continuing obsession with building a wall on the US-Mexican border and keeping out unwanted Muslim migrants is evident of their influence, as is the demagogic bent of his populist-patriotic messaging.

It follows from all this that we can anticipate continuing turmoil in the White House as the billionaires and the bombardiers fight for control over pol­icy and key appointments. The Donald himself, with leanings in both directions, is likely to play one side against the other as it suits him, always craving affirmation and adulation. But the “ship of state,” as it’s sometimes called, will lurch this way and that until one faction or another gains control of the wheel or the ship careens into a major crisis and prompts outside forces to step in and eliminate the entire crew, Trump and all.