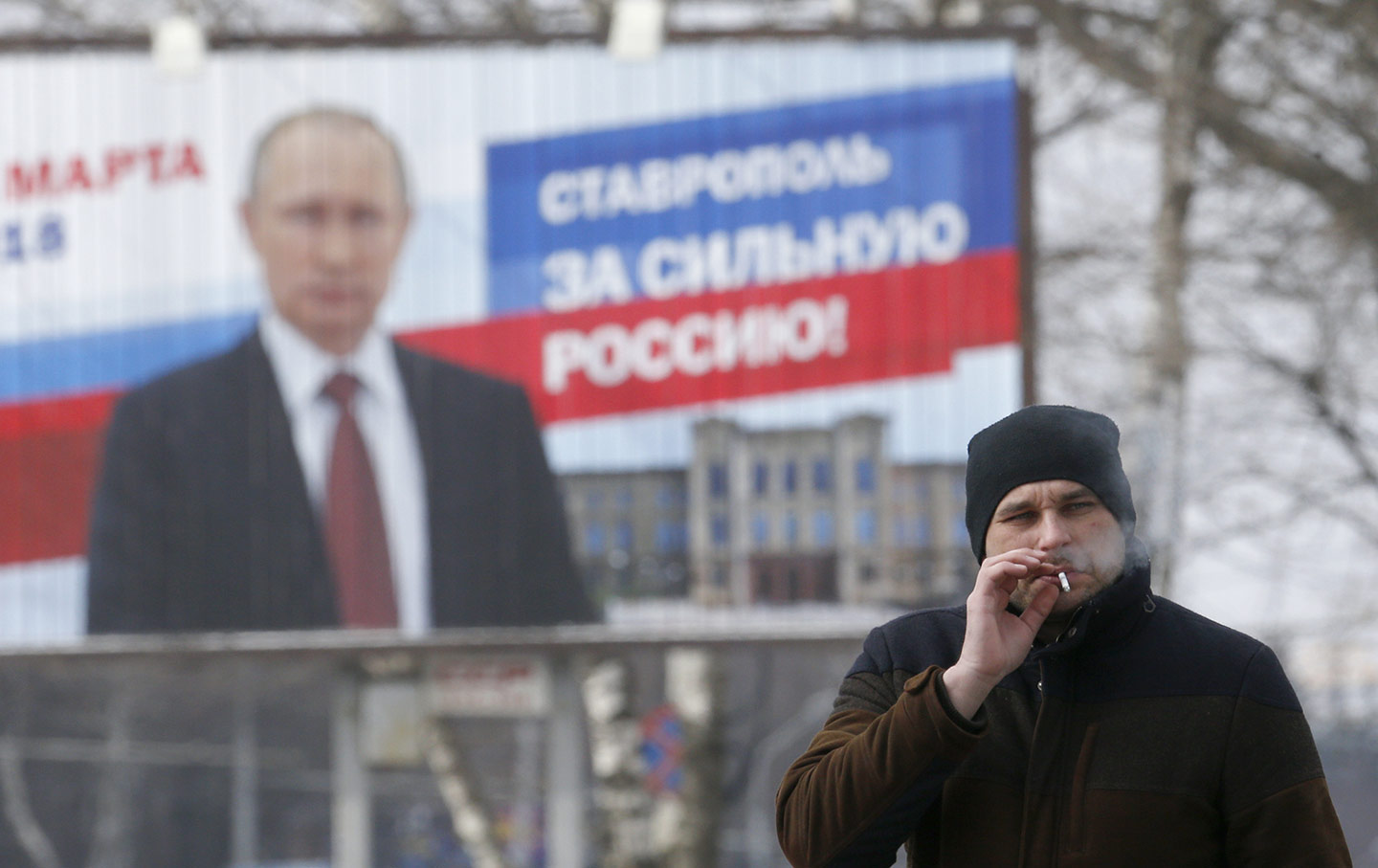 A man smokes while walking near a billboard that advertises the campaign of Russian President Vladimir Putin in Stavropol, Russia, on March 5, 2018. (Reuters / Eduard Korniyenko)

Televised debates by presidential candidates in the regions are a required part of the campaign. Viewers consider this practice to be totally pro forma. Being a participant in the debates as an official representative of Grigory Yavlinsky, I can’t disagree. The very format of the regional program—26 minutes for eight debaters—presupposes extremely brief answers to the moderator’s questions (social sphere, regional politics, arms race, and so on), precluding any discussion among the guests. And certainly the format allows no serious discussion of concepts or programs. Even on the federal level, the debates did not turn into a serious discussion about the country’s future. What the audience remembered was the intense scene—in the opinion of old hands, too intense not to be planned—when Ksenia Sobchak doused Vladimir Zhirinovsky with her glass of water in response to his rude remarks. “In the battle of recognized masters of showbiz, youth and quick wit won,” was the comment of a young blogger. Political appearances are showbiz, which has been clear in Russia for a long time. No one bothers to read the political programs, since the results are clear to most people already.

Everyone is waiting impatiently for the campaign to end. Managers and heads of corporations, so they can get on with work put off until March 18; hired propagandists and activists of Putin’s’ “national front,” to get their honestly earned money; and everyone else, to stop having to watch the boring television series “we’re better than everyone else and Putin is the very best of us.”

Everyone is infinitely tired. The honest businessmen and heads of companies are tired: They may privately support an “alternative” candidate and may even vote for one, but they understand that going against the mainstream today means exposing one’s work and collective to a blow. The propagandists are tired. Their voices and faces are no longer passionate; they seem to be repeating the old clichés. Even the hastily assembled film Sleepers-2 on NTV (about agents of influence of the evil “West,” the liberal intelligentsia) was boring. Many members of the opposition and civil-rights activists are tired—yes, they did manage to free the historian Yuri Dmitriev and install a monument to the victims of Stalinist repression and a memorial plaque for Boris Nemtsov, but their voices are not heard, and the surviving dissidents are elderly. The independent publishers and journalists in the regions are tired; their courage and professionalism helped them survive the unequal battle with state giants, preserve their dignity, and even bring some investigations to court, exposing corruption and acquitting the innocent, but they could not change the situation in the mass-media market or withstand the almost total control of the state: At the last meeting with the president in Kaliningrad, they were not given a chance to speak. The president himself is tired, everyone has noticed that.

Most tired of all is the public. It is tired of being threatened—even the video of the new weapon of death in the presidential address that made everyone tremble was not an act of intimidation but a presentation of innovations. The average citizen learned little from the expert commentary, but understood that there won’t be war in the near future but there won’t be any improvement of life, either, since we have to pay for defense. We’ve all heard that before. In the early 1980s, our generation was promised communism, according to the Communist Party program. Instead, they started the Afghan war, where my peers died in the name of “international duty” and the number of dead was a top secret. It was Afghanistan that hastened the collapse of the USSR. People recall that anxiously when talking about the recent Russian dead in faraway Syria. Of course, the people fighting there are mercenaries, not drafted soldiers, for no information can be kept secret for long, and it is wrong to compare modern Russia with the late USSR. There is no apparatus of suppression controlling the country; there is no Communist Party; the borders are open; there is freedom of entrepreneurship;, albeit not quite transparent; and at least partial freedom of speech; and in general people feel very different now. But there is no real dialogue between the authorities and society or among various groups in society. Just as there was no dialogue in the regional debates among representatives of the candidates.

In 2015, the economist Natalia Zubarevich held a press conference to reveal the results of her research on the reaction to sanctions, the economic crisis, and the deteriorating financial situation. The great majority of her respondents recalled the old Soviet strategies for personal survival: rent your apartment in the city and live at the dacha, send your children to study abroad, go with your whole family to earn money abroad, or start up a semi-legal business. Only a few individuals expressed protest and a desire to consolidate with others to solve current problems. The few protesting against “crisis measures” in the economy—long-haul truck drivers and farmers—were doomed to failure despite their heroic efforts because of their small numbers and lack of wide support. Many of those who sympathize with them are in no hurry to express solidarity and solve their own affairs individually. By early 2018, 40 percent of Russians were working in the semi-shadow economy, totally unrelated to the state. Just as it had been in the final years of the USSR. This means that the contract between state and citizens made in the early 2000s, on the wave of the war against terrorism—we will protect you and you don’t interfere in the affairs of the state—no longer works. There is no trust. Thousands of educated and talented people all over Russia are figuring out how to make their lives work without looking to the state. Gifted young people do not plan to tie their fate to state service since they see how decisions are made without taking into account expert opinions or discussion with the public. There are several worlds within the country that do not intersect or communicate.

No one knows exactly what will happen after March 18, Election Day. But everyone realizes that the final stage of the long period of Russian development is beginning. Many hope that it will pass without social disruption. Yavlinsky’s program “Road to the Future” stresses public participation in the problems of local self-government and daily common life. Local self-government may become the point where citizens will be able to show what they can do and embark on the path to improvement and dialogue. The recent Moscow municipal elections demonstrated that possibility, to the surprise of many. Independent candidates and representatives of independent parties won 20 percent of the seats, and in the precinct where Putin votes, all the seats were won by Yavlinsky’s party Yabloko.

Mayoral and municipal government elections in many regions will follow the presidential elections. Russia’s new renaissance could begin not in the federal center but in the depths of the country, where at long last, deep grass roots will grow.