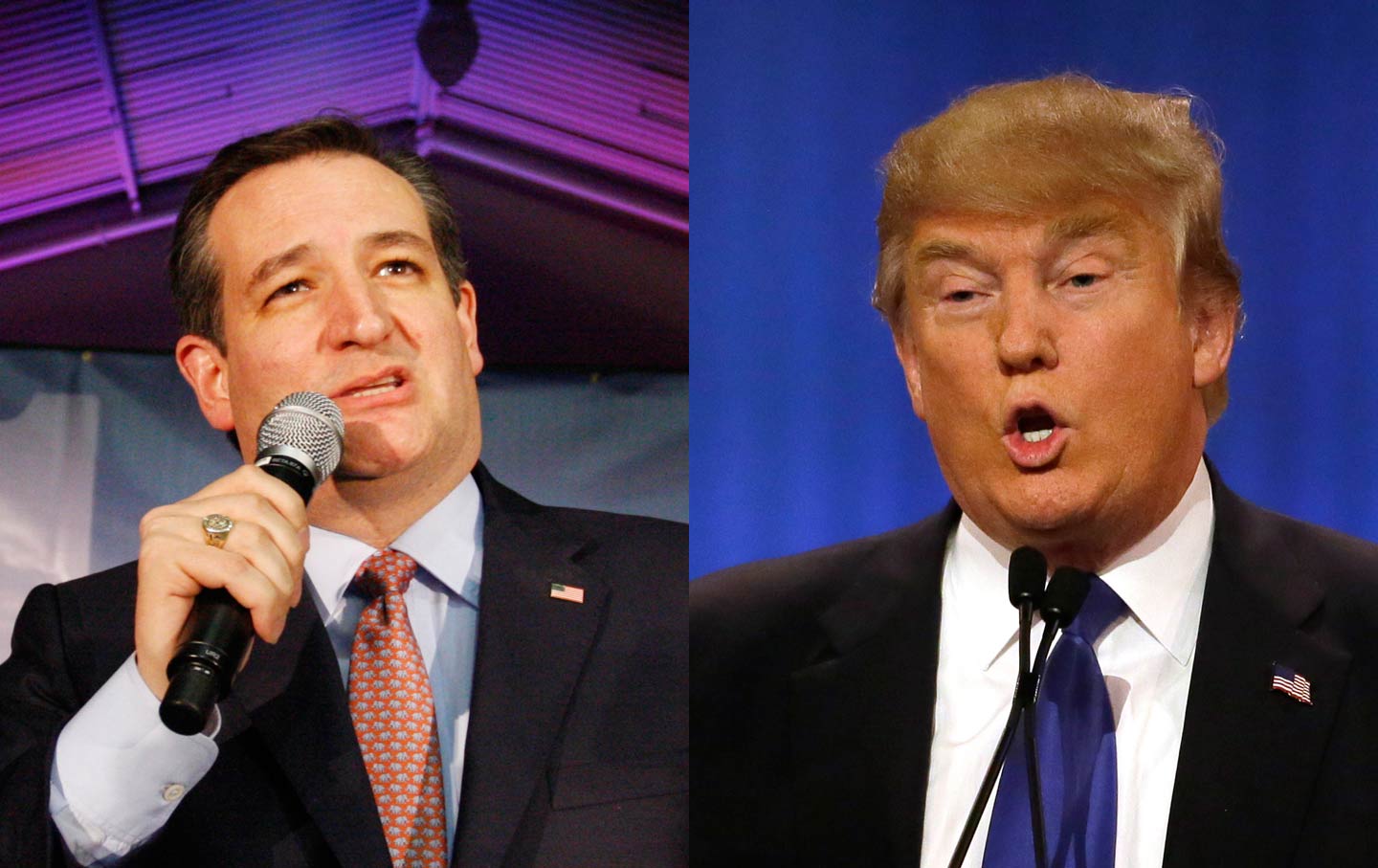 The horrific terror attacks in Brussels on Tuesday morning inspired expressions of sympathy, solidarity, and, from the two leading contenders for the Republican presidential nomination, painfully predictable scapegoating and torture talk.

Texas Senator Ted Cruz, the most steadily shameless of the contenders for the Republican nomination, moved immediately to his default positions: attacking President Obama and promoting himself. “Radical Islam is at war with us. For over seven years we have had a president who refuses to acknowledge this reality. And the truth is, we can never hope to defeat this evil so long as we refuse to even name it,” the senator announced, as details were still being reported from the sites of the attacks on the airport in Brussels and a metro station near the headquarters of the European Union. “That ends on January 20, 2017, when I am sworn in as president. We will name our enemy—radical Islamic terrorism. And we will defeat it.”

Cruz, who is emerging as the favorite of establishment Republicans in their efforts to prevent Donald Trump from securing their party’s nomination, had to repeat his talking points in a statement posted on Facebook. He them extended his extremism with a statement released by his campaign and his Senate office that declared: “We need to empower law enforcement to patrol and secure Muslim neighborhoods before they become radicalized.”

Those words confirmed that Cruz is every bit as reactionary and irresponsible as Trump. Indeed, Senator Barbara Boxer, D-California, felt it was necessary to remind the Texan that: “You are running for President of the United States — not some authoritarian police state.”

“I mean, you know, these attacks aren’t coming out of—they’re not done by Swedish people...” — Donald Trump

Of course, the front-runner for the Republican nod did not suffer the indignity of having to craft reactionary statements for posting on social media. Enjoying his usual wall-to-wall television coverage, Trump just phoned in his xenophobia and hatemongering.

The billionaire renewed the crudest messages of a candidacy that has been built around the exploitation of anti-Muslim, anti-refugee, anti-immigrant bigotries. Even before many of the details of the attacks (which killed dozens and injured hundreds) were known, Trump was offering interviewers of messy mix of extreme responses, finger-pointing, and predictions of peril.

“I would close up our borders to people until we figure out what’s going on,” he announced on Fox & Friends. “We have to be very, very vigilant with who we let into this country. We are taking in people without real documentation,” continued Trump. “We don’t know who they are or where they’re from. We don’t learn. I will tell you I’ve been talking about this for a long time. This whole thing will get worse as time goes by.”

Trump’s claims are wildly off the mark, and experts have consistently challenged his attempts to stoke fears about refugees and immigrants. Seth Jones, director of the International Security and Defense Policy Center at the RAND Corporation, testified before Congress last year that “The threat to the U.S. homeland from refugees has been relatively low. Almost none of the major terrorist plots since 9/11 have involved refugees. Even in those cases where refugees were arrested on terrorism-related charges, years and even decades often transpired between their entry into the United States and their involvement in terrorism. In most instances, a would-be terrorist’s refugee status had little or nothing to do with their radicalization and shift to terrorism.”

As he called in to television programs after television program, Trump offered more and less extreme variations on the “close-the-borders” theme (suggesting on NBC’s Today show that some people might get in with “absolute perfect documentation”). But there was no moderation when it came to talk of torture. “Waterboarding would be fine and if they could expand the laws, I would do a lot more than waterboarding,” he declared on Today. Authorities, Trump argued, “should be able to do whatever they have to do.”

Trump was at his worst when he turned his fire on Muslim refugees and Muslim Americans. “We’re having problems with the Muslims coming into the country,” he said in yet another interview. “You need surveillance,” claimed Trump. “You have to deal with the mosques, whether we like it or not. I mean, you know, these attacks aren’t coming out of—they’re not done by Swedish people, that I can tell you.”

“We can be strong and smart without advocating torture or bigotry.” — Hillary Clinton

Trump was brutal in his description of Brussels as “a disaster city… a total disaster” and aggressive in his dismissal of European leaders. He showed little of the sympathy and solidarity expressed by Vermont Senator Bernie Sanders, who spoke of the loss experienced by the families of the dead, of the pain experienced by “the people of Brussels who were the target of another cowardly attempt to terrorize innocent civilians,” and of the need to “stand with our European allies to offer any necessary assistance in these difficult times.”

Amid Cruz’s blame laying and Trump’s bombast, the Republican contender who has tried hardest to present himself as a rational alternative, Ohio Governor John Kasich, was reasonably pragmatic, calling on President Obama “to organize meetings with the leaders around the world and at the same time get himself in the position of where we can send teams of people immediately to Europe to begin to dig in terms of what we need to do to address the vulnerabilities we have.”

“The wave of terror that has been unleashed in Europe and elsewhere around the world are attacks against our very way of life and against the democratic values upon which our political systems have been built. We and our allies must rededicate ourselves to these values of freedom and human rights. We must utterly reject the use of deadly acts of terror,” argued Kasich. “We must also redouble our efforts with our allies to identify, root out and destroy the perpetrators of such acts of evil. We must strengthen our alliances as our way of life and the international system that has been built on our common values since the end of the Second World War comes under challenge from these and other actors of evil.”

The Ohioan declared that “we are not at war with Islam” and said that’s a struggle to contain extremism will “need to have a coalition of people. Both Arab Muslims who are going to join the coalition to destroy ISIS, the people in Egypt, the people in Saudi Arabia and Jordan and the Gulf states all know that they have an existential threat from radical Islam.”

Kasich’s statement echoed at least some of the measured tone of the Democratic front-runner, former secretary of state Hillary Clinton.

Clinton spoke in interviews of a “need to be in solidarity with our European allies and [of] why NATO is indispensable in our efforts to protect our country and our friends.” Clinton also spoke of the need to up “our security cooperation, not only in our own country among all levels of authorities but also with Europeans.” And, she said, “there has to be some honest reckoning about what works and what doesn’t work.” But, importantly, she added that “We can be strong and smart without advocating torture or bigotry. We will not let fear dictate our foreign policy.”

Clinton challenged Trump directly, by speaking of cooperation with NATO (which the billionaire has dismissed) and by rejecting Trump’s torture talk.”Our best and bravest intel and military leaders will tell you torture’s not effective. It puts soldiers and increasingly our own civilians in danger,” she said. “I do believe we have to give our law enforcement and intelligence professionals all the tools they need to do the job to keep Americans safe. But I don’t think they need to resort to torture.”

On ABC’s Good Morning America the former secretary of state described torture as an “open recruitment poster for more terrorists.”