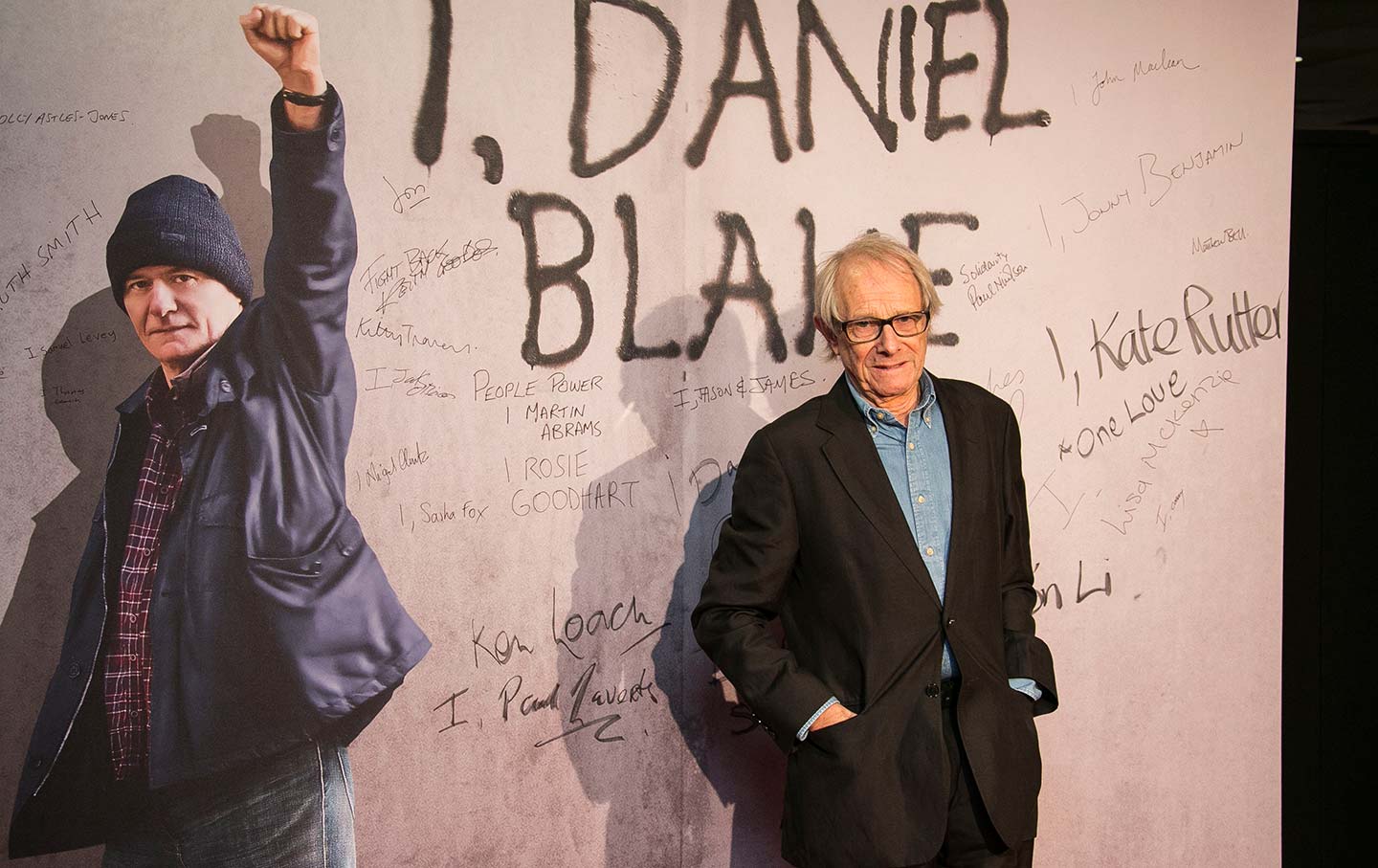 The British film director Ken Loach is one of the most celebrated cinematic voices of our time. A deeply engaged artist and one of a handful of directors to have been awarded the prestigious Palme d’Or twice, Loach’s work often takes up social and political themes. His oeuvre has spanned the Spanish civil war (Land and Freedom), the Los Angeles janitors’ strike (Bread and Roses), the occupation of Iraq (Route Irish), the Irish war of independence (The Wind That Shakes the Barley), and the coercive side of the welfare state (I, Daniel Blake). While the so-called “populist revolt” has triggered much debate on the role of economic inequalities and social exclusion, Ken Loach has been one of the greatest narrators of working-class consciousness and its transformations under neoliberalism.

In this conversation with Italian writer and political activist Lorenzo Marsili, Loach looks at the role of art in moments of political transformation, the evolution of the working class, the meaning of class struggle today, and the left’s failure to inspire radical change.

The interview was recorded during the shooting of DEMOS, a forthcoming documentary in which Lorenzo Marsili travels across Europe investigating transnational solidarity 10 years after the financial crisis.

Lorenzo Marsili: The debate on the role of art in political change has a long history. Today we are clearly going through a moment of great geopolitical transformation and global disorientation. What would be your vision of the role that creativity can play in such a moment?

Ken Loach: In general I think that in art you only have the responsibility to tell the truth. Any sentence that begins “Art should…” is wrong because it relies upon the imagination or perception of the people writing or painting or describing what are different roles that art can play. We need to assert the fundamental principles of ways in which people can live together. The role of writers, intellectuals, and artists is to look at these as the core principles. This is the long view of history, of struggle, so while you may have to make a tactical retreat, it is important to be aware that this is still a retreat, and the core principles are what we have to bear in mind. This is something that people who are not involved in day-to-day tactics can do.

LM: In your work the human element is not merely an illustration of the theory, but really incarnates and becomes the political. Would you agree that art has the power of showing that, ultimately, there are humans behind the great economic and political processes?

KL: Absolutely. Politics lives in people, ideas live in people, they live in the concrete struggles that people have. It also determines the choices we have—and the choices we have in turn determine the kinds of people we become. How families interact is not some abstract concept of mother, son, father, daughter; it has to do with economic circumstances, the work they do, the time they can spend with each other. Economics and politics are related with the context in which people live their lives, but the details of those lives are very human, often very funny or very sad and in general full of contradiction and complexity. For the writers I have worked with and for me, the relationship between the personal comedy of daily life and the economic context in which that life happens has always been very significant.

KL: Take a worker. His or her family is functioning or trying to function, but individually they have no strength because they have no power. They are simply a creature of that situation. But I do think that the sense of collective strength is something very important. This is where it gets difficult. It is not easy to tell a story where collective strength is immediately apparent. On the other hand, it is often crude and silly to finish every film with a fist in the air and a militant call to action. This is a constant dilemma; how do you tell the story of a working class family, tragically destroyed by economic and political circumstances, and don’t leave people in despair?

LM: Something that I find hopeful even in a bleak movie such as I, Daniel Blake is that we see the coercive state apparatus, but we also see the resilience of a certain human solidarity: The poor help each other out, and people stop and clap when Daniel Blake writes a scathing graffiti outside of the job center. It suggests that we haven’t been completely transformed into homo economicus; that there is still resistance towards the commodification of all life.

KL: Yes, this is something that middle-class commentators don’t get: Workers…take the piss even if they’re laughing. In the trenches there is a bitter comedy, and this is where we see resistance, even in the darkest places. But in particular, we’ve had this rise of food banks, where charity food is provided [and] you see the two public faces of our society. In I, Daniel Blake, when the woman is handing out the parcel of food to a woman who has nothing, she doesn’t say, “Here’s your charitable food”; instead she says, “Can I help you with your shopping?” On the one hand you have that generosity, and on the other is the state, which behaves in the most consciously cruel way possible, knowing that it is driving people to hunger. Capitalist society is caught in this schizophrenic situation and it is depending on us to organize the solidarity.

LM: It does often seem that traditional economic alienation has morphed into an alienation towards the state. Do you think this is at the heart of phenomena such as the rise of nationalism, of xenophobia, even Brexit? Beyond the scapegoating of migrants, there is perhaps also this sense that “there is nobody that stands up for me.”

LM: The focus of your work has always been on working class solidarity. You’ve lived through the transition from post-war social capitalism to the arrival of neoliberalism. How have you seen class solidarity transforming over this period?

KL: The biggest thing has been the reduction in the power of trade unions. In the 1950s and 1960s they became strong because people were working in social organizations like factories, mines, or docks and at that point it was easier to organize trade unions. But those old industries died. Nowadays, people work in a much more fragmented way. We are strongest when we can stop production, but if we’re not organized at the point of production, we are definitely weaker. The problem is that the production is now so fragmented and with globalization our working class now is in the Far East or in Latin America.

LM: Deliveroo or Foodora gig workers on a bicycle might not even consider themselves to be workers.

KL: Yes, or they have franchises, or they are so-called “self-employed.” It’s a huge issue. It’s an issue of organization for the working class.

LM: Do you think the concept of class still makes sense? Many people would not consider themselves to be working class even though they’re poor and sometimes definitely feel miserable.

LM: It’s one of the great challenges today: restarting the struggle among a fragmented population that doesn’t conceive of itself as part of a group.

KL: It’s a challenge for our understanding. It was very funny, I was recently talking to some very nice people in Japan who were writing an article and I was insisting on the necessity of understanding class and of conflict. A very nice woman told me, “We’re going to show your film to the Japanese government officials,” and I said, “Well, why?” and she said, “Well, to get them to change their mind,” and I replied, “But that’s the point I just made! They will not change their mind, they are committed to defend the interests of the ruling class and they’re not to be persuaded, they’re to be removed!”

It’s a very hard point to get across when the idea of making the system work is so deeply embedded. That’s one of the terrible legacies of social democracy that we’ve got to fight.

LM: It’s an effective form of social control, when your subjects believe they can talk to you and that you will take their concerns into account.

KL: This is why we need to revive the whole idea of transitional demands. We have to make demands that are absolutely reasonable based on the interests of the working class.

LM: I want to bring this to a close, but I notice you once ran a campaign for the European Parliament.

LM: It’s interesting to me how Europe was never really debated very much here in the UK. Suddenly, after Brexit, everybody is talking about the European Union and it’s become the most talked-about issue after football. Do you feel there is still hope of constructing a transnational democracy or is it simply too late?

KL: I really don’t know the answer. But I do think that international solidarity is clearly important. Can it be organized within Europe? I don’t know. The structure of the European Union is indeed so difficult, it is hard to see how we introduce the change without starting all over again. Obviously, every change has to be endorsed by every government and we all know how difficult the practicality of that process is. Clearly, we need a different Europe based on different principles: on common ownership, planning, equalizing economies, sustainability, and generally working toward equality.

But we simply can’t do that while big corporations are prioritized, while profit is prioritized, and while the legal system prioritizes profit. Effecting that change is beyond my pay grade. Yanis Varoufakis assures me it can be done. I’m sure he’s right. I trust him, but I don’t know how.