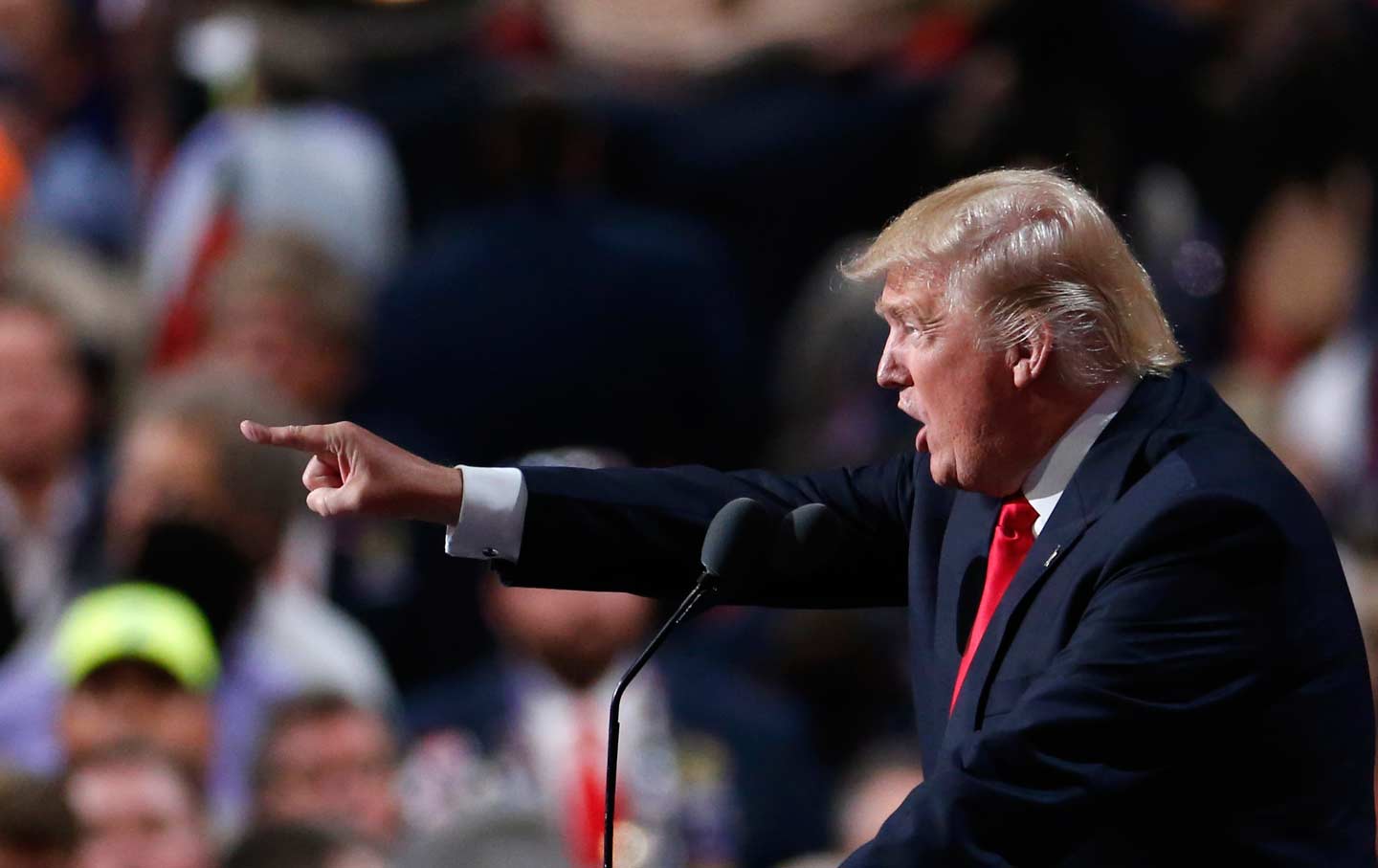 Cleveland—Donald Trump accepted the Republican nomination for president on a Thursday night in the long hot summer of 2016 with a speech that signaled his determination to exploit fears of violence as part of crusade to seize the White House from the Democrats.

Promising a fierce campaign on behalf of law and order, he declared:

Our Convention occurs at a moment of crisis for our nation. The attacks on our police, and the terrorism in our cities, threaten our very way of life. Any politician who does not grasp this danger is not fit to lead our country.

Americans watching this address tonight have seen the recent images of violence in our streets and the chaos in our communities. Many have witnessed this violence personally, some have even been its victims.

I have a message for all of you: the crime and violence that today afflicts our nation will soon—and I mean very soon—come to an end. Beginning on January 20th of 2017, safety will be restored.

It will, for those who recall a Republican convention almost 50 years ago.

Richard Nixon accepted the Republican nomination for president on a Thursday night in the long hot summer of 1968 with a speech that signaled his determination to exploit fears of violence as part of crusade to seize the White House from the Democrats.

Promising a fierce campaign on behalf of law and order, he declared:

As we look at America, we see cities enveloped in smoke and flame.

We hear sirens in the night.

And as we see and hear these things, millions of Americans cry out in anguish.

Did we come all this way for this?

Did American boys die in Normandy, and Korea, and in Valley Forge for this?

The permissive ’60s would end, Nixon argued, with the transition of power from a Democratic administration to a Republican who was prepared to crack down on violence.

“Tonight, it is time for some honest talk about the problem of order in the United States,” declared Nixon in 1968.

“It is finally time for a straightforward assessment of the state of our nation,” declared Trump in 2016.

“The most basic duty of government is to defend the lives of its own citizens. Any government that fails to do so is a government unworthy to lead,” Trump told Republican delegates in 2016.

“When the nation with the greatest tradition of the rule of law is plagued by unprecedented lawlessness…then it’s time for new leadership for the United States of America,” Nixon told Republican delegates in 1968.

Trump campaign manager Paul Manafort indicated Monday that his candidate was looking to Nixon’s 1968 speech as a model. “The Nixon 1968 speech—if you go back and read that speech—is pretty much on line with a lot of the issues that are going on today,” Manafort explained. “And it was an instructive speech.”

The language is different enough to guard against charges of plagiarism. Nixon was rougher on people who relied on welfare programs, while Trump was rougher on immigrants, promising to launch crackdowns, to build walls, and to “immediately suspend immigration from any nation that has been compromised by terrorism until such time as proven vetting mechanisms have been put in place.” Nixon talked about Vietnam and fighting communism. Trump talked about Syria and fighting Islamic terrorism.

But the core premises adopted by Nixon in 1968 and Trump in 2016 are parallel—not just on criminal-justice issues but also on questions about how the United States might project an image of strength on the global stage. Trump’s speech even included an extended riff on the failings of President Lyndon Johnson, the man Nixon sought to replace.

But it was difficult to listen to Donald Trump on Thursday night without getting a powerful sense that he plans to run in 2016 as Richard Nixon did in 1968.

That should give Americans pause. While Nixon promised to “bring us together,” he actually tore the country apart, adopting a “Southern strategy” that sought to capitalize on resentment over progress on civil rights and voting rights, adopting the bizarre calculus that blames liberal social programs for poverty and hopelessness, ushering in policies that set the stage for a mass incarceration of Americans that now even conservatives recognize as a crisis. The peace he promised at home proved to be as illusive as his “secret plan” to end the war in Vietnam.

Nineteen sixty-eight was a difficult and challenging moment in America. The summer of that year saw racial division, clashes in the streets, and traumatizing instances of violence in the nation’s cities. Nixon exploited the difficulties, the challenges, the violence in order to usher in a new politics of code words and backlash.

Twenty sixteen is a difficult and challenging moment in America. The summer of this year has seen racial division, clashes in the streets, and traumatizing instances of violence in the nation’s cities. Trump is exploiting the difficulties, the challenges, the violence in order to usher in a new politics of code words and backlash.

“We make great history tonight,” said Richard Milhous Nixon in the summer of 1968. “We do not fire a shot heard ’round the world but we shall light the lamp of hope in millions of homes across this land in which there is no hope today. And that great light shining out from America will again become a beacon of hope for all those in the world who seek freedom and opportunity.”

“History is watching us now,” said Donald John Trump in the summer of 2016. “It’s waiting to see if we will rise to the occasion, and if we will show the whole world that America is still free and independent and strong.”

The parallels point to what may turn out to be the most vital question of 2016: Will history repeat itself?