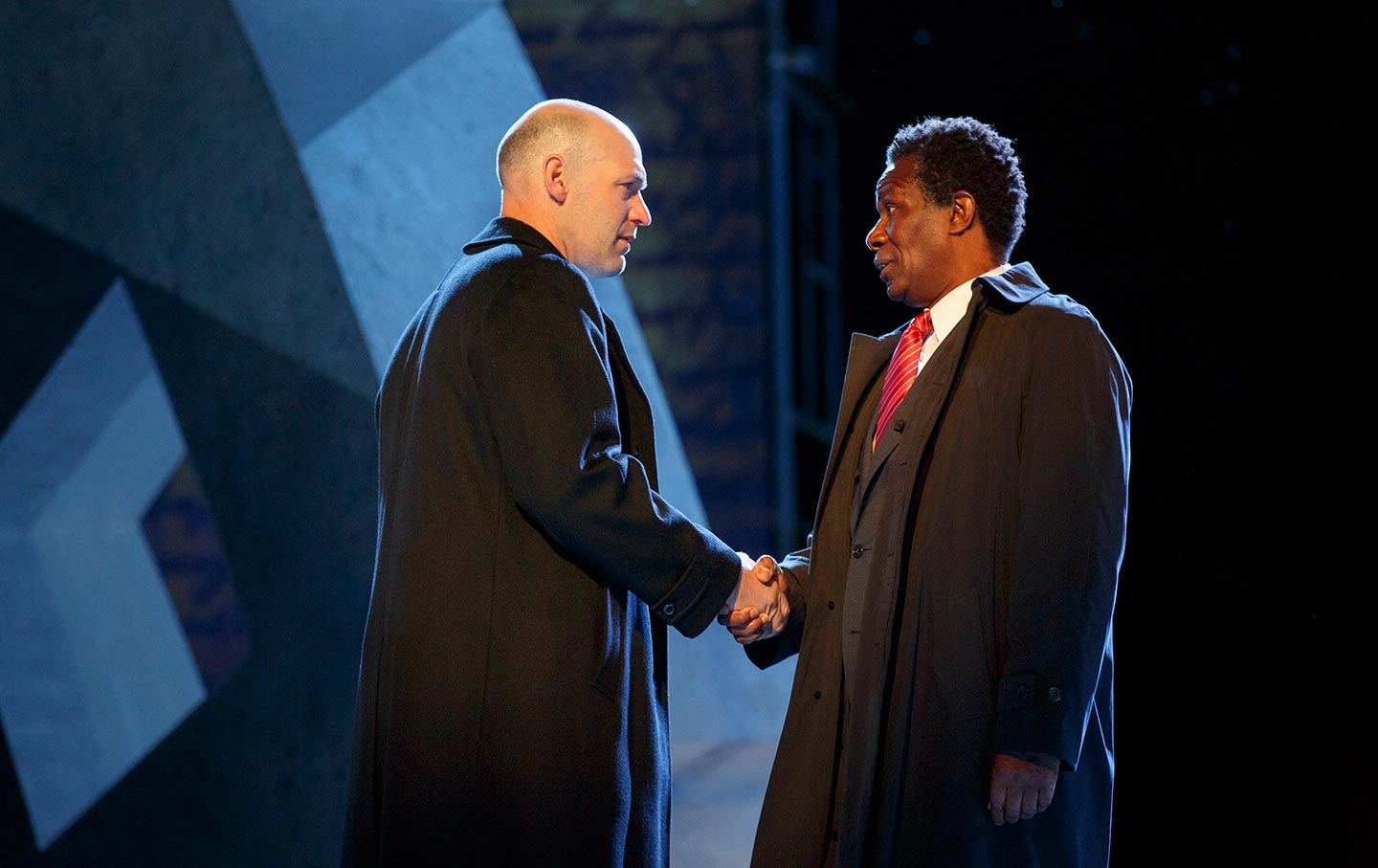 Corey Stoll as Brutus and John Douglas Thompson as Cassius in The Public Theater’s Free Shakespeare in the Park production of Julius Caesar at the Delacorte Theater in Central Park, New York. (Joan Marcus)

The Public Theater’s controversial Shakespeare in the Park production of Julius Caesar, featuring Gregg Henry as a Donald Trump lookalike in the title role, sent me scurrying to my classics shelf to answer the unasked question: Was Julius Caesar anything like Donald Trump? Well, they were both rich, promiscuous, colorful, vain, shrewd manipulators of popular opinion, beloved by many working-class people, insanely ambitious, and able to exploit the weaknesses of their respective political systems. They both bought popular affection with entertainments—Trump had The Apprentice, Caesar put on stupendous gladiatorial shows. They both had three wives.1

That’s about it. Caesar was a brave and brilliant military commander whose men were devoted to him. Trump got five deferments and told Howard Stern that risking herpes while having lots of sex was his “Vietnam.” Caesar pardoned his enemies—maybe too often; Trump is still tweeting about Hillary and Obama. Caesar was keen on public works and civic improvements that actually benefited people, unlike the many hideous buildings erected by our president in his former life. Caesar employed the foremost scientists of the day to devise a calendar that lasted over 1,500 years; Trump has contempt for science and indeed any kind of expertise. Caesar was a widely read polymath and a great writer too: The Gallic Wars, his seven-book account of his conquests in Gaul, has tested students of Latin for 2,000 years with sentences like “The baggage having been deposited, we pitched our camp along the shore.” Our Donald is a proud ignoramus, and how likely is it that students in 4017 will be learning English by studying The Art of the Deal? About as likely as that the month of July, named for Caesar, will be renamed Trumpy.2

On the whole, I would say Trump should be honored to be compared to Caesar, who is, after all, one of the towering figures of Western history. That’s not how his fans saw it, of course. After Donald Trump Jr. tweeted his objections, Delta and Bank of America withdrew their support, and the National Endowment for the Arts felt compelled to announce on its website that it had nothing to do with the production. The performance I attended was briefly shut down by two protesters who had to be hustled out of the theater and could be heard shrieking outside for sometime afterwards until they were arrested.3

Still, I can see why conservatives are upset, although their claims to be shocked, shocked, at the portrayal of the assassination of a sitting president would carry more weight if they had protested when Minnesota’s Guthrie Theater put on the play in 2012, with a Caesar modeled on then-President Obama. And let’s not forget the comments of recent White House guest Ted Nugent, who called for Hillary to be hanged and told Obama to “suck on my machine gun.” No conservative outcry followed that incitement to violence. What bites the objectors, I’ll bet, is not the murder, but the satire: Gregg Henry has the lumbering gait, the expansive, impatient gestures, the super-confidence and vulgarity of our own pussy grabber in chief. (Speaking of which, Tina Benko’s Calpurnia is a dead-on Melania, complete with Slovenian accent, high-fashion costumes and general air of hauteur and boredom.) But Henry doesn’t play Trump as obviously repellent. He’s so buoyant with energy and fun you just have to like him, which makes his assassination a genuinely horrifying moment. It’s hard to rejoice in the killing of someone who makes you laugh. After the murder and Mark Antony’s funeral oration—thrillingly delivered by Elizabeth Marvel with a Southern accent, meant I suppose to convey senatorial smarm and false populism—the performance loses steam. But then, so does the play. Do you even remember the last act?4

The protesters could have saved themselves a lot of trouble if they had bothered to read the play first. As others have noted, it’s hardly an endorsement of assassination. Living in the aftermath of the ruinous Wars of the Roses, and Henry VIII’s traumatic break with the Catholic Church, Shakespeare had a deep appreciation for the virtues of stability. His history plays are as vivid a picture as we have of the horrors unleashed when the state, even a very imperfect one, is overthrown and political freelancers have their way. In Julius Caesar, the conspirators are envious malcontents—is it intentional that in the Public’s production, most of them are black? Caesar is dead right about Cassius’s “lean and hungry look.” Brutus, the only genuine idealist among the assassins, is abstract and bloodless and inadequate to the task, so stuck on his self-image of magnanimity he lets Mark Antony give Caesar’s funeral oration, a fatal mistake, because Antony gives the speech of a lifetime (“Friends, Romans, countrymen, lend me your ears,” etc.) and whips the populace into a fury against their supposed liberators. Far from preventing dictatorship and preserving Rome, Brutus and the rest set off a bloody civil war that ends in their own deaths and that of the republic. When the dust clears, long after the action of the play, the minor character Octavius has become the emperor Augustus.5

The director Oskar Eustis’s contemporary interpretation makes for exciting theater—there are no solemn men intoning in togas here—but as the play goes on, the literalness of it becomes an increasingly awkward fit. In an article by the critic Matt Wolf, included in the playbill, Eustis claims that “the basic action of Julius Caesar is that a group of idealistic patriots and small-d democrats recognize that their republic is in danger from a leader who is threatening to overthrow democratic norms and establish an outright dictatorship.”6

Small-d democrats? Democratic norms? Such hardly existed in Shakespeare’s day—he himself was a monarchist. Rome itself was never a democracy, even if you just count free male citizens. It was an oligarchy and a plutocracy with some democratic features, mostly cosmetic; the conspirators belonged to the reactionary senatorial elite, which was interested in preserving its own power. As Arthur D. Kahn writes in The Education of Julius Caesar, “They spoke of liberty and meant plunder.” Brutus was no Bernie Sanders. When Eustis portrays the common people as demonstrators battling the police and shouting, “This is what democracy looks like,” he wrongs both history and the play. The common people adored Caesar. As the assassin Casca scornfully remarks, in the play’s one updated line, “If Caesar had stabbed their mothers on Fifth Avenue, they would have done no less.” For Shakespeare the people were a confused and violent mob, easily swayed by passion and demagoguery. In the aftermath of the assassination they tear the poet Cinna to pieces even after he insists he is not the same person as Cinna the conspirator. “Tear him for his bad verses, tear him for his bad verses.” In the Central Park production, the poet is killed by the police. That flatters the Manhattan audience’s left-liberal sensibilities, but, unfortunately, in history and in Shakespeare, it didn’t happen that way.7

A true update of Julius Caesar would have to reckon with the fact that a democracy is only as good as its people. Sometimes “what democracy looks like” isn’t what we’d like to see.8