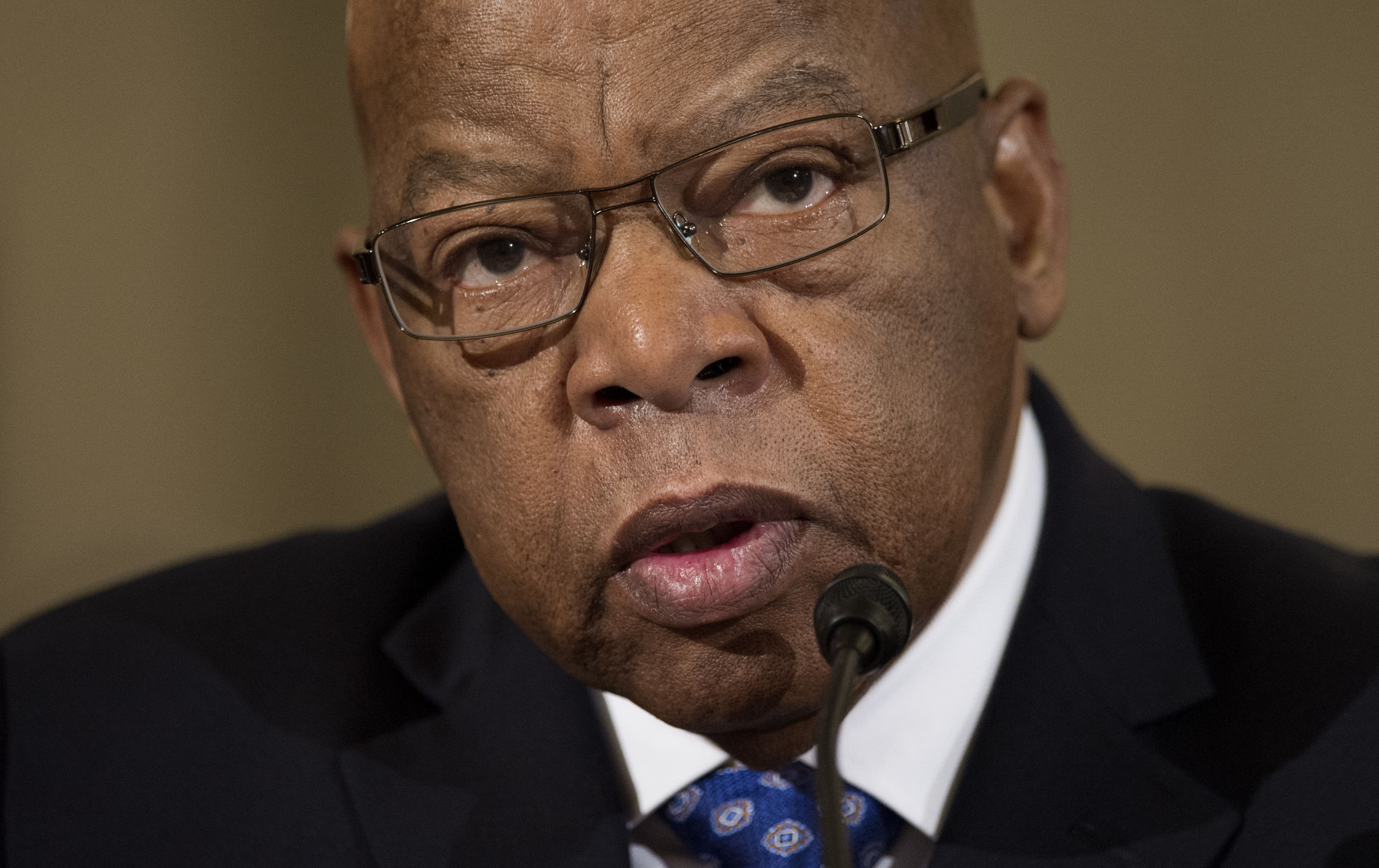 On the day more unconfirmed, and maybe unconfirmable, details came out about the intelligence community’s intensifying investigation into ties between the Donald Trump campaign and the Russian government, tensions in Washington, DC, spiked. Dozens of House Democrats poured out of a briefing by FBI director James Comey and other intelligence agency leaders obviously furious, though they couldn’t disclose what they heard in the classified briefing. Representative Maxine Waters of California walked out to reporters and spit fire: “It’s classified and I can’t tell you anything. But the FBI director has no credibility!”

A short time later, Chuck Todd of NBC’s Meet the Press released a remarkable clip of his recent interview with Representative John Lewis, which will air on his show Sunday. In his calm, thoughtful, deliberate way, Lewis channeled Waters’s rage—and opened a new front in the campaign against Trump.

Would Lewis look for ways to cooperate with Trump, Todd asked? “It’s going to be very difficult. I don’t see this president-elect as a legitimate president. I think the Russians participated in helping this man get elected. And they helped destroy the candidacy of Hillary Clinton,” Lewis told Todd. “I don’t plan to attend the inauguration. It will be the first one that I miss since I’ve been in Congress. You cannot be at home with something that you feel that is wrong, is not right.”

Todd seemed shocked. “That’s gonna send a big message to a lot of people in this country,” the Meet the Press moderator said.

“I think there was a conspiracy on the part of the Russians and others,” Lewis replied calmly. “That’s not right. That’s not fair, that’s not the open Democratic process.”

I’m not in the habit of trusting US intelligence agencies. I am in the habit of trusting Lewis. Right now progressive Democrats, including Senator Bernie Sanders, are hearing things from the intelligence agencies they are overwhemingly inclined to doubt, and yet they are reacting by at least demanding a bipartisan investigation into Russian interference with the election—and at most, like only Lewis so far, to say that Trump is not the “legitimate president.”

Will others follow? Representative Barbara Lee, another progressive stalwart, told MSNBC’s Chris Hayes that she agrees with Lewis. The sole opponent of the Afghanistan intervention, a stalwart foe of the Iraq war, Lee had already said she would boycott Trump’s inauguration, but she acknowledged that Lewis went beyond where she did. And then she went there.

One Democrat who stepped out to kneecap Lewis is President Obama’s former campaign manager David Axelrod. The CNN contributor told the network Friday night that “I’m not comfortable” with Lewis’s calling Trump “illegitimate,” adding, “The greatest triumph for Russia would be to legitimate their charges about our democracy. I worry about our institutions. I worry that we’re in this mad cycle of destruction. I understand the outrage. But where is this all going?”

Axelrod acknowledged that Trump was the number-one peddler of birtherism—but insisted that this bolstered his argument. “One of my great concerns about the president-elect is that I think sometimes he has disregard for our institutions and norms and that contributes to a weakening of our democracy,” he continued. “So, I just don’t want to see this constant churning that leads to kind of a reflexive reaction every time a president gets elected who we don’t like.”

Let me break this down for Axelrod, though he knows everything that I do about American politics, and then some. Republicans are the ones who have a “reflexive reaction” to Democratic presidents they don’t like: peddling birther garbage and obstructing Barack Obama, after obstructing, then impeaching, Bill Clinton. The last GOP president, George W. Bush, although he lost the popular vote (like Trump) and owed his presidency to the Supreme Court, nonetheless got Democratic backing for his education-reform push, his Medicare-drug legislation, his tax cuts, and even his Iraq War authorization. There was no “reflexive” attempt to undermine Bush. He brought greater opposition on himself, including GOP opposition, with his disastrous war of choice in Iraq, his bungling of the occupation, his shameful neglect of New Orleans after Hurricane Katrina, and his passivity in the face of evidence that shady banking practices were going to crash the economy.

So I’m going to go with Lewis, Lee, and Waters over David Axelrod on this one. I don’t want to bring race into anything where it doesn’t matter, but I did happen to notice all three leaders are African-American. Maybe that’s a coincidence. Or maybe it means that people who’ve seen the worst of American injustice are trying to warn the rest of us when it’s coming for us again.