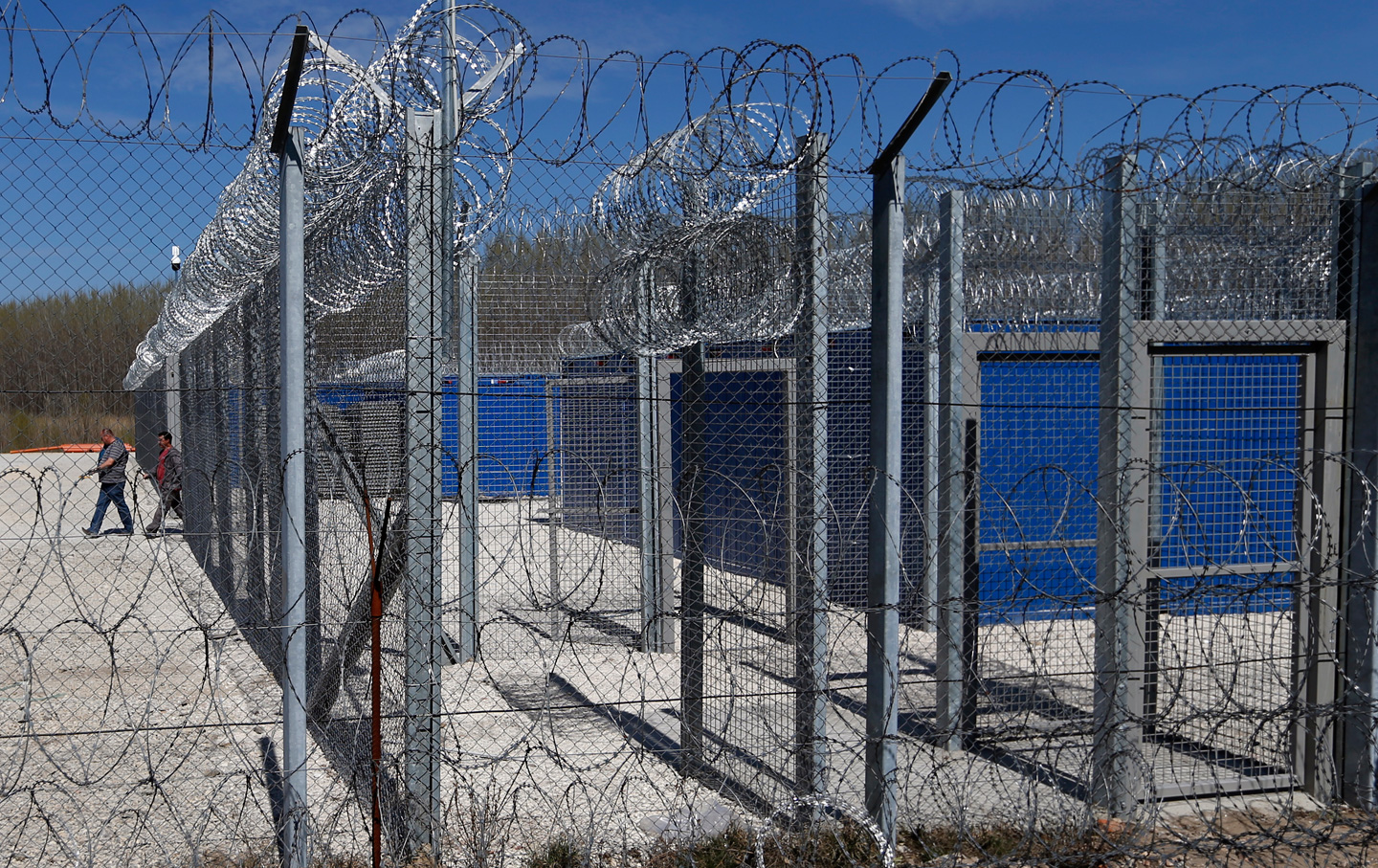 Budapest—“It looks like a prison. For me and my husband—okay. But the children? How can we take them there?”

I was talking with Marua Surchi, a lanky veterinarian from Dohuk in Iraqi Kurdistan, outside of an abandoned supermarket on the Serbian-Croatian border. The derelict building with no electricity serves as a final stop for migrants in Serbia before crossing over into Hungary to seek asylum. A windowless room furnished with nothing more than blankets on a cement floor had been the Surchi family’s home for a month.

A few feet away, a tall border fence topped with coils of razor wire jutted out of the dirt. On the other side we could see a warren of shipping containers packed together side by side, each one covered in more razor wire. The complex is one of two new detention centers for asylum seekers in the Hungarian transit zone.

“What did we do?” Marua’s husband, Bashar, asked in a quiet voice, gesturing toward the camp. “We left Kurdistan because there is war. Am I a terrorist? No, I am just a human.”

“We ran from ISIS,” Marua exclaimed, as one of their two young daughters wiggled in her lap. “And now to be sent there—just like prisoners….why?”

Their anguish was palpable. The next morning new regulations from Prime Minister Victor Orbán’s government were to come into effect under which all asylum seekers—including families fleeing war like the Surchis, and unaccompanied minors between the age of 14 and 18—will be automatically detained in the transit zone while their claims are investigated. The process can take many months—and most frequently ends in rejection. Hungary only took in 400 out of the 30,000 who claimed asylum in 2016.

The new law institutes blanket detention for all asylum seekers without differentiating between people who have suffered trauma or need special care and those who might on an exceptional basis warrant being detained. “People who are effectively held in a barbed wire encampment which is guarded by armed guards are not getting a decision on detention that they could then challenge before a court,” says Marta Pardavi, co-director of the Hungarian Helsinki Committee, a prominent human-rights organization in Budapest. “That’s very clearly a violation of the EU asylum law and human rights standards.”

For the Surchis, who paid smugglers to get from Dohuk to Turkey to Bulgaria, and then Serbia, where they’ve already been stuck for five months, the new law presents them with two bad options: stay in Serbia, where conditions are very poor, or enter the prison-like camp and wait in hopes they will be granted asylum.

The two new detention camps and the construction of a second fence along Hungary’s 108-mile border with Serbia are the latest in a series of anti-migration measures enacted by Orbán’s populist right-wing government, which is also in the process of deploying a new “border hunter” police force.

Calling migration “a poison” threatening European culture, Orbán refused last year to take in Hungary’s quota of 1,294 refugees under an EU program to relocate 160,000 refugees from Greece and Italy among all member states. In the run up to a referendum to close Hungary’s doors to refugees, Orbán spent 15 million euros on a national anti-migrant campaign that painted refugees as criminals threatening to “attack” the country. Voters overwhelmingly approved the measure, but turnout was lower than the 50 percent required to validate the referendum.

“Sadly what we’re witnessing is a complete dismantling of refugee protection in Hungary,” says Pardavi.

Orbán’s government vociferously defends the new detention centers, calling them “physical and legal barriers to protect Europe’s borders.” It argues that the camps in the transit zones do not constitute detention because asylum seekers can leave anytime to Serbia, which it considers a safe third country.

But a recent ruling by the European Court of Human Rights found that Serbia could not automatically be considered safe and that detention in the transit zone is, legally speaking, detention.

Orbán has accused the Helsinki Committee, which brought the infringement proceeding, of carrying out the political agenda of Hungarian-American George Soros’s Open Society Foundation, which partially funds them. In January, a leader of Fidesz, Orbán’s party, said it was time to “sweep out” the Helsinki Committee and other OSF-funded NGOs from the country.

There is little chance Orbán will temper his radical anti-immigrant stance anytime soon. Polls show that Hungarians are less tolerant than other Europeans and widely view refugees as a threat. The issue has been a big winner for Orbán. “Whenever the top political agenda is migration, whenever news is dominated by the refugee crisis,” says Csaba Toth of the liberal Republikon Institute, “Fidesz’s popularity goes up. When other issues such as education, healthcare and the economy emerge, Fidesz’s popularity goes down. It’s vital for Orbán to keep migration on the agenda.”

Thanks in part to Orbán’s anti-migrant campaign, xenophobia is on the rise and the false perception has been created that “hundreds of thousands of migrants are waiting to storm the country and cause havoc,” says Lydia Gall, a researcher on Eastern Europe and the Balkans for Human Rights Watch. There are between 7,000 and 8,000 migrants in Serbia, and the western Balkan route has been blocked. “These are people that Hungary has the capacity to deal with.”

Back at the abandoned supermarket with Marua, I also met Mustafa Akram, who fled Bagdad with his wife and five children after a militia group kidnapped one of them from school. Like the Surchi family, they were all living in one room of the former store, waiting for their turn to get into Hungary.

Ironically, Mustafa owned a supermarket in Iraq. Mustafa said he tried with his family a few weeks ago to get past the border fence, but the police caught them. He pulled out his phone to show me a photo of himself with a swollen face; he said the police sprayed pepper spray in his eyes and scared them with barking dogs. Then they were pushed back to Serbia.

He led me to the second floor where he pushed open a skylight. Standing on a crate I could look out over the top of the new detention center next door. The razor wire gleamed in the moonlight. “See,” he called up to me, “it looks like a prison camp.” I had to agree.

Both Mustafa and the Surchi family told me they cannot go back to Iraq. So, very reluctantly, when their turn comes they plan to try their luck with the Hungarian asylum process—even though they’ve heard that their cell phones will be confiscated and they could be pushed back to Serbia even after waiting for months in detention.

The fear of being cut off from friends and family and the outside world really upset Marua. “I hope the world won’t forget us in there,” she said. “We want people to come see us, to see our situation.”