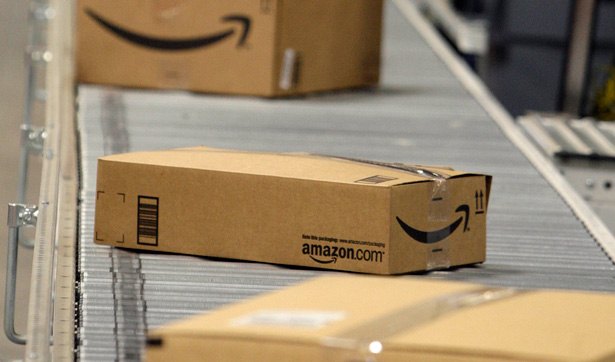 At the end of November, hundreds of Amazon employees in Germany began staging a series of wildcat strikes. On Monday, hundreds of workers again walked off the job in an effort to put pressure on the company during the busy days before Christmas. The Ver.di union says Amazon workers receive lower wages than others in retail and mail-order jobs. According to the the union, “The Amazon system is characterized by low wages, permanent performance pressure and short-term contracts.”

Back in February, Amazon.com was under attack in Germany for alleged mistreatment of workers following a television documentary that showed immigrant employees living in cramped housing under surveillance by security guards in neo-Nazi garb. Workers were promised €9.69, but upon showing up for work, learned they would only be compensated €8.52 ($11.37) per hour.

Amazon later said it canceled the contract with that security company whose guards were accused of harassing workers, searching their rooms and frisking them to make sure they had not taken food from the dining room, Businessweek reports.

German workers now plan to stage a one-day warning strike at Amazon logistic centers in Leipzig, Bad Hersfeld and Graben, and on Monday some of the strikers plan to rally outside the retailer’s Seattle headquarters in hopes of drawing in local union workers as well as sympathetic members of the public, the New York Times reports.

The Times notes there appears to be a “backlash developing” against successful tech companies like Amazon for driving up housing prices, contributing to income disparities and expanding a generally obnoxious bourgeois attitude among “tech bros.” For example, young Internet entrepreneur founder Peter Shih posted online a list of ten things he hates about San Francisco in August that included homeless people, the “constantly PMSing” weather and “girls who are obviously 4s and behave like they’re 9s.”

Amazon sales in Germany are skyrocketing. Last year, they rose by 21 percent, and the country is the firm’s second biggest market after the US, responsible for about a third of all overseas sales, the BBC reports. And while this is certainly a labor dispute over the familiar terrain of living wages, the Times notes there is also a bigger question of whether the warehouse workers should have control over their workplace. (Employees known as “pickers” assemble Amazon orders. These jobs are extremely physically demanding, and pickers are constantly monitored, and are not provided job security).

“The workers are treated more as robots than human,” Markus Hoffmann-Achenbach, an organizer for Ver.di at the Amazon warehouse in the city of Werne, said by email. He was on his way to Seattle to participate in the demonstration.

“As a worldwide company,” Mr. Hoffmann-Achenbach added, “Amazon should treat their workers fairly and with respect in every country. The solidarity of American unions and Ver.di, the united services union of Germany, is a sign that social movements are not bounded by national borders and that in times of globalization the workers worldwide stand together as one.”

Nancy Becker, an American who has been an employee of Amazon in Germany since 2001, is also traveling to Seattle for the rally.

“I’m coming to Seattle to dare Jeff Bezos to try working as a picker for a single week,” she said. “I’m sure he would not survive.”

This is the first time the union has taken a Germany wage dispute outside the country to a corporation’s doorstep, according to Mechthild Middeke of Ver.di.

While Middeke stresses what’s happening in Seattle is not a strike, she adds it is an act of solidarity involving a number of US unions, including the Teamsters and the Service Employees International Union, two of the largest unions in the United States.

“Employees at Amazon deliver excellent work every day, and for that they rightfully demand the assurance and protection of retail and mail-order sector wage agreements, as well as healthy working conditions and respectful treatment,” the union said in a statement.