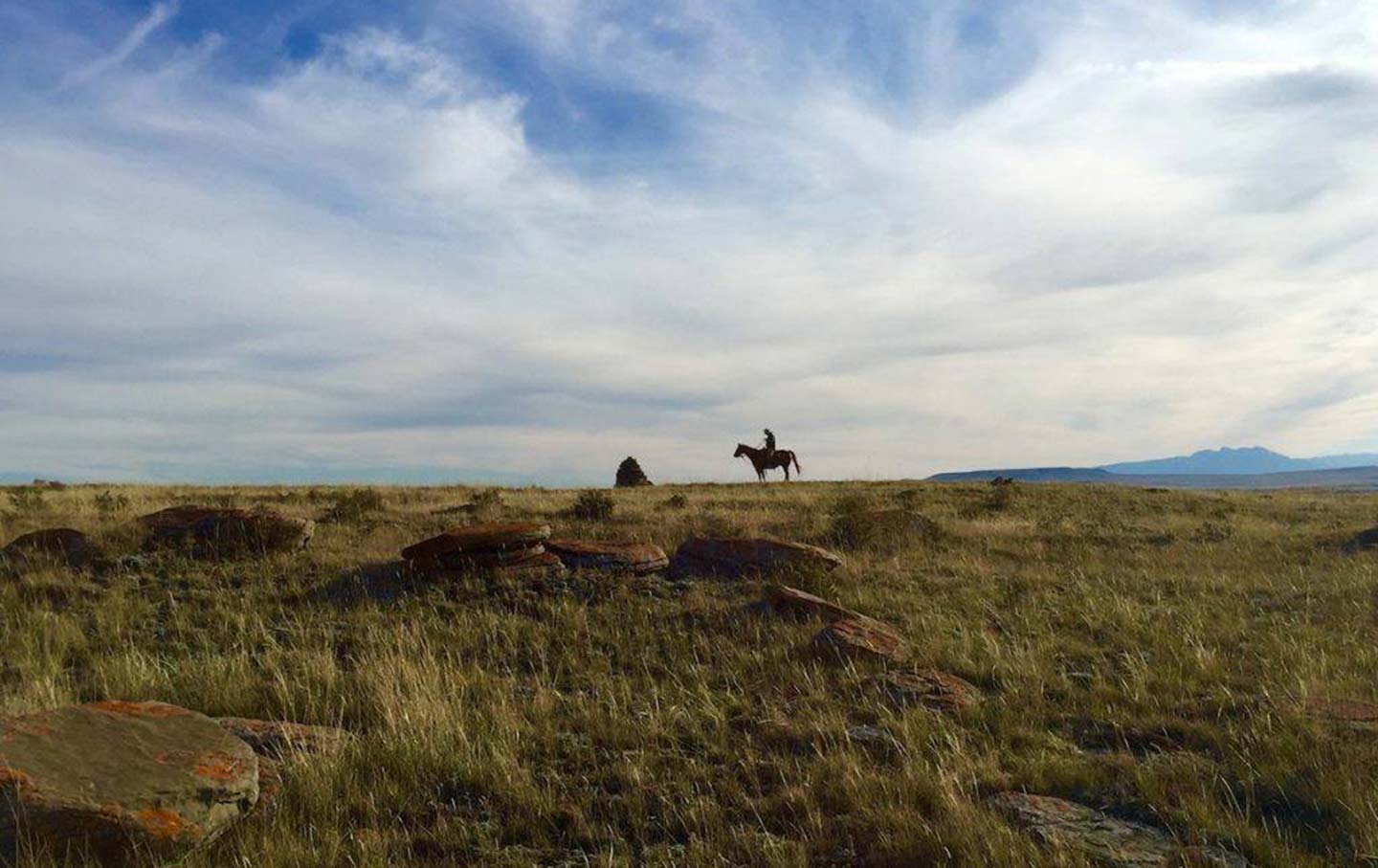 A rancher on his horse walking through his farm in the documentary based on Rancher, Farmer, Fisherman. (Screenshot via Youtube)

Middle America hasn’t always been a caricature, drawn as the crude opposite of the so-called “liberal coastal elite.” Before the 1960s, when newspaper columnist Joseph Kraft popularized the term “Middle America” with all its contemporary political baggage, the vast midsection of the country was defined more by geography and environment than politics—it was a place pulsing with farms and industries, fed by the arteries of the 1.2 million-square-mile Mississippi River Basin. This region’s working landscapes have never been much associated with the loftiest ideals of environmentalism. Though John Muir, the eccentric wanderer and father of the conservation movement, trekked along the Mississippi Valley in his youth, he was ultimately more focused on protecting unpopulated Western wilderness than in places that were plowed, fished, mined, or otherwise heavily worked by human hands. But arguably, the ranching, farming, and fishing landscapes of Middle America, and the people who manage them, play as important a role in America’s environmental health as wide-open wilderness does. As conversations about the divisions between the “coastal elites” and the “heartland” have become ever more politically charged, we’ve perhaps forgotten Middle America as a place—and the fundamental role that many of its residents play, growing our food, mining our minerals, and keeping watch over the some of the nation’s most important natural landscapes.

In Rancher, Farmer, Fisherman: Conservation Heroes of the American Heartland, Miriam Horn reminds us what Middle America looks like as a place, not an ideology. As Arlie Hochschild did for her bestseller Strangers in Their Own Land, Horn ventures away from her home in a coastal city (in this case, New York) to become acquainted with people whose lives are politically and culturally very different from her own. She visits a series of communities along the Mississippi Basin and profiles people who have a rare ability to stake out common ground on environmental issues with rivals, outsiders, and adversaries. The book is not an attempt at sociological or anthropological analysis. It’s a search for hope, and a kind of tribute to the people who work on the land or in the water. In a few long chapters, Horn profiles several minor characters and five major ones—a rancher in Montana, a farmer in Kansas, the head of a Mississippi River barge company, a commercial fisherman, and a shrimper, the latter two both from Louisiana—each leading a complex struggle to defend the working landscapes and waterways that provide their own livelihoods.

What she finds in each case challenges at least some of the recent narratives we’ve spun about Middle America.

Horn’s book argues that it’s possible to win environmental victories even in the most conservative parts of Middle America.

Horn’s heroes are pragmatic conservationists. They are not anti-science, but they’re skeptical of the pro-environment claims of any interlopers who haven’t spent time on the landscape or of any proposed solutions they can’t apply to their own work. Several of Horn’s characters have specialized expertise that often rivals or surpasses the understanding of technical experts, regulators, and academics. She describes how a couple of Montana hunters convinced federal agencies to work with them to monitor grizzly bears and lynx, because the pair were far better than the scientists at following paw prints and scat, and how Gulf fisherman helped redesign regulations to better protect fish stocks. She also gives us characters like Justin Knopf, a Kansas wheat farmer, who handles complex computer and GPS systems to manage his fertilizers and pores over the research on insecticides and pollinators as diligently as a professor of agronomy.

An overarching message of the book is that it’s still possible to have environmental victories even in the most conservative parts of Middle America—if people put practical considerations ahead of their egos and manage to talk to one another. Moreover, Middle America’s politics cannot be as easily pigeonholed as polls might suggest. In Horn’s first chapter, a group of Montana rancher friends—including two who are “mostly liberal,” two conservatives, and one Horn describes as a “wild card”—make strange bedfellows with groups as disparate as the National Rifle Association, the Wilderness Society, and Trout Unlimited. They secure hundreds of thousands of acres of ranch lands in conservation easements—to keep them out of the hands of oil and gas companies—and thereby protect the ranching economy for future generations. In 2006, after building a large and noisy coalition in favor of conservation, they succeed in withdrawing federal lands along the Rocky Mountain Front Range (one of the largest wild mountain ecosystems in the country) from oil and gas leasing with the help of then–US Republican Senator Conrad Burns. And in 2014, after persuading another Republican member of Congress, then-Representative Steve Daines, to help, their coalition manages to arm-twist the “do-nothing” Congress into passing the Rocky Mountain Front Heritage Act (as a rider on a defense bill) and protecting 275,000 acres of wildlife habitat.

Alhough the author doesn’t editorialize much, there’s clearly a persuasive case being made here. Horn works for the Environmental Defense Fund, and in nearly every story, there’s a somewhat formulaic moment when the hero discovers that environmentalists aren’t nearly as bad as their reputation suggests. She has chosen people and stories who illustrate a specific set of ideas—that rural people can be wise and that those who manage our lands and waters are worth listening to. She doesn’t attempt to capture the full range of diversity of either opinion or culture that exists across Middle America. Four of the five main characters are white men. They are arguably representative of their male-dominated professions—fishing, farming, ranching, and commercial barging. One chapter focuses on a Vietnamese-American woman who advocates for her community of shrimp-netters. Occasionally, the profiles verge on hagiography, and there’s a danger that spotlighting such a narrow range of characters romanticizes life in the middle of the country or oversimplifies serious racial, cultural, or economic tensions. Overall, the book tends to minimize or leave out stories of those who have far less power over decisions about land and environment but feel the brunt of pollution (disproportionately people of color) or those who’ve historically been dispossessed (especially indigenous people).

But even if there are blind spots, there’s much to be hopeful about in this book and many lessons on what it takes to build the kinds of bridges and foundations that make democracy possible, even in a divided nation. This is no easy task. In the first chapter especially, Dusty Crary, a rancher and conservationist from the Front Range, describes how much hostility he’s stoked in his own town among those who are loath to accept help or bestow trust on outsiders, especially treehuggers or government officials, as he’s done. But he and his group try to focus most on the “80 percent that unites them rather than the 20 percent that divides,” writes Horn: They avoid engaging both with extremists and with hot-button issues. Always, the first step along the road is simple, if daunting. It involves sitting down, talking, and listening, person to person. “The best thing I’ve ever done was getting away from just my own kind…and talking with people different than me,” says Crary. “Humans are what humans are, on all sides of the spectrum, and I’ve never yet not learned more and tuned my perspective by listening to people who are polar different from me.”