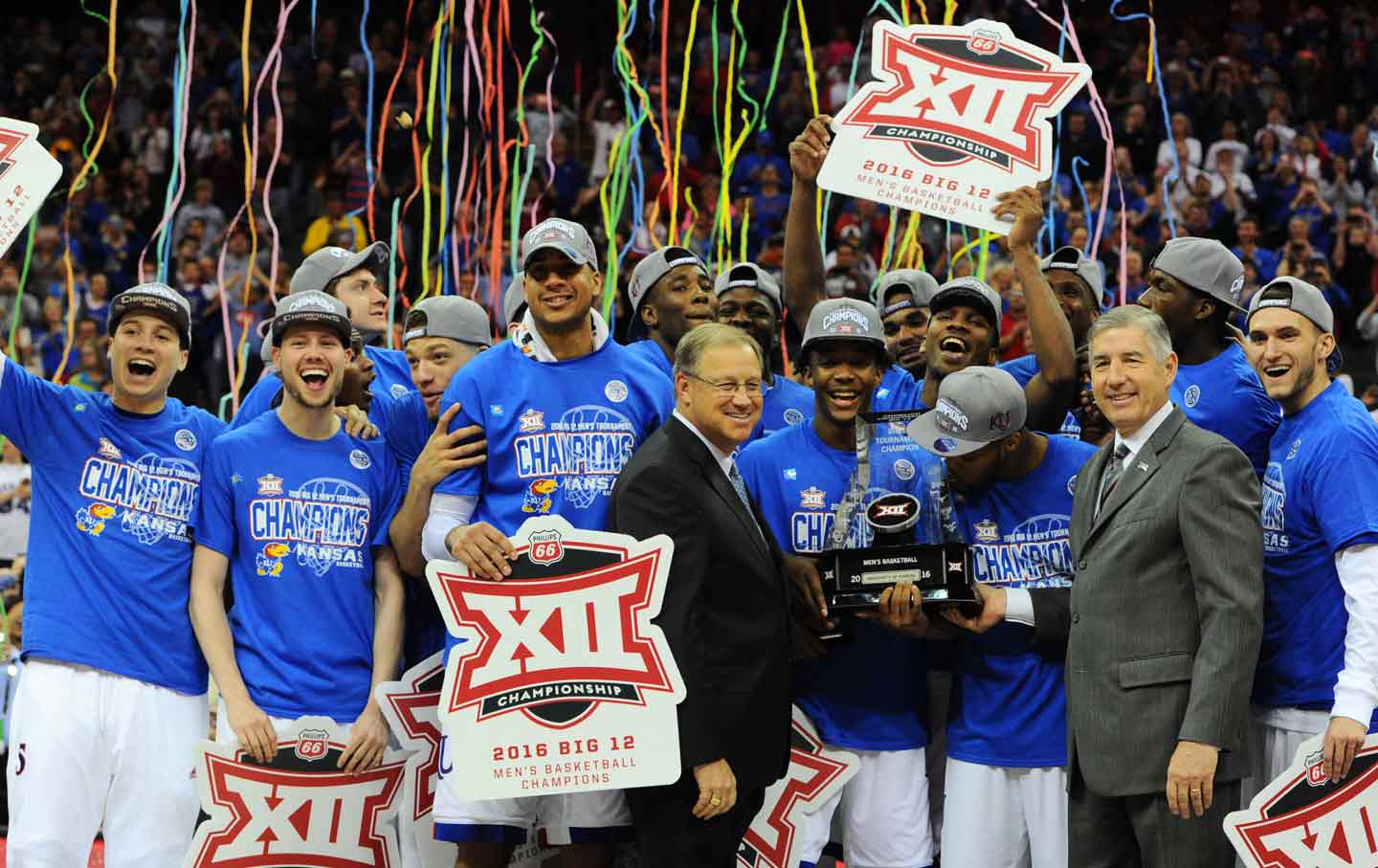 Kansas, as has become custom, is a number one seed in the NCAA tournament after a stellar 30–4 record. I had never been to Lawrence, Kansas, until last month, and traveling to the land of Rock Chalk Jayhawk was actually less of a “trip” than a pilgrimage. It is without question part of the Mount Rushmore of college basketball’s history, along with North Carolina, Kentucky, and UCLA. (Sorry, Duke. You can wait outside.)

Yet for all the legendary programs on the college hoop landscape, Kansas really does stand alone. Its first men’s coach was this guy Dr. James Naismith, who in 1891 only invented the damn sport. The current coach is Bill Self, who has won 82 percent of his games at KU, the second-highest percentage at one school in the history of college hoops, and the best since Herbert Hoover was president. There have only been six coaches in between, with names like Phog Allen, Larry Brown, and Roy Williams.

(Want a great bar trivia question? Of the mere eight coaches that have helmed the men’s team over the last century, Dr. Naismith is the only one with a losing record.)

This is also the school of Wilt Chamberlain, the most dominant player to ever walk the earth; Lynette Woodard, whose galactic ability was honed under the leadership of the legendary coach Marian Washington, and who was the first woman to play for the Harlem Globetrotters; and Danny Manning, who, for my money, ranks behind only Lew Alcindor and Bill Walton as the greatest male collegians ever to take the court. Kansas is in addition at the root of another Hall of Fame coaching tree in Chapel Hill. Lawrence was where North Carolina’s almighty Dean Smith—Kansas born—played and then worked as an assistant to Phog Allen. Hell, the town of Halstead, Kansas, is even the birthplace of the person who gave us Kentucky basketball—albeit the segregated version—coach Adolph Rupp. Given the population of the state, under 3 million people, what this institution has given the game is almost surreal.

Yet there is something else about Kansas, which I witnessed firsthand. In touring the Allen Athletic center and speaking at both a class on race and sports and an evening symposium, I saw something that I have never seen at other big-time state basketball schools: utter engagement of the athletes with the academic and campus life.

I am cynical about college sports, and this cynicism is well earned. Revenue-producing amateur athletics in this country are a cesspool of exploitation, and the NCAA lords over this flaming trash heap like an old man with a sawed-off shotgun in a rocking chair. That man in the rocking chair, its $2 million-a-year president, Mark Emmert, runs this multibillion-dollar cartel with no sense of morality or higher purpose. Far too many school administrations and athletic departments reflect this absence of a moral mission and see their task as little other than winning games and securing ever more lucrative contracts for their coaches. I’ve seen and heard too many stories of so-called student-athletes on a conveyor belt, with no one having any kind of interest in their future beyond what they can do to put the rock in the hole come March Madness.

But then I saw Kansas. The class where I spoke had basketball and football players fully engaged with the rest of the students, their books as dog-eared as anyone else’s. The evening event, where I spoke, was scheduled from 6 p.m. to 8 p.m. Practice for the men’s hoops team ended at 6, and every member of the team was in their seats, along with 500 other people, by 6:15. Keep in mind that at the time of this writing the Jayhawks were the number two basketball team in the country, and getting ready for March Madness. Professors with whom I spoke told me stories matter-of-factly about the academic work of several Jayhawks now in the NBA. They are still in contact with their academic advisers, still taking steps toward their degree. One player—whose anonymity I will protect—was even having his advisers fly out to the team to advise him on his thesis and assist him with field interviews.

I know schools where the NBA-caliber players don’t know their professors and that antipathy is shared. Or if the profs do know the players, they are so busy covering up for them, and enjoying the whiff of the jock, they don’t care about actually making sure they are doing the work. But here, I was able to walk through the athletic academic center and see serious engagement across the board. I also met several former players, like former Big 12 Player of the Year and NBA first round draft pick Wayne Simien and star guard Aaron Miles, who have returned to Lawrence to live.

Professors with whom I spoke, even the “burn the NCAA to the ground and pay the damn players like the employees that they are” professors, were proud of what their school has been able to do and have an ethical direction in an amoral landscape. They should be proud. But, with all respect, that’s also not enough. As the saying goes, with great power comes great responsibility, and Kansas has a responsibility not only to feel content about what it is doing in Lawrence but to challenge the NCAA to fundamentally reform. It’s one of only a few places with the history and the cultural capital to push the needle on that kind of change. In the name of James Naismith, Dean Smith, and Danny Manning, the school needs to be seen very openly and very publicly as an institution trying to get so-called student-athletes a seat at the table, so the system can be fixed and everyone benefits: not just the cartel known as the NCAA. That’s real leadership, and one would be hard-pressed to think of a major institution other than Kansas that has the credibility to stand up to the NCAA and be heard.