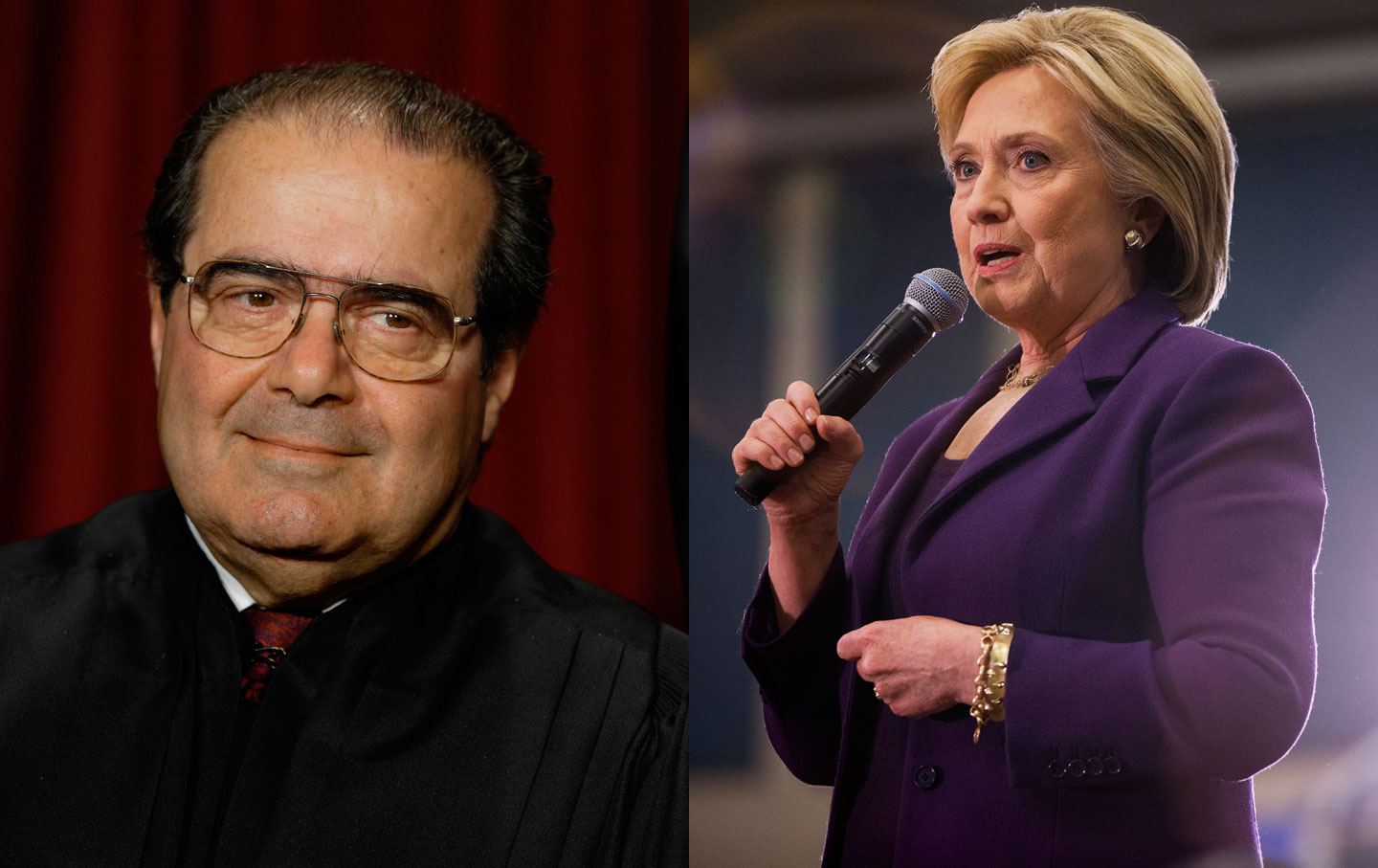 The death of Justice Scalia gives new life to the troubled candidacy of Hillary Clinton. She now has a cause and forward-looking issues that can invigorate her chance of actually winning the presidency. If average Americans don’t yet grasp the meaning, we can count on the Republicans to drive home the message with their raw unconstitutional obstruction of democratic order.

The more vicious the GOP becomes in trying to block President Obama’s nominee, the more ammunition Democrats will have to rally voters. Not just angry Democrats but also independent voters disgusted with Mitch McConnell’s blatant crime against democracy. Where are those right-wing corporate lawyers at the Federalist Society who always insist on the “original meaning” of the Constitution when it serves their wealthy clients and upholds retrograde social prejudices?

Bernie Sanders has said it repeatedly during his underdog campaign: When voter turnout is high, the Democrats win. When turnout is weak, Republicans usually win. The country now has the basis for a truly energized electorate on the left and a list of vital issues for liberal-progressive constituencies to defend.

Meanwhile, Republicans are stuck in the past—promising to take us backwards on racial justice, income inequality, climate change, corporate greed and power, and social values of tolerance and fairness. The right-wing Supreme Court majority has been pulling the country in the wrong direction on all those and more. The timely death of Scalia, a snide and bitter reactionary himself, brightens the future for the country.

Up until now, the conversation among Democrats fed up with Clinton’s weak campaign always turned on the question of filling future Supreme Court vacancies. Anyone thinking of voting for Bernie was scolded, told the Sanders candidacy was too risky. We have to elect Hillary, it was said, because at least she would be sure to fill empty chairs with progressives.

Some Clintonite stooges even suggested that the brilliant Justice Ruth Bader Ginsberg—a k a the “notorious RBG”—should retire right now so President Obama could name her replacement. She declined the invitation.

Now the Clinton campaign has a genuine opportunity to change its own backward focus. Instead of slamming Bernie’s forward-looking agenda, she could borrow some of his brilliant thunder. Instead of cheesy slurs about his vision, she should drop the practicality argument and say instead that neither Bernie’s agenda nor hers can survive if the right wing owns the Supreme Court.

But would people believe her? So far HRC has chosen an opposite strategy. Sanders is is portrayed as a hapless dreamer and she plays the realist. Bernie talks big solutions, while Hillary reminds people of how very difficult it is to change things. Hey, people already know that, don’t they? The campaign to date has put hope versus turgid skepticism.

Clinton dwells in the world of policy-making and sophisticated inside baseball, the realm where she is certifiably far more experienced that Sanders (which he acknowledges). But Bernie is coming from anther direction—from the common struggles and disappointments in people’s lives to the governing elites that have failed to help. That experience is what explains their frustration.

In these circumstances, people need to hear both some new dreams and a plausible claim that something better is possible. Casting Bernie as an addled old crank only adds to the anger. Will Clinton catch up with the new zeitgeist and embrace it joyfully? Or will she continue to react slowly and grumpily?

To change course, she will have to set aside her own deep knowledge of the policy-making realm and “get down” with the folks. She would also need to dump the Clinton brand and turn her squads of New Democrat policy wonks and wordsmiths out to pasture. And she might leave Bill at home. The Clinton era is over, the Obama era soon will be too. Her family hugs on stage with the silver-haired ex-president may stir nostalgia for aging boomers now signing up for Medicare, but also provoke some ignoble memories.

Anyway, the Clinton-Sanders policy differences are hung up on a more poisonous question: Can people trust her? Hillary has not found a way to acknowledge this disability, since it would require her to talk candidly about the New Democrat era of compromise and retreat from the Democratic party’s old values. Pretending that these blemishes do not exist is a losing strategy.

A few days before the New Hampshire primary, Bernie Sanders sent a provocative tweet: “I urge Sec. Clinton to join me in saying loudly and clearly that we will never cut Social Security.”

Hillary Clinton got the message, tweeting: “I won’t cut Social Security. As always I will expand it. Enough false innuendos.”

The activists at Social Security Works who had been bugging her to make this promise declared “victory.”

The exchange did nothing to avert Sanders’s blow-out victory with the primary voters of the Granite State. But this digital exchange between the candidates is shorthand for the political contest that has been unfolding between them. Hillary was offended that anyone would question her loyalty to Social Security and the party’s sacred accomplishments. But she knows why. Her husband, as president, secretly negotiated a “reform” plan with Newt Gingrich that to cut the system. What stopped their scheme was the Monica Lewinsky sex scandal. Gingrich decided to impeach Bill Clinton instead of collaborating with him.

Barack Obama flirted with the same objective but also failed. He appointed a “presidential commission” to propose so-called “entitlement reform” that was notoriously chaired by two conservative opponents of the popular program. Their proposal was finally abandoned when Obama discovered he would never get the votes to enact it.

Given this history, the activists of Social Security Works were determined to smoke out Hillary Clinton’s intentions. And get it in writing. They are still pestering her to endorse the broader reform proposal to increase benefits for all Social Security recipients and pay for this by increasing the FICA contributions from well-off incomes over $250,000. Senator Sanders has previously introduced a bill to accomplish this.

The death of Scalia, we might say, is an opportunity for Clinton. If she plays her cards right, she can pick up more support from a reinvigorated base, angry at GOP obstruction on Scalia’s replacement. But that won’t work if she continues to claim that Bernie’s ideas are unachievable—essentially a negative agenda (don’t try this, we can’t pay for that). The political establishment’s usual knock on big new ideas is “impractical” or “too costly.” But voters won’t punish Hillary Clinton if she borrows (or steals) some of what excites them about Bernie. In fact, they might otherwise punish her for being stuck in the past.