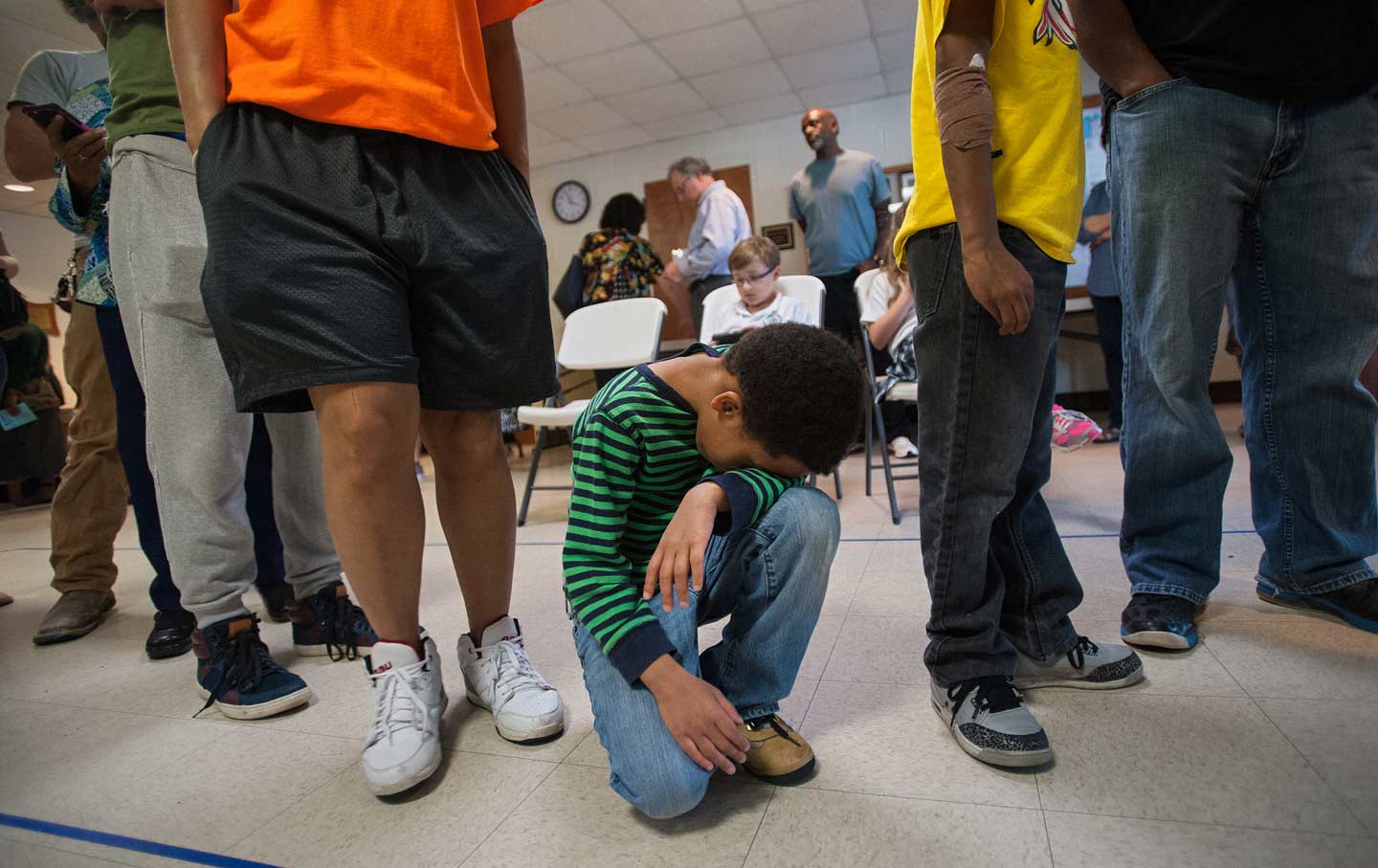 Brandon Lee, 7, waits in line with his family as they prepare to vote at Hope Valley Baptist Church in Durham, North Carolina, on Tuesday, March 15, 2016. (The Herald-Sun via AP / Kaitlin McKeown)

The five-hour lines to vote in Phoenix’s Maricopa County on March 22 have become the prime example of election dysfunction in the 2016 primary.

But a week before the debacle in Arizona, there were widespread problems at the polls in North Carolina, which has become ground zero in the fight for voting rights. Voters faced new barriers in these states because the Supreme Court gutted the Voting Rights Act and allowed jurisdictions with a long history of voting discrimination to implement new voting restrictions without federal approval.

On March 15, Alberta Currie, an 82-year-old African-American woman, went to vote with her daughter in North Carolina’s presidential primary. Currie, a great-granddaughter of a slave, first voted in 1956, when white voters were allowed to cut in front of black voters in line and many eligible black voters couldn’t vote at all.

North Carolina’s new voter-ID law was in place for the first time and 218,000 registered voters, who are disproportionately African-American, lacked an acceptable form of government-issued ID required to vote. Currie was one of them. She no longer drives and only has an expired license from Virginia. She cannot get a state photo ID in North Carolina because she was born at home to a midwife in the segregated South and never had a birth certificate. She is the lead plaintiff in a legal challenge to the state’s voter-ID law, and her story of trying to cast a ballot in North Carolina shows how harmful these new voting restrictions can be.

When Currie went to the polls in Fayetteville, a poll worker said she could not vote with her expired license and would have to go back to Virginia, where she has not lived since 1994, to update her license. Her daughter, Linda Blue, who has a North Carolina driver’s license, was wrongly told that she might also not be able to vote because her mother didn’t have a valid ID.

Blue called her mother’s lawyer, who said that Currie should be able to cast a provisional ballot because she had a “reasonable impediment” to obtaining a voter ID. The poll worker told Blue that she doubted her mother’s provisional ballot would be counted. Another poll worker said that Currie was not a registered voter, even though she’s been voting in Cumberland County since 2004, most recently in 2014.

After spending an hour arguing with the poll workers, Blue voted, but her mother did not. Jaclyn Maffetore of the Southern Coalition for Social Justice drove 90 miles from Raleigh to assist Currie. Currie returned to her polling place four hours later to try a second time to vote. Once again, the poll workers told her she was not a registered voter. Maffetore printed out a copy of Currie’s voting record and demanded she be offered a reasonable-impediment ballot. The poll workers finally relented and allowed Currie to cast a provisional ballot by stating her birth date, the last four digits of her Social Security number, and why she did not have a voter ID.

“If she hadn’t had a lawyer’s advice and someone willing to drive three hours round trip to advocate for her, she would not have been able to vote,” said Allison Riggs of the Southern Coalition for Social Justice.

“We had a terrible experience trying to help my mother vote,” Blue said. “This is really a slap in the face for her.”

The voter-ID law also led to longer lines at the polls, because poll workers had to check strict ID for the first time and those without voter ID were forced to cast provisional ballots.

Lines stretched for two, three, and four hours in cities like Charlotte, Durham, Raleigh, and Winston-Salem. The last voters cast ballots in Charlotte and Durham at 11 pm, three and a half hours after polls closed. Many of these polling sites were frequented by students, who voted overwhelmingly Democratic. (During early voting, four of the five counties with the highest number of provisional ballots were in places with college campuses.)

At a precinct in Raleigh at Pullen Park, where many N.C. State students vote, the university bused students in every 15 minutes, and more than 1,700 people voted there on Tuesday. By 7 p.m., a line of hundreds of people stretched into the parking lot. Polls had been scheduled to close at 7:30 p.m.

Some left the polls without voting because of the long lines. Andrew Pryor, a 30-year-old software engineer, moved to North Carolina from Pennsylvania and bought a house in Durham this year. When he swung by Durham’s Precinct 44 during his lunch break at work, there were 50 to 75 people in line and he decided to come back later. When he returned at 4:15 the line had doubled. He tried a third time at 6:15, but by then there were over 300 people in line, reaching outside the parking lot, with cars parking a quarter of a mile away.

“I should have voted early, but I just bought a house in that precinct and had been working on it [and] never expected the lines to be that bad,” Pryor told me. “In Pennsylvania, where we are originally from, I never had any issues with lines or waits for us to vote.”

Minority voters also faced racial profiling at the polls. Rudy Ravindra, a 66-year-old retired scientist from India who became a US citizen in 1992, faced a “spelling test” when he and his wife voted in Wilmington.

I gave my driver’s license to a poll worker, HW. He kept it face down and ordered me to spell my name.

Although I go by Rudy, my legal name is Rudravajhala. In order to save time, I requested HW look at my ID. He barked, “You gotta spell it!”

Since my wife was out of town last week, I drove her to the designated polling place (not the same place I voted) on Election Day. This time poll worker NX subjected my wife to a similar ritual. Keeping her ID face down, he asked her to spell her name and pronounce it.

Our two Caucasian friends who live in different areas of town voted at different polling places. In contrast to our humiliating experience, however, they did not have to pass the spelling test and after a cursory glance at their IDs were allowed to vote.

“This was just a primary,” Riggs says. “All hell is going to break loose in the general election.”