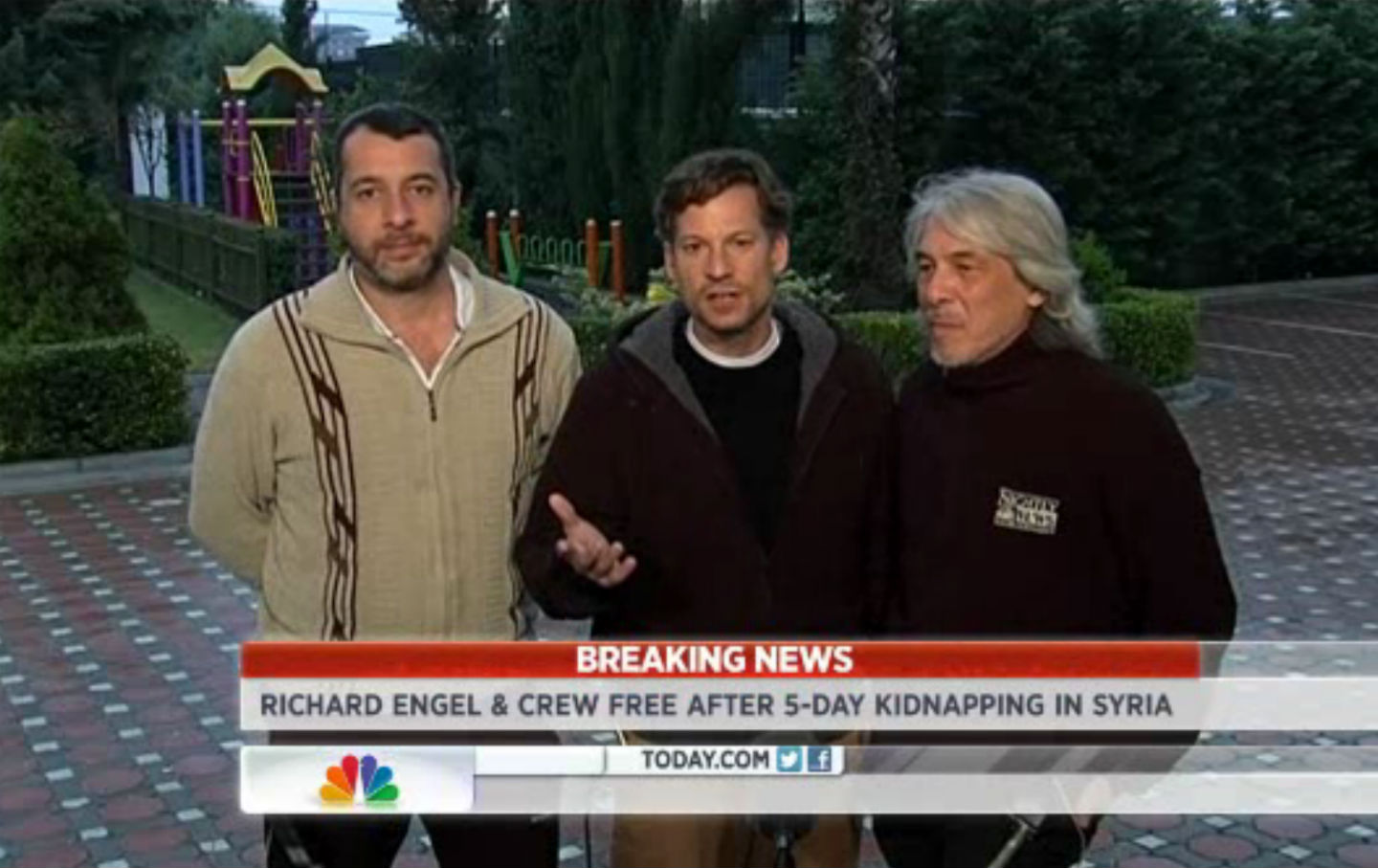 NBC's Richard Engel and his team appear on The Today Show on December 18, 2012, hours after their release. (NBC News)

An NBC News journalist is involved in a harrowing scene of battlefield danger. The journalist’s first-person story serves as the dominant narrative for years—but it turns out to be wrong, very wrong. Sound familiar? This isn’t the Brian Williams scandal. It’s worse: the story of the December 2012 kidnapping and rescue of Richard Engel, NBC’s chief foreign correspondent, in Syria.

The prevailing narrative held that, as Engel reported immediately after he was freed, a group of Shia militiamen loyal to Basher Assad’s embattled government had kidnapped and mistreated the star reporter and his colleagues. Engel pointed to the language his captors used and other pronounced signs of their allegiances, ranging from graffiti scrawled on the wall of their prison to the coffee cups they drank from.

But the narrative was false, a set-up by a Sunni rebel group opposing Assad. That much became clear on Wednesday night, when NBC quietly posted a piece to its website where Engel corrected the record. “The group that kidnapped us was Sunni, not Shia,” Engel wrote. Curiously, the piece is posited as producing “new details” about the attack, not as a correction; there was no retraction of or apology for earlier errors in reporting, as is customary.

Far from answering all the questions about the episode, Engel’s update piece did not give a full accounting of the story from NBC’s perspective. Those gaps were filled, in part, by a subsequent report in The New York Times. The resulting picture looks very bad for NBC, in many ways worse than Brian Williams’s fall from grace due to self-aggrandizement of his now-infamous helicopter incident in Iraq. This was war propaganda spread by NBC, a respected institution in American news. And if the Times’s account is to be believed, the network let the false story stand for years knowing full well that it was at least questionable, if not entirely false.

In Engel’s clarification of his original version story, he wrote:

About a month ago, we were contacted by The New York Times. The newspaper had uncovered information that suggested the kidnappers were not who they said they were and that the Syrian rebels who rescued us had a relationship with the kidnappers.

But in the Times story that subsequently hit the Internet, some part of NBC’s operation was well aware of the doubts over the culpability of pro-Assad forces (with my emphasis):

NBC executives were informed of [known Sunni rebels’] possible involvement during and after Mr. Engels’s captivity, according to current and former NBC employees and others who helped search for Mr. Engel, including political activists and security professionals.

Engel explained in his update piece that the “group that kidnapped us put on an elaborate ruse to convince us they were Shiite Shabiha militiamen.” That may be so, and one can hardly blame Engel, amid and immediately following his ordeal, for falling for such a ruse and reporting what he believed to be the facts upon his release. As any conflict correspondent can tell you, the fog of war is very real for journalists working in war zones, and discerning the truth can be difficult.

What’s difficult to fathom is how NBC executives who had this information allowed Engel’s report to air without immediately getting on the phone to demand that the story be walked back. Such a move would only have been appropriate considering the information that they had themselves gathered (detailed by the Times) and, as Glenn Greenwald pointed out yesterday, the fact that at least two prominent voices—the popular blogger As’ad AbuKhalil and the Daily Beast’s Jamie Dettmer—had cast serious doubt on the involvement of pro-Assad militias.

Why is this so much more serious than the Brian Williams scandal? At stake in l’affaire Williams was merely the reputation of a veteran journalist—Williams himself—and not decisions of war and peace for the United States. In the Engel saga, the aim of the rebels who kidnapped his crew clearly became to demonize the Assad regime (an aim, it bears mentioning, whose realization hardly requires spreading falsehoods) with the goal of goading the West into military intervention against Assad.

This is exactly what other rebel commanders, once they became aware of the kidnapping, hoped to accomplish, according to the Times: “Several rebels and others with detailed knowledge of the episode said that the safe release of NBC’s team was staged after consultation with rebel leaders when it became clear that holding them might imperil the rebel efforts to court Western support.” (Engel, too, acknowledged this: “it is clear we were…released for propaganda purposes,” he wrote.)

Engel noted in his piece last night that the new account “underscore[s] the treacherous and violent nature of the conflict inside Syria.” It’s a shame that whichever NBC executives were aware of the (ultimately true) counter-narrative chose to do nothing to revise the original story quickly, instead opting to shield their viewers from this picture, even at a time when more robust military support for the so-called Free Syrian Army was being hotly debated in the United States.

NBC News’s failure to quickly correct the record made the network into a willing conduit for pro-war propaganda by a murky coalition of Syrian rebel groups. (And let me repeat that the executives who apparently failed to impose a course correction despite the information they had acquired, rather than the correspondent and team on the ground, deserve the blame.)

“An NBC News spokesman said the network would have no comment beyond the statement posted on its site,” reported the Times. That’s a shame, too, because there are still plenty of questions NBC News’s audience deserves answers to.