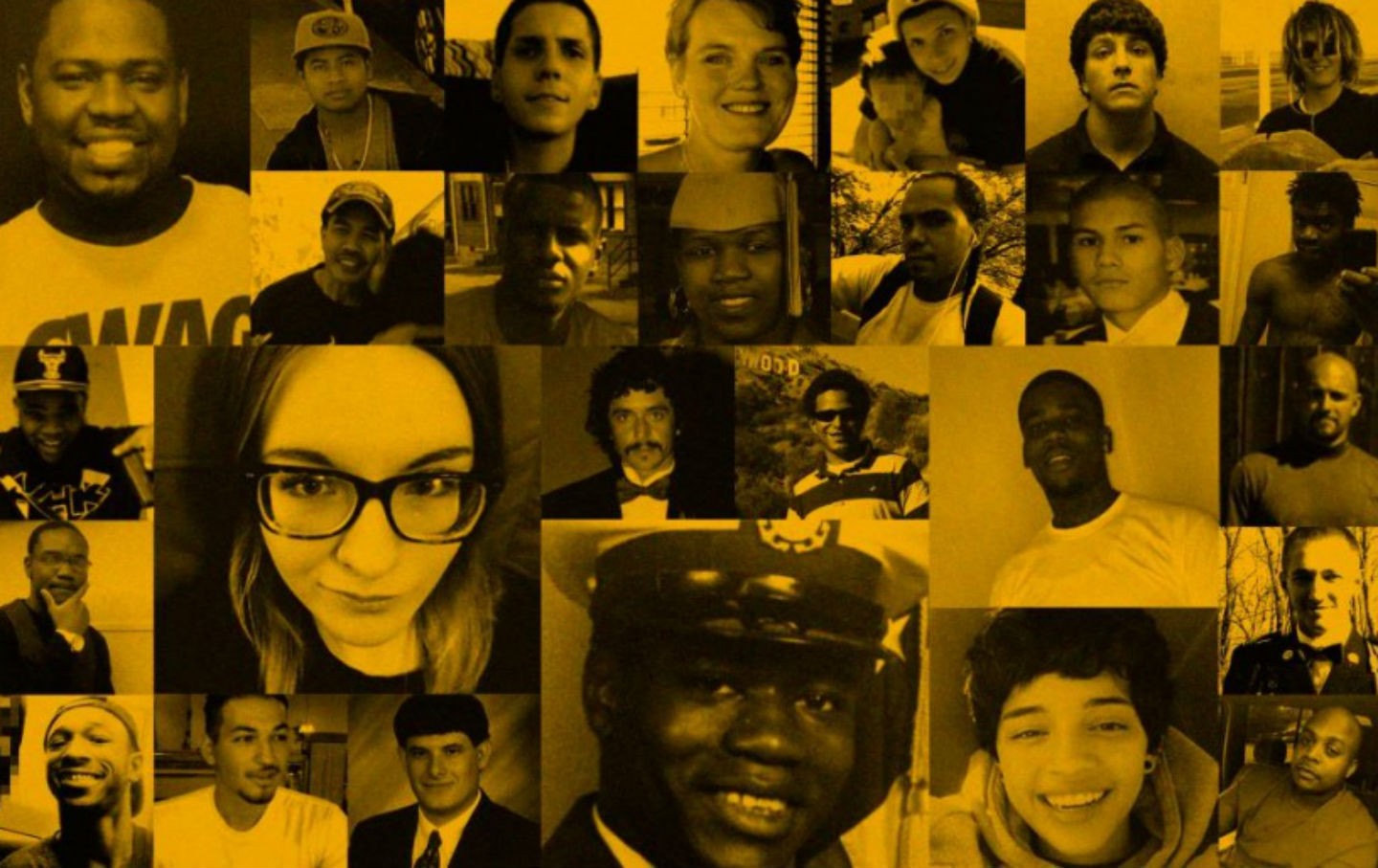 "The Counted": People killed by police in the United States. (Photo courtesy of The Guardian US)

Amazingly, although people are killed by police virtually every day in the United States, there is no government agency, no bureaucracy, and no database that counts them all. Nor is there any national prayer wall or shrine where images of the dead and their stories are collected in an effort to portray them as individuals.

Last week, almost simultaneously, The Washington Post and The Guardian US unveiled large-scale journalistic projects that tried to supply a comprehensive, independent accounting of citizens killed by police since the beginning of this year. Same story, similar journalistic standards. So far, The Guardian story, with its interactive database linking to photos and stories of the dead, has come closest to filling the shameful gap.

In what Lee Glendinning, the new editor of The Guardian US, called “the most comprehensive public accounting of deadly force in the US,” the site launched “The Counted,” an interactive database of those killed by police since January 1 that includes the names, locations, background, race, means of death—along with, when possible, photos and stories of the dead.

Combining traditional reporting and “verified crowd sourcing,” Glendinning said the idea was to “build on the work on databases already out there,” most of which, she said, “are largely numbers and statistics. We wanted to build on these by telling the stories of these people’s lives, over a whole year, every day, and update them every day.”

Most Americans probably assume that some agency keeps track of the people who have been killed by police, but no such authoritative clearinghouse exists. There are partial counts by various bureaucracies, as well as by organizations like KilledByPolice.net and FatalEncounters.org, but none are complete.

“You could tell me how many people, the absolute number, bought a book on Amazon,” FBI director James Comey himself complained in a speech last month. “It’s ridiculous, I can’t tell you how many people were shot by police in this country last week, last year, the last decade.”

Some of the difficulties in keeping count are due to the reluctance of local police departments to file reports when they kill someone. But, as Tom McCarthy wrote at The Guardian, “The structural and technical challenges to compiling uniform data from the 18,000-plus local law enforcement agencies in the US far exceeds the reporting problem, in some cases.”

Without a true count, there is even less accountability. “A counting is a prerequisite,” Glendinning said, for any kind of “informed public debate about the severity of the problem.”

The Guardian didn’t attempt to determine whether the deaths were justified or unjustified. But they did find some disturbing trends and alarming sloppiness:

A day before the Guardian story broke, The Washington Post came out with similar trends and numbers based on its own in-depth investigation of police-caused fatalities. (“We knew they were working on something, and they knew we were,” Glendinning said, but she believes the timing is coincidence.) One big difference between the two projects is that the Post limits its data to death by police shootings, which, it found, have amounted to 385 so far this year. The Guardian’s 464 police-caused deaths in the same period, however, also include those by Taser (27), vehicle, and other means. Hence, Eric Garner’s death while the NYPD held him in a chokehold wouldn’t be included in the Post tally. (Mother Jones compares some of the two publications’ findings here.)

It was probably the one-two punch of the Post and Guardian investigations that led to an uncharacteristically quick political response. Within 48 hours after the pieces appeared, senators Cory Booker and Barbara Boxer proposed a plan to “force all American law enforcement agencies to report killings by their officers” to the Department of Justice.

Another difference between the two projects is that, while both will collect data through the end of the year, the Post’s database—and any photos, stories and interactive bells and whistles that might accompany it—won’t go public, it said, until “a future date.”

And so in terms of emotional impact, The Guardian has the jump. In fact, “The Counted” reminds me of the Pulitzer Prize–winning New York Times project, “Portraits of Grief,” which ran more than 1,800 capsule biographies, with photos when possible, of those killed on 9/11. “Portraits” was a daily feature, filling one full page, sometimes two, and ran through New Year’s Eve 2001. Like today’s police killings projects, “Portraits” began, the Times wrote, “as an imperfect answer to a journalistic problem, the absence of a definitive list of the dead…”

The portraits, now archived online, were based on a phalanx of reporters’ interviews with families and friends of the dead, and gave more personal snapshots (like “Taking Care of Mozard: Maria Isabel Ramirez”) than either the Post or Guardian have the resources to muster today.

The Guardian stories are presented almost Facebook-style in a photo mosaic of faces. You could find yourself, as I did, clicking on faces to see whether they fit or explode the stereotypes you might have of someone who would be killed by the cops, all the time overwhelmed at the scale of the problem.

Beyond the database, The Guardian is running almost-daily features on how police violence affects various communities, including deaths of the mentally ill, women, Latinos, and the elderly (“about six elderly people a month,” it finds).