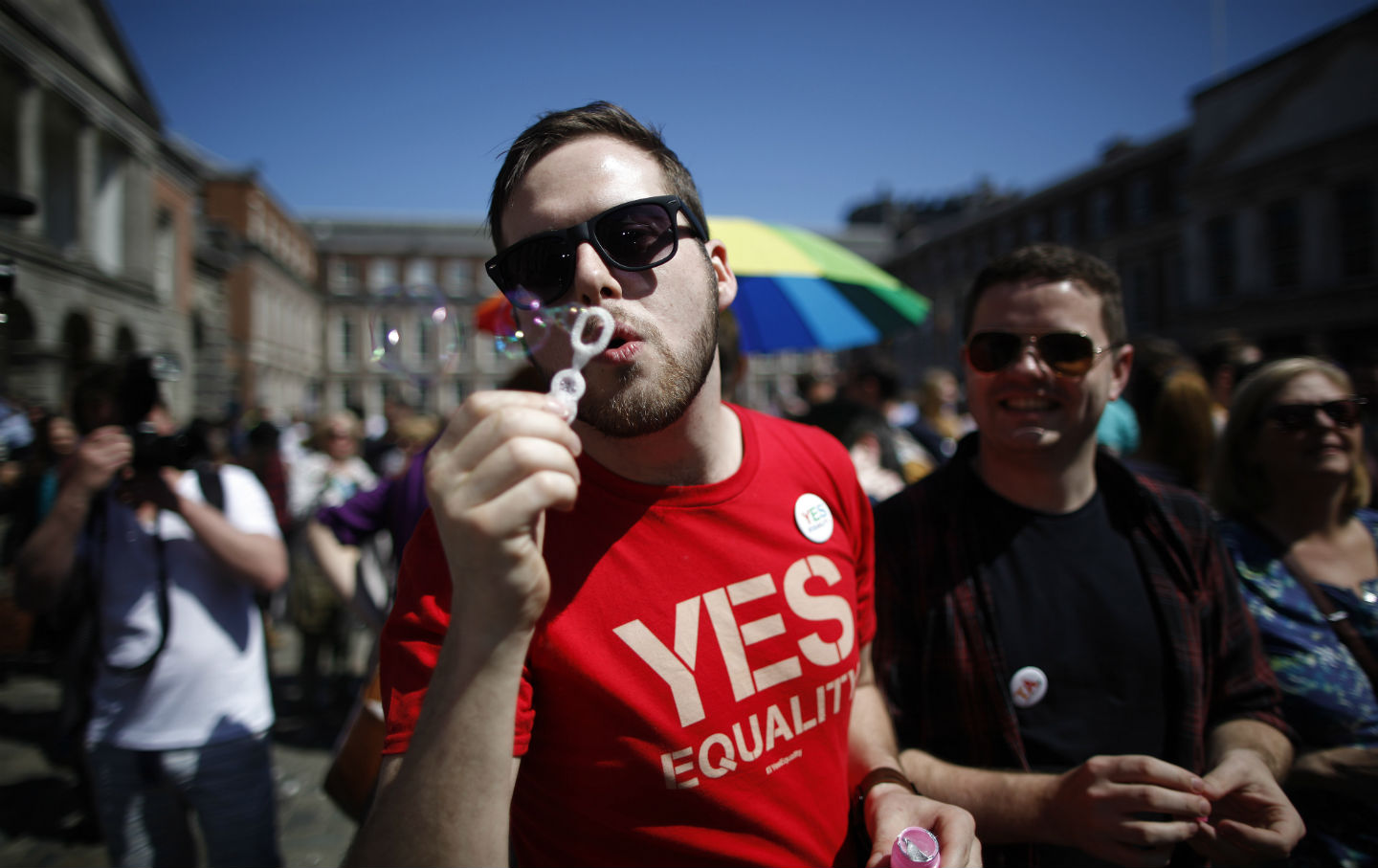 The night after Ireland’s vote counters announced the victory, by a nearly 2-1 margin, of a constitutional amendment establishing marriage equality, my daughter and her partner left their Dublin flat to party in the streets with other ecstatic Yes voters—thousands of lifelong residents alongside throngs of economic émigrés who had flocked back to their birthplace from London or Los Angeles or Seoul or Sydney as part of the unprecedented #HomeToVote campaign. My daughter found herself next to a man so overcome with emotion that he was unable to snap a picture of the occasion. He welcomed her offer to photograph him against the exhilarating backdrop, but couldn’t stop his tears.

Ireland’s vote is momentous and should be an occasion for worldwide joy. “I wanted to be an equal citizen in my own country and today I am,” exulted Leo Varadkar, minister for health and the country’s first openly gay cabinet member. Conventional wisdom holds that great gains in minority civil rights get imposed from above—from judges, from legislators, by executive order. Even Senator David Norris, so long a warrior for gender equality that he used to be called “the only gay man in Ireland,” admitted that until recently he had assumed justice for his country’s LGBT community would have to come through the courts. Yet here were the people of Ireland, by an overwhelming majority, enshrining marriage equality in the national charter, leaping past the other social democracies of Western Europe and the still ruminating US Supreme Court. How Ireland got here—how this small country, in barely a generation, shook off the tangled legacies of Britain’s colonial sodomy laws and Rome’s theocratic stigma to emerge on this sunny Saturday, with rainbows marking the sky, as the world standard-bearer for gay rights—is worth both contemplation and celebration.

The huge Yes vote debunked the conventional dichotomies that even leftists use to describe the Irish public: Catholic versus non-Catholic, youth versus the old, rural versus urban. Quite the contrary: This triumph owes a great deal to an unofficial coalition of LGBT activists, millennials, the elderly, those overseas citizens who returned home, and members of the clergy—as well as to citizens in none of the above categories.

Take the presumption that the marriage-equality movement belonged to Ireland’s cities and cosmopolitan elite. Fact: If you wipe Dublin, Cork, and Limerick, Ireland’s three largest cities, off the electoral map, the Yes Equality margin was still prodigious—61 percent to 39 percent. The Yes Equality campaign held majorities in the most rural, tradition-bound constituencies in the West—Mayo, Donegal, Kerry—counties with typically older and more conservative populations. And in Roscommon–South Leitrim—the single constituency in which the No campaign held a majority—a 2.8 percent swing would have sent results the other way. Many of the rural people, who it was once presumed were herded to voting booths by their pastors with instructions on how to cast their ballots, this time made plain that they voted with their minds not on the pulpit but on the lives of their own and their neighbors’ children.

As for the church itself: devout Catholics counted among the most fervent supporters of the Yes Equality vote. Sister Stanislaus Kennedy, legendary advocate for the rights of homeless persons, declared marriage equality “a civil right and a human right.” Limerick’s Father Iggy O’Donovan proclaimed the value of the Yes vote because “when we become legislators…as we do when we vote in referendums, we legislate as citizens for ALL our fellow citizens.” Tony Flannery of Athenry, suspended from the priesthood in 2012 by the Vatican for his progressive sexual politics, greeted the announcement of the Yes decision by declaring that “the day of doctrinaire Catholicism is over in this country.” Even Dublin Archbishop Diarmuid Martin, who had personally voted No, told a radio audience, “This is a social revolution.… The church needs to do a reality check.”

Leading this transformation were Ireland’s young voters. Today’s Irish under-35’s were children when the fiercely eloquent law professor Mary Robinson became Ireland’s first female president only a few years after she had argued David Norris’s case before the European Court of Human Rights, winning the decriminalization of homosexuality in Ireland. The Irish millennials’ childhood was a time when leaders of the lesbian and gay communities were invited to President Robinson’s official residence, and when Norris went from criminal status to a Senate seat. Many of these millennials would have been taken to visit their country’s AIDS Memorial Quilt, on which they could see the names and images of the epidemic’s Irish victims, even as many mourners still found it difficult to voice their grief and rage. And they might have heard Robinson on television as she bore outraged witness while standing in killing fields from Central Africa to the Balkans. They would also be familiar with Robinson’s pointing out the similarities between the massive suffering and death inflicted upon colonized Ireland by the Great Hunger of the 1840s and the devastation of 1990s Somalia. These young Irish people came of age, in the words of the scholar Luke Gibbons, in “a first-world country with a third-world memory.”

The country’s 2008 economic crisis, the aftermath of multiple betrayals by political and business leaders, landed like a ballistic missile on the under-35s. Many older Irish people began sensing a connection between their increasingly outspoken children and the bold young authors of the 1916 Proclamation that sparked Ireland’s transformation from imperial outpost to sovereign state. The Proclamation announced the new republic’s revolutionary aspiration “to cherish all the children of the nation equally.” When Mary McAleese, another former president, announced her support for the marriage-equality amendment, she did so not only as an activist barrister who for forty years had striven to dismantle “the architecture of homophobia,” but as a parent of twins—one gay and one straight—who would have vastly different legal protections. One elderly man in the village of Castletownroche told a reporter that he was casting a Yes ballot because it would likely be the last vote of his life, remarking that “I want to leave Ireland better than I found it.”

Ireland remains a place of intimate, person-to-person retail politics. The country is small enough so that people know one another, even if at a remove: It’s hard to defend exclusionary policies when you see their consequences landing on a teacher’s mother or a colleague’s father or a teammate’s brother or an employee’s daughter. In the Yes Equality campaign, thousands of young people brought their families to the polls; Trinity College students organized a “Ring Your Granny” phone initiative along the lines of Sarah Silverman’s “Great Schlep” that encouraged young Jews to go to Florida and urge their grandparents to vote for Obama. Silverman’s 2008 challenge—“If you knew that visiting your grandparents could change the world, would you do it?”—seemed everywhere present in last week’s images of multigenerational strolls to the voting booths.

As Irish Times columnist Noel Whelan put it, the Yes Equality movement is “the most extensive and effective civic society campaign ever seen in Irish politics.” The country’s major political parties all found ways to support it, to gain by association, but they could neither own it nor control it. The Yes vote’s most enduring legacy may be, as writer Fintan O’Toole said of this extraordinary event, that “Ireland has redefined what it means to be an ordinary human being.”