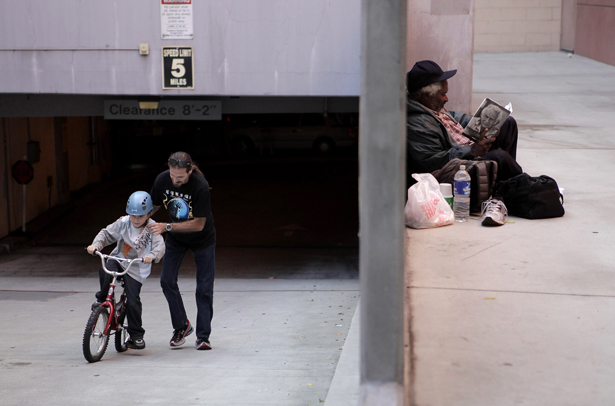 A father teaches his son how to ride a bike as a homeless man reads his book outside a Los Angeles shelter. (AP Photo/Jae C. Hong)

Economic inequality—as a political cause, as an issue of social and moral concern, as a subject of academic research—is at long last, having its moment. World leaders from President Obama to Pope Francis are giving speeches and sermons about it. Political candidates like Bill de Blasio and Elizabeth Warren have scored upset victories with campaigns that emphasized themes of economic inequality. The Democratic Party, taking its cue, is adopting economic inequality as the theme of the 2014 midterm elections. Perhaps the most intriguing recent development is that economic elites are showing distinct symptoms of unease and even panic at the country’s growing populist mood.

The timing could hardly be better for the publication this month of several important new books about economic inequality, which I plan to discuss in this space. But first, I want to write about another notable book on the subject that was published toward the tail end of 2013. The Killing Fields of Inequality (Polity) is by the eminent Swedish sociologist Göran Therborn (author of What Does the Ruling Class Do When It Rules? and other classic works). Comprising just 185 pages, it’s a short book that packs a powerful punch.

Therborn’s book is a panoramic survey of inequality across the globe in its various dimensions: theoretical, historical, empirical. Like other recent works, Killing Fields looks at the causes of the dizzying rise in economic inequality we’ve seen in recent decades in most of the developed world. But its greatest strength lies in the succinct but compelling answers it provides to three of the most important inequality-related questions. First: what, exactly, do we mean by “inequality”? Second, what is inequality doing to us? And finally, why should we care about it?

First, let’s deal with the “what do we mean by inequality?” question. Therborn finds the definition of equality developed by economist Amartya Sen to be most helpful. Equality, according to Sen, is “equality of capability to function fully as a human being. Such a capability clearly entails survival, health (and aids for disability), freedom and knowledge (education) to choose one’s life-path, and resources to pursue it.”

The most eye-opening, and disturbing, passages of the book are those that concern “vital inequality,” or the impact of inequality on life and health. This is where the “killing fields” of the title comes in. “Inequality kills,” states Therborn in the book’s first sentence. Consider these statistics:

§ The life expectancy between the richest and poorest neighborhoods in Glasgow, a difference of twenty-eight years, is the same as that between the UK and Haiti.

§ The UK’s famous Whitehall studies indicate that the odds of poor health and premature death increased as the employee’s status in the civil service bureaucracy decreased—even controlling for use of alcohol, tobacco and other factors.

§ The restoration of capitalism to the former Soviet Union is associated with a stunning 4 million excess deaths there.

§ A number of studies show that unemployment is associated with a significant number of excess deaths, even when controlling for other health indicators.

Those examples and many others that Therborn cites, which make “the correlation between hierarchy and death” all too clear, are harrowing. (Therborn wields a masterful command of an array of fascinating statistcs). Yet high inequality societies are far from inevitable. Therborn argues that “capitalism and capitalists can, under certain circumstances, be taught how to behave.” Income inequality in the Nordic countries in the early 1980s was about the same as it was in the Communist bloc. Egalitarianism, he claims, continues to hold a powerful appeal, and there are at least three major reasons why high levels of economic inequality tend to be deeply troubling to many people.

First, Therborn notes, there is the illegitimacy of today’s rentier capitalism. Many among the one percent derive their wealth “not from hard productive work, thrift and honest exchange, but from connections—parental and/or political—from gambling and from sidestepping existing norms and regulations.” Secondly, he says, the “positive lure” of egalitarian, enlightened societies “where nobody is outcast or humiliated, and where everybody has a chance to develop his/her capabilities.” Finally, there is what he calls “the social cost of other people’s misery”:

Without support from any representative-sample surveys, I would venture the proposition that most middle-class Kolkatans, Cairenes, Kinois, Angelenos, or Paulistas would prefer to walk (or drive) the cities or, say, Paris or Stockholm, where they will not get confronted with abject misery, where streets and public spaces are clean—not because the miserable have been chased away, but because society itself is cleaned of abject misery. Most middle-class people are likely to be happier without walled-in seclusion, barbed wire and armed body guards, without whom the happy middle classes of Northwestern Europe are living.

Therborn has a gift for crafting paragraphs like the one above, capable of awakening the reader like a jolt. And so, upon reading that passage, I reflected upon how much abject human misery I take for granted every time I step outside my apartment for a cup of coffee—the obstacle course of panhandlers I dodge, the dazed-looked homeless woman with the shopping cart whose gaze I avoid. Yet, just blocks away from this terrible human suffering loom the gleaming offices of the highest-paid university president in the land (the University of Chicago’s Robert Zimmer pocketed $3.4 million in 2011, the year for which the most recent figures are available).

Therborn’s elegant, eloquent book is perhaps most valuable in the way it forces us to take a fresh look at the social order around us and its mounting and appalling human costs. He closes the book with these sentences:

The battle is about to start. Nobody knows how it will end. Which side will you be on?