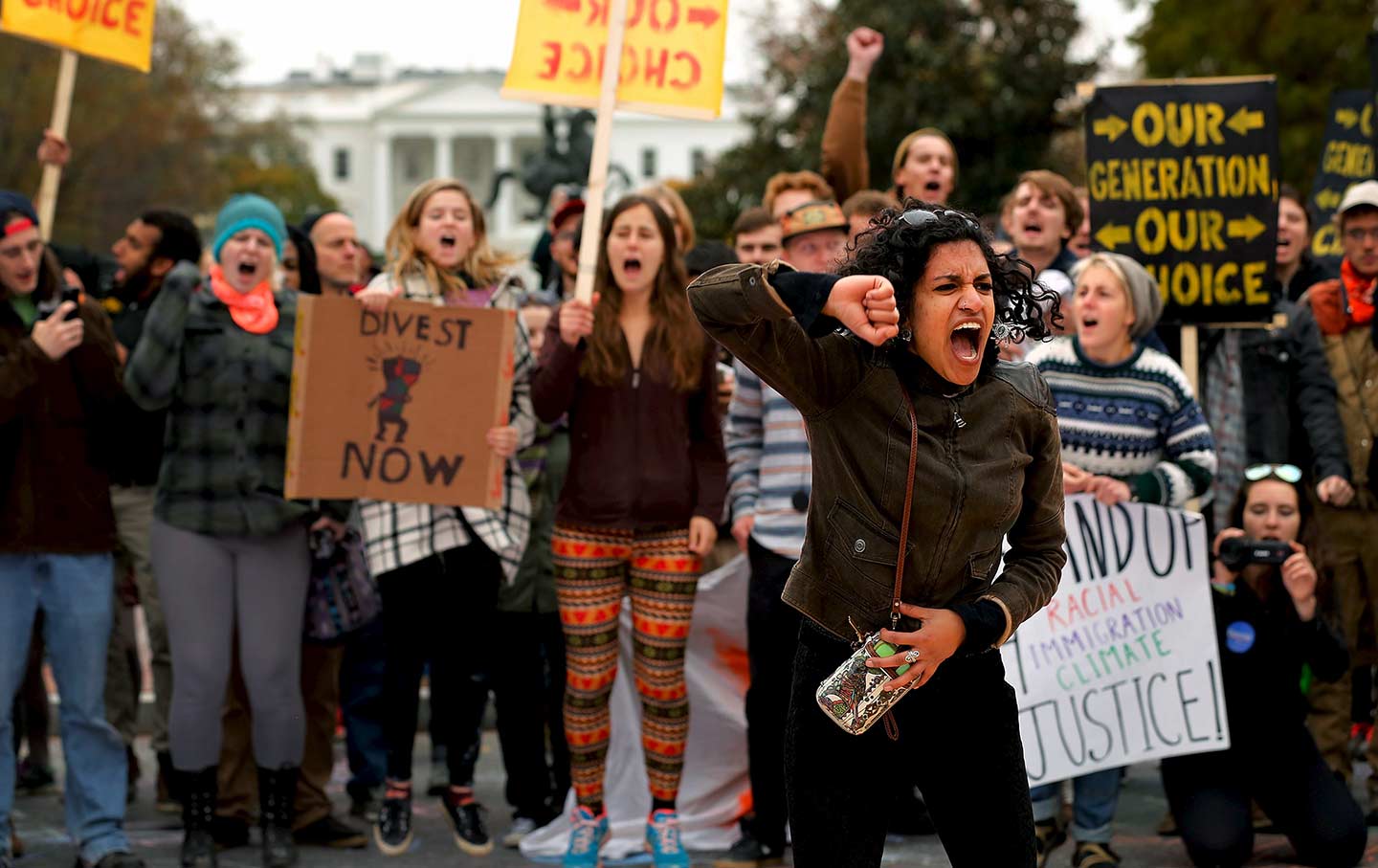 How do we survive?

As the final hours of COP21 unfolded in December 2015, I witnessed my youth delegation – the single most talented, passionate group of people I have ever met – deteriorate to the point of implosion. As youth, we struggled to find ways to hold the US government accountable for the Paris Agreement – an incomplete, non-binding, wholly insufficient text.1

Tensions rose as we took out our sense of helplessness on each other. I still remember my despair in that moment, feeling trapped in that hostel. I remember how the dimmed hallways reeked from our three sleepless weeks there.2

Of all living generations, mine is the one upon which climate change will inflict the most suffering. We as young people do not have the luxury of quiescence. And so, I picked my heart up off the floor, held it red and beating in my hands. Finding hope became a responsibility to my future children, even though I did not know how or where to find it. It became even harder on November 8.3

How do we find hope under a Trump administration? Breathing communities.4

Community is the bedrock with every sunrise. Community holds us steady as we face destructive policies that grow exponentially by the day.5

Community anchors us in the greater vision of the world we are building. When our communities are rooted in relationships to each other, rooted in justice, and rooted in trust, we can sustain a social movement for the long haul. Being able to rely on each other is tantamount to our survival.6

I think of communities in the same way I think about Impressionist art: these paintings seemingly consist of no more than individual, short strokes. Yet, when put together, they create beauty. A movement can stop a wave, if it contains people who are bound to each other.7

It is 2,000 people in New Haven, Connecticut who show up on a cold winter night to remind the refugees in this city that they are warmly welcomed and loved here.9

It is young people across the country redoubling their efforts to divest their university endowments from fossil fuels and ExxonMobil in the face of CEO Rex Tillerson’s selection as Secretary of State.10

It is passionate defenders in the Delaware River Basin denying Trump his wish to renew fracking.11

It is Native American tribes joining forces to create the Bear’s Ears national monument in Utah.12

It is my family, who supports my vision for a better world even without knowing how much I am burdened by it.13

Those of us who find communities in established institutions – such as university campuses – must call on these very institutions to take a public stance against the Trump administration. We must assert, each and every day, that we are not living in normal times.14

My current graduate institution, the Yale School of Forestry and Environmental Studies, is such an example. While the administration emphasizes dialogue with Republicans and the fossil fuel industry, environmental justice is barely on the curriculum. As a matter of fact, there are discussions as to whether justice should be on the curriculum at all.16

At Yale, nowhere are we told as a community that justice matters as much as corporate interests. Classes on corporate consulting – with clients such as Nestle and Dow Chemical – as well as business management far outnumber classes on environmental or climate justice. Students who dare speak up in support of social justice are more often mocked than supported. Yet, this school is one that teaches and trains environmental leaders: where are our relationships to each other, our values as a community? How dare we call ourselves an environmental school without acknowledging environmental justice at the core of our purpose?17

Despite institutional inaction, however, the students and faculty are fierce. Leadership is community demanding justice and change: students organizing weekly actions against the Trump administration, revolutionary conversations among students and with faculty in hallways and offices, over food. Leadership is students creating communities that rise in spite of the university administration.18

At places like the School of Forestry and beyond, we must ask ourselves: what is our contribution to community? Where can we build deep relationships with the people alongside us?19

I have seen the ways in which breathing communities can change a movement.20

The day after the election, the atmosphere at the School of Forestry – unsurprisingly for an environmental institution – was one of widespread grief. Most were wearing black. Every greeting was accompanied by a hug. Professors offered hope to their students, although I saw more than one faculty member privately sobbing in their office.21

In a class discussion on the Flint, Michigan, lead poisoning crisis, we were silent. We spoke about what was next, where we could possibly find justice for frontline communities that are and will be harmed and uprooted in the future.22

How will we survive?23

Greg, a fellow student, said: “Now, we must be the checks and balances.”24