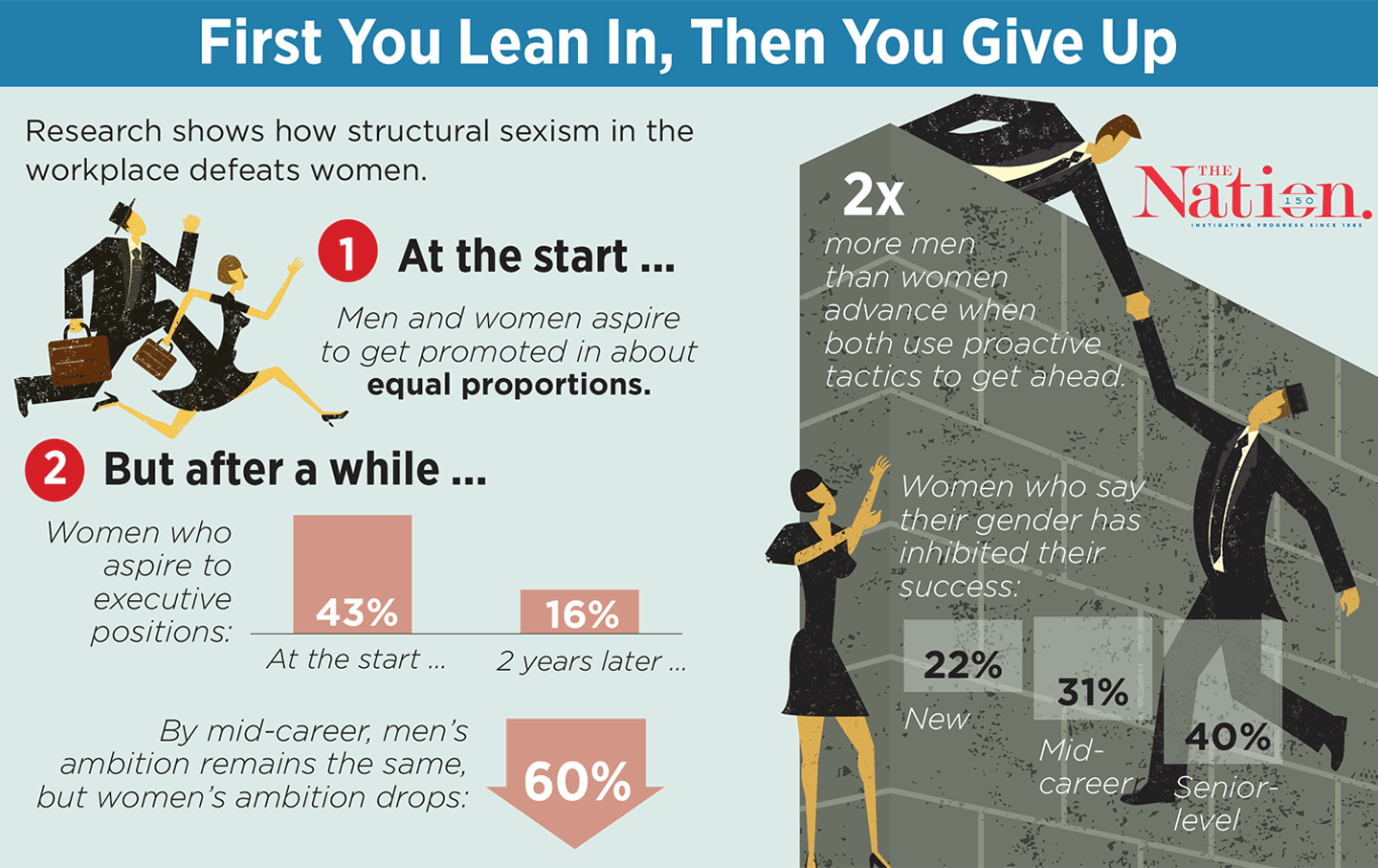 In Sheryl Sandberg’s book Lean In: Women, Work, and the Will to Lead, the Facebook executive acknowledged the structural sexism that women face in the workplace but sought to address the “barriers that exist within ourselves.” She argued that women “hold ourselves back” by becoming less professionally aggressive when, for example, they anticipate a pregnancy. Thus the title’s exhortation to “lean in” to the workplace: “We lower our own expectations of what we can achieve…. Compared to our male colleagues, fewer of us aspire to senior positions,” she wrote.

Now the Lean In organization, partnered with the consulting firm McKinsey & Company, has released a new study based on surveys of nearly 30,000 people and 118 businesses. And the findings cut against the idea that women simply don’t try as hard as men to get to the top. They start out equally hungry, but the workplace itself grinds them down.

Women are likely receiving the message that their ambition won't get them as far as their male colleagues.

The study finds that about equal numbers of men and women want to be promoted—around three-quarters of each group. Similarly, about the same share of entry-level employees, women and men, want to reach the highest possible job at their organizations. But men’s desire to get to the top intensifies as their careers pro­gress, while women’s gradually fades away.

Lean In’s findings jibe with other studies. A Bain study of 1,000 people found that more women than men just starting out in their jobs aspired to reach senior management. Over time, however, the level of women’s ambition dropped by 60 percent, while the men’s remain unchanged. It doesn’t take long, either: When first starting out, 43 percent of women aspired to get to the top; two years in, just 16 percent did.

It’s not because women aren’t trying. In a recent global study, equal numbers of men and women asked for a promotion over the last year. Among American MBA grads, roughly equal shares of women and men asked for promotions and raises.

Some might attribute this to ambitious women being derailed by career obstacles of their own choosing: pregnancy and homemaking. But Bain found no evidence that parental or marital status had anything to do with the drop-off. If that’s the case, why do more men come out on top? Women are quick to say that their workplaces are biased against them. More than 40 percent say they have fewer opportunities than men at their jobs, compared to just 12 percent of men who agree that women get left out. And this hunch only gets worse as women progress. Less than a quarter of entry-level women say their gender has inhibited their success, which grows to 31 percent of middle management and 40 percent of senior management.

Women are likely receiving the message that their ambition won’t get them as far as their male colleagues. One study of particularly ambitious and successful employees of both genders found that among those using proactive tactics to get ahead, twice as many men as women actually advanced. Various studies have found that women are not rewarded for pushing to advance or get more pay—they are, in fact, penalized. The words that spring to co-workers’ minds to describe ambitious women include “bossy,” “pushy,” and “abrasive”—not the praise of being “assertive” or a “go-getter” that is lavished on men.

Women aren’t dumb, nor are they blind. This kind of favoritism can be direct or subtle, but it still gets noticed. Some women will see male peers rising quickly around them while they keep treading water and feel even more motivated to work hard and get ahead. But more realistically, many will realize the futility of trying so hard and give in to the way things are.

The advice to lean in, then, only goes so far. Women start by leaning in, but quickly realize that what they’re leaning into is the immovable wall of structural sexism.