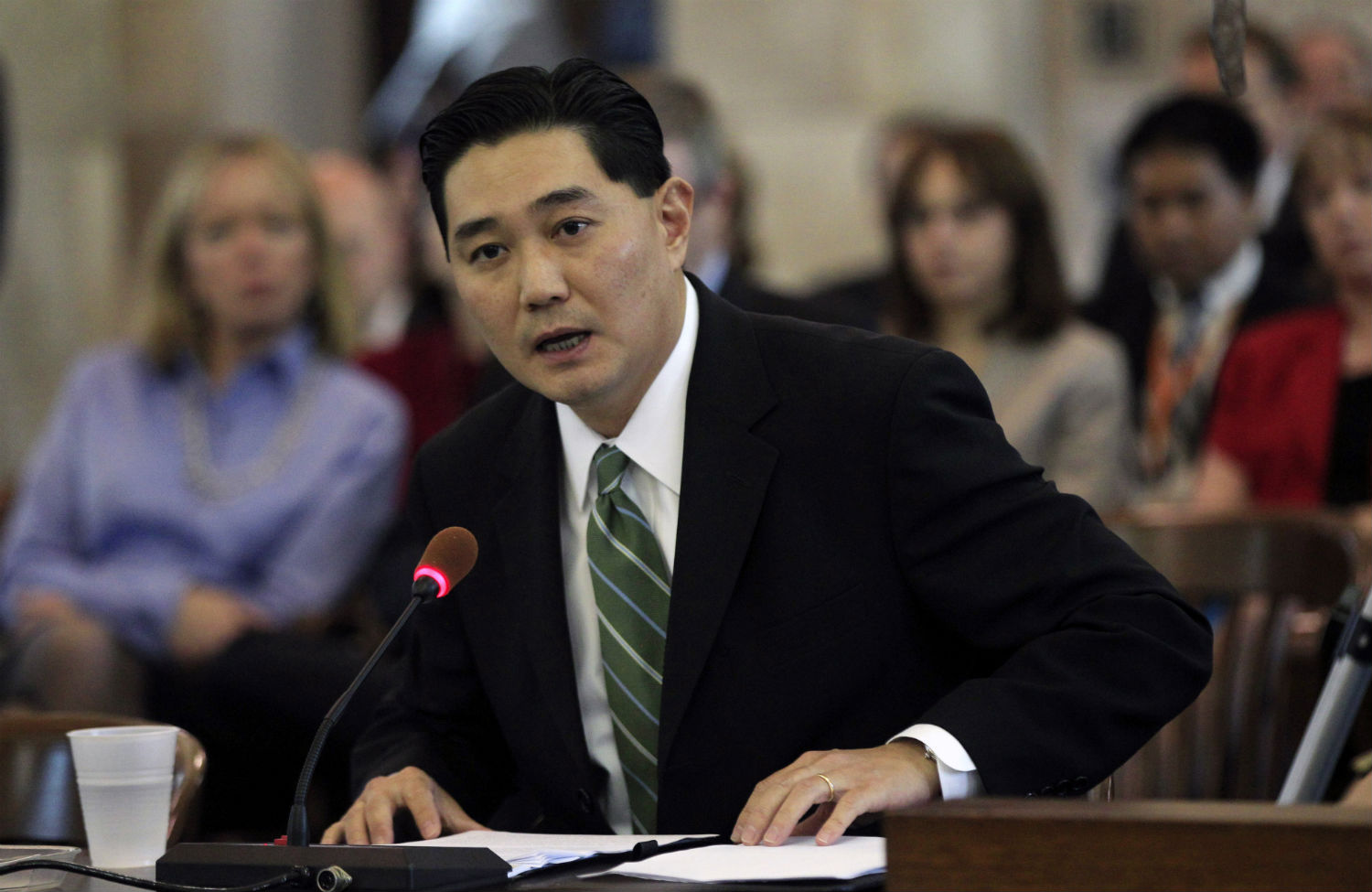 As The Nation’s Christie Watch will document in coming days and weeks, Governor Christie constructed nearly his entire political machine by assembling people he’d worked with—and in many cases, hired himself—during his years as aUS attorney in Newark (2002–08). That office, which launched several phantom investigations of two Democratic governors and one Democratic US senator, was one of the more political and politicized federal prosecutor’s offices in the United States.

Now, one of Christie’s former deputies at the US attorney’s office, Philip Kwon, who’s been caught up in controversy in the past himself, is a central player in Bridgegate, the lane closing scandal involving a decision by Christie aides to shut down two access lanes to the George Washington Bridge in Fort Lee, New Jersey, just across the Hudson River from New York City.

Kwon, it has been reported, spent four or five days counseling one of Bridgegate’s chief players, Bill Baroni, the Port Authority’s deputy executive director, when Baroni was preparing to testify before a New Jersey state legislative committee investigating the lane-closing affair last November. That’s important because Baroni, a close ally of Christie’s, told the legislators that the closings were due to a “traffic study” being conducted by the Port Authority, which manages the bridge. But if there was no traffic study—and by now it’s widely known that there wasn’t any such thing—then what did Kwon tell Baroni to say? Did he counsel him to lie? Was he unaware that there was no study underway? It’s something that the joint committee that’s now investigating Bridgegate is looking into, and in the second round of subpoenas that was issued last week, Kwon’s name was atop the list. (You can read the whole subpoena here, asking for all documents relating to “drafts or earlier versions of, comments on, or changes and edit to the statement read by William E. Baroni.”)

According to The Wall Street Journal, which first reported the Kwon-Baroni consultations, one of the legislators leading the inquiry, State Senator Loretta Weinberg, wondered weeks ago about the Kwon-Baroni connection: “What concerns me is why the Port Authority or any member of the Port Authority staff, if the allegation is true, would have to spend four or five days preparing somebody who told this story that is obviously incorrect.”

Mary Jacobi, thepublisher and editor-in-chief of Main Justice, a publication that focuses on the Department of Justice, the attorney general and the ninety-four US attorney’s offices, has done yeoman’s work on “white collar crime, corruption and compliance.” On February 6, Jacobi compiled thumbnail profiles of Kwon and several other current and former Christie aides who’d served in Christie’s US attorney office between 2002 and 2008. According to her profile of Kwon, he was deputy chief of the criminal division under Christie. After Christie resigned as US attorney in 2008, Kwon became New Jersey’s first assistant attorney general. In 2012, Kwon was nominated to serve on New Jersey’s supreme court. But when that nomination was shot down—for reasons, both personal and political, that we shall see below—Kwon was shuffled over to be deputy general counsel at the Port Authority.

Kwon’s own troubles were widely reported in 2012, in the midst of a bitter struggle—one that still continues—between Christie and the legislature over the makeup of the supreme court. By a 7-6 vote, members of the state senate judiciary committee voted down Kwon’s nomination, handing Christie a big defeat. According to The New York Times, the committee “grilled the nominee, Phillip H. Kwon, for six hours over his past affiliation as a Republican and over an improper pattern of cash deposits made by the liquor store that his wife and mother own.” Added the Times:

Democrats focused witheringly on why Mr. Kwon’s mother and wife had deposited cash from the liquor store [KCP Wines & Liquor Corp. of Mount Vernon, NY] to its bank account in increments of just under $10,000 almost every day for nearly a year— and how much Mr. Kwon knew about it. Currency transactions of $10,000 or more must be reported by banks, and structuring deposits to avoid meeting that threshold is a crime. And, indeed, the government’s case, under the Bank Secrecy Act, charged Kwon’s family with manipulating the deposits in order to avoid government scrutiny, including tax liabilities.

While the liquor store shenanigans made headlines, at the heart of the issue was an attempt by Christie to reshape the supreme court. In particular, the nomination of Kwon and another, simultaneous candidate, both Republicans, would have tilted the balance of the court from Republican to Democrat. As the Newark Star Ledger reported at the time, the Democratic Senate president, Stephen Sweeney, “said Friday in a statement that Democrats would stand their ground until Christie offered a candidate that preserved the political balance of the court. His message: Send us a Democrat.” After the vote blocking Kwan, Christie blasted the Democrats for supporting labor unions who opposed a change in the supreme court. Said Christie:

Phil Kwon was sacrificed on the altar of payback to the NJEA [New Jersey Education Association], the CWA [Communications Workers of America] and the AFL-CIO. They all followed the union line like lemmings.

Something for the legislative committee to look at is the extent to which the job of the Port Authority general counsel has itself been politicized since Christie took office in 2010. The governor’s first appointment to the job, back in 2011, was Paula Dow. In 2010, Christie named Dow as New Jersey’s attorney general, since New Jersey is one of the only states in the United States in which the AG is appointed rather than elected. Then, in 2011, Christie sought to appoint Dow to a judgeship, and when that appointment ran into opposition from Democrats, it seems that Christie decided to temporarily park Dow at the Port Authority as deputy general counsel. There was only one problem with installing Dow at the PA, however: the incumbent, Christopher Hartwyk, who’d had the job since 2003, wasn’t ready to leave. Amid somewhat comical disputes about whether Hartwyk was fired or resigned, and whether or not he ever in fact announced his resignation, Hartwyk did, in fact, eventually give way to Dow—but, in the process, Hartwyk collected a large severance package of about $156,000.

After all that, and after Philip Kwon was rejected as a member of the supreme court, Dow quietly moved on to another position and Kwon took over as the PA’s deputy general counsel.

The politicization of the PA has accelerated dramatically in recent years, according to interviews conducted by The Nation’s Christie Watch with several former PA officials. But a climate of fear and intimidation often prevails, and many retired PA officials fear speaking out because their pensions and other benefits are held hostage by the administration. Speaking on background, these officials emphasized that before the current round of patronage-building and corruption got underway, the PA’s top officials had little or no contact with elected officials in New Jersey and New York, and rarely if ever did a senior appointee get his or her job because of pressure from a governor or elected state official. Said one: “When an elected official suggested someone, there was a tendency to find a reason not to hire him. The ethics of the place was to be independent of partisan political involvement.” Instead PA officials usually came up through the ranks. Not anymore.

The general counsel’s office, in particular, was previously kept apart from political influence, but no longer. Because the general counsel oversees the issuance of bonds, which entails detailed contacts with financial outfits and bond underwriting lawyers, it’s an especially sensitive position.

In a February 17 editorial titled, “The Port Authority Loses Its Way,” The New York Times belatedly recognized the problem of corruption and influence at the agency. In calling for major reforms, it said:

Over the years, the Port Authority has often served as a political candy jar, providing patronage jobs for political allies. Mr. Christie has been particularly skillful at doling out well-paid jobs at the authority to his supporters. By most counts, there are at least 50 agency employees who owe their jobs to the New Jersey governor.

And one of them, of course, is Philip Kwon.