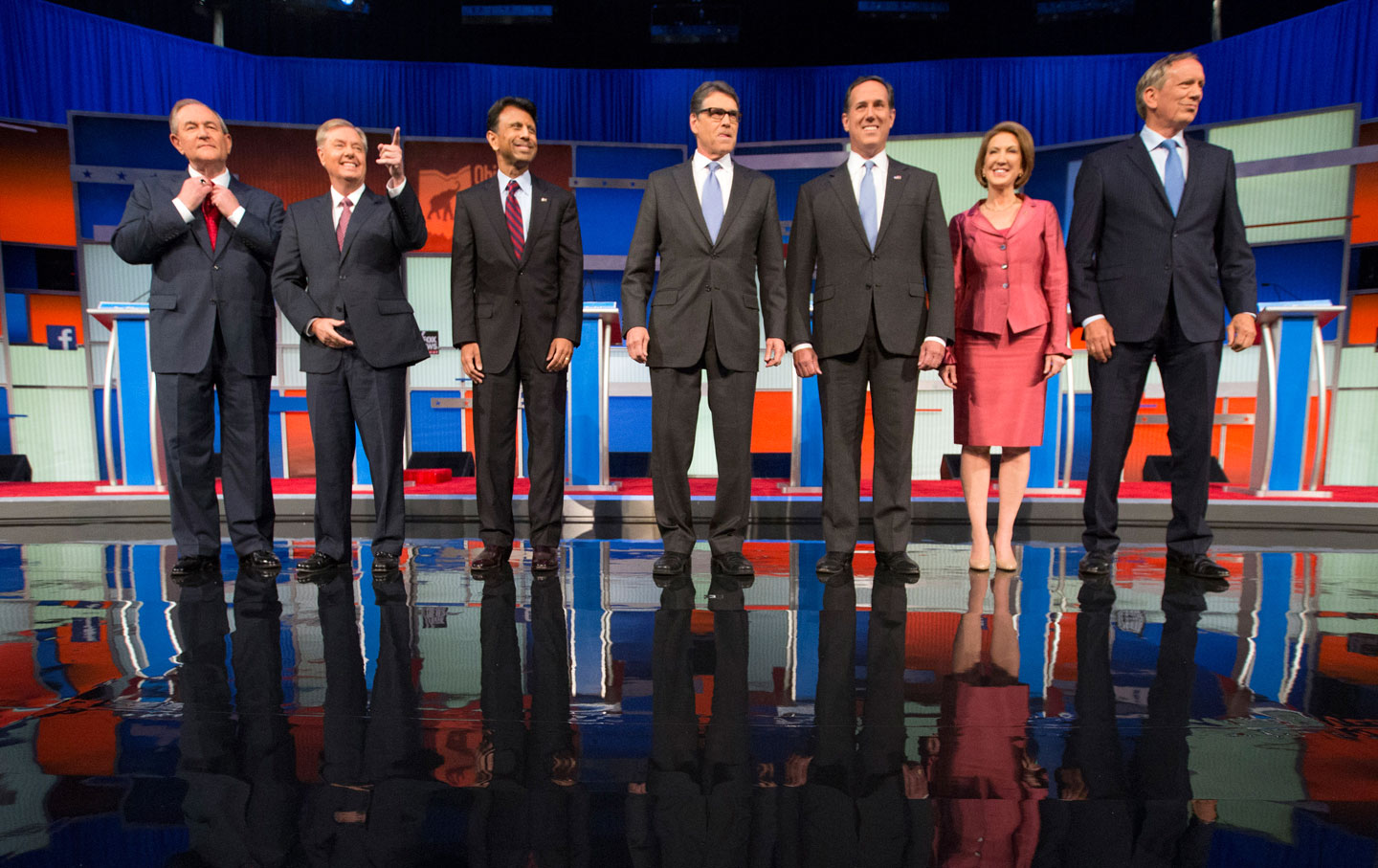 The race for the 2016 Republican presidential nomination blew up months ago. Nothing is as it was. The front-runner at the start of 2015 (Jeb Bush) is polling at 6 percent in the latest CBS News/New York Times poll. The rising star at the start of 2015 (Scott Walker) is polling at 2 percent in the same poll. Another former front-runner (Chris Christie, who after his 2013 reelection briefly shot to the top) is now at 1 percent. And likely Republican voters are most enthusiastic about a pair of political outsiders (Donald Trump and Dr. Ben Carson), who are attracting a combined 50 percent, or more, in recent surveys.

Nothing is as it was.

Yet the Republican National Committee and the media “partners” with which it is managing debates stand amid the wreckage and pretend that the old order is pretty much in place.

In so doing, they are warping the character and content of debates that have proven to be increasingly critical to a competition that is—at least at this point—more defined by free media than advertising strategies.

The warping is most evident at the margins, where the party and its partners make adjustments to help some candidates gain a place in top-tier debates among supposedly “major” contenders, while denying places to equally qualified and potentially more interesting—and controversial—contenders. This is a big deal for second- and third-tier candidates, because, as The New York Times explains, “Mindful that 24 million people watched the August debate on Fox, the Republicans have come to see these monthly encounters as their greatest opportunity to try to break out of the 17 candidate field.”

It is not just at the margins that these decisions influence the direction of the debates, however. By excluding credible contenders who have been particularly critical of Trump—such as Louisiana Governor Bobby Jindal, who recently delivered a blistering speech detailing the front-runner’s flaws—the RNC and its partners are providing a measure of insulation for the blustering billionaire. This may be an unintended consequence. But it is a consequence all the same.

The bottom line is that ill-considered and often unreasonable choices with regard to the debates are defining the Republican presidential race, and similarly poor choices could well shape the Democratic presidential race.

How wrongheaded are the choices that are being made?

Consider the circumstance of Chris Christie.

The governor of New Jersey will part of the main stage debate on Wednesday night, despite the fact that he is tanking everywhere. In the CBS survey and in a new ABC News/Washington Post survey, he is polling no better than candidates who have been consigned to the earlier “kids’ table” debate: Jindal, South Carolina Senator Lindsey Graham, former New York governor George Pataki and former Pennsylvania senator Rick Santorum.

Never mind that Santorum and Graham and Jindal have individually polled better than Christie is recent polls from the first-caucus state of Iowa and from the critical primary state of South Carolina. Never mind that a candidate who was polling as well as Christie in several recent surveys, former Texas Governor Rick Perry, dropped out of the race shortly after being consigned to the kids’-table debate.

Don’t get me wrong. I am glad that Christie will be on the main stage when Republicans gather to debate at the Ronald Reagan Presidential Library in Simi Valley, California. I think all 16 serious candidates—including former Virginia governor Jim Gilmore, who has now been excluded even from the kids’ table—should be part of a single debate. (Or, if that is simply unimaginable, then I think candidates should be randomly assigned to two groups of eight in hopes of having a pair of reasonably interesting and reasonably fair debates.)

But that won’t happen because of an ever-shifting set of rules that benefits some candidates and punishes others based on the evolving whims of political and media elites.

This whole fiasco began when Fox News and the Republican National Committee embraced an absurdly arbitrary rule for who was in and who was out of the first Republican presidential debates on August 6.

It was an irresponsible and anti-democratic approach that prioritized network TV convenience and “visuals” over the reality of an evolving race.

That was confirmed by the actual debates, in which kids’-table candidate Carly Fiorina made far more of an impression—and did her candidacy more favors—than most of the main-stage debate candidates.

Yet, when CNN and the RNC were preparing for the second debate, they essentially accepted the Fox standard.

Then a decision was made to rework the rules to benefit a candidate who should have been included.

Then a decision was made to rework the rules to help a former top contender who would have been excluded.

Confused? Let RNC chair Reince Priebus sort things out: “By not altering the criteria to maybe exclude people who were counting on it, by adding a podium for anyone that might be in the top 10 but not otherwise meeting the criteria I think that the problem is solved and I think that was the right decision and they did the right thing.”

Here’s the political reality: CNN had to bow to the Fiorina reality. So it shifted the timeline for which polls would be used to assign candidates to the two debates it will air September 16. Instead of using polls from July, August, and September, which would have underrepresented the polling spike Fiorina enjoyed following the August 6 Fox debate, the network and the RNC settled on a plan to focus on polls from after the Fox debate to determine who made the cut.

That got Fiorina, who is running a smart and capable campaign (and who was complaining a good deal about her possible exclusion from the main CNN debate), into the 10th slot.

But if the main debate was going to be a 10-candidate event—as the Fox debate was—that meant one of the main-stage debaters from August 6 had to go to the kids’ table on September 16.

This would not do. Shunting aside Christie, a front-runner for the Republican nod before the Bridgegate revelations about closed traffic lanes and political skullduggery in the Garden state, would highlight the arbitrary nature of this whole charade. And Christie, still a favorite of several morning talk shows, would undoubtedly have made a lot of noise about that fact.

So CNN and the RNC established a two-tier standard for getting into their two-tier debates.

How? By using only polls from August and September to get Fiorina on the main stage. And by using a broader set of polls to get Christie across the line.

That’s great for Christie, whose campaign is increasingly hard to imagine as much more than an ego trip. But it is not great at all for candidates who, despite weak poll numbers, are running more serious, coherent and confrontational campaigns than the contender who was undone by the Bridgegate scandal (“Nothing has been proven yet, so let’s see what happens…”) and his own vitriol. This is particularly the case for Graham and Jindal, who have been more willing than most to challenge Trump’s excesses and abuses. Also excluded is Santorum, who is working dramatically harder than Christie and who can point to a track record of coming from way behind in the 2012 Republican race, when he provided the most credible competition to eventual nominee Mitt Romney.

Both political parties and their television-network partners have made a mess of the debates.

The Democrats have scheduled too few debates, started them too late, and established exclusivity rules that threaten candidates who might engage in efforts to open up the process.

The Republicans have established a better schedule. But they have been absurdly arbitrary with their own candidates. The ever-shifting rules benefit some candidates, while punishing others. And the end result is that voters are given a warped view of the process.

At the Reagan Library, the view will favor a candidate, Chris Christie, whose weak campaign would not otherwise have gotten him there. And it will continue to disregard candidates who are trying harder and saying more of consequence than Christie. That’s not right.

The Democrats and the Republicans still have time to get things right. Candidates and media outlets should be pressuring them to do so.

And we should all be making noise now about the fall 2016 debates that are being planned by the bipartisan Commission on Presidential Debates. If past is prologue, they will be even more limited, exclusive, arbitrary, and, ultimately, diminishing of discourse that is essential to democracy.