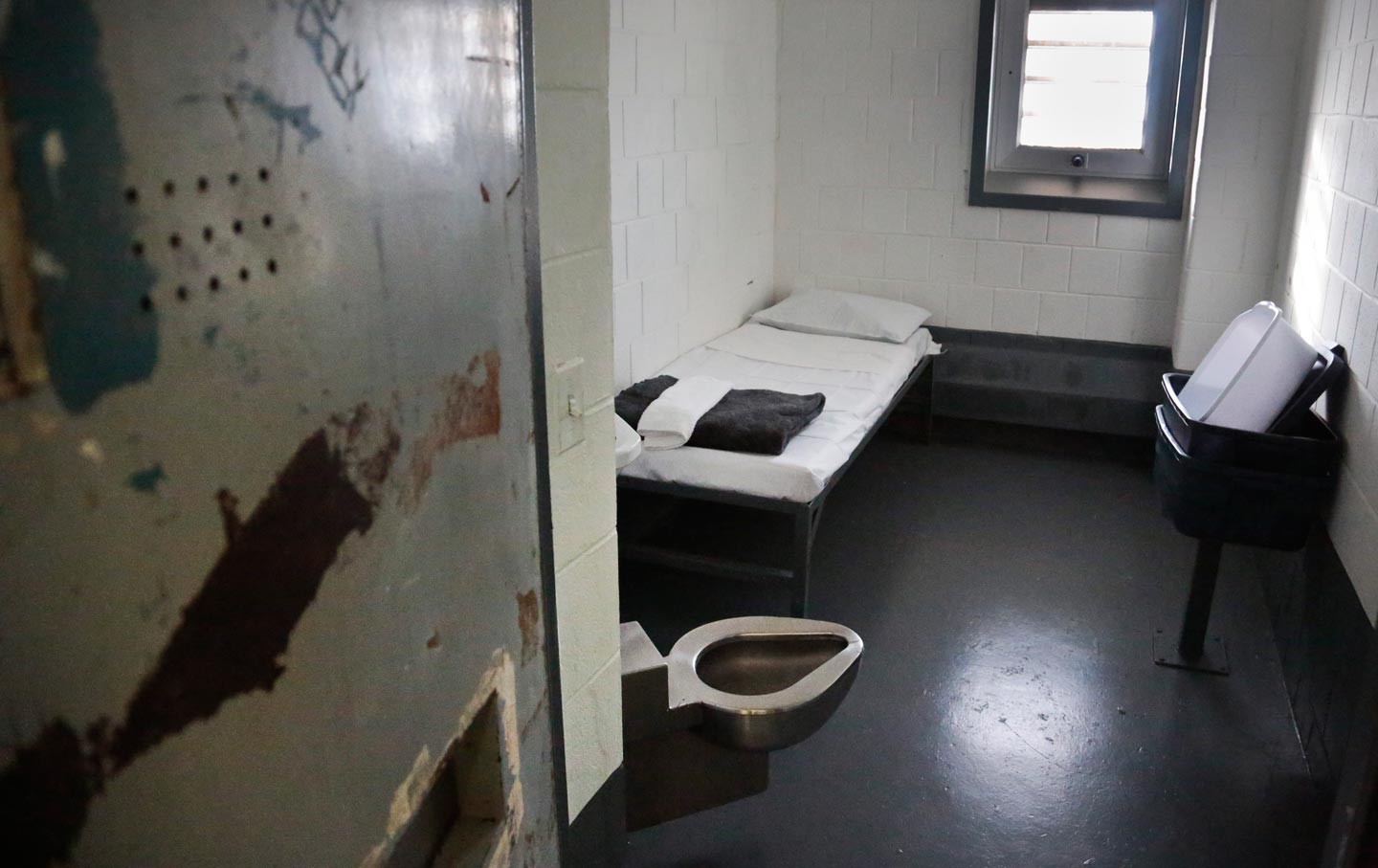 By his 70th birthday in 2013, Russell Maroon Shoatz had spent nearly 30 years in extreme solitary confinement. A prisoner in Pennsylvania’s Restricted Housing Unit (RHU), Shoatz spent 23 hours each day confined to a 7-by-12-foot cell. He ate all his meals alone inside that cell. He slept under lights that were never turned off. He was not allowed any educational, vocational, or group programming. Five days a week, he was permitted to spend one hour in a fenced-in exercise cage. Each time he left his cell, he was strip-searched and placed in shackles. When his family came to visit, he was placed in a booth and made to communicate with them from behind plexiglass. He could not hug his children or hold his grandchildren. Shoatz remained in handcuffs and leg irons during visits.

In 2013, Shoatz filed suit against the Pennsylvania Department of Corrections (DOC). He sought not only an end to his indefinite solitary confinement but also to receive monetary damages for decades of pain and suffering. He argued that prolonged placement in isolation deprived him of numerous basic human needs, including environmental stimulation, social interaction, psychological health, emotional well-being, physical health, sleep, exercise nutrition, and fundamental human dignity. He also argued that the prison had violated the Eighth Amendment prohibition against cruel and unusual punishment and his 14th Amendment right to due process. The DOC argued that Shoatz was subjected to the same conditions as any other prisoner in solitary.

On February 12, federal judge Cynthia Reed Eddy of the US District Court of Western Pennsylvania ruled that Shoatz’s suit should be decided by a jury trial. “While Shoatz may have been subjected to the same conditions as other inmates on administrative custody status, the fact remains that Shoatz endured these conditions for 22 consecutive years,” she wrote in her decision. Furthermore, she noted that the Supreme Court had stated, in Hutto v. Finney, that solitary confinement may be unconstitutional “depending on the duration of the confinement and the conditions thereof.”

Shoatz spent 23 hours each day confined to a 7-by-12-foot cell.… He slept under lights that were never turned off.

Shoatz’s is an individual lawsuit, meaning that, on the surface, the outcome affects him and him alone. But it will also be the first trial by jury that challenges long-term solitary confinement as cruel and unusual punishment for any and everyone, not just vulnerable populations such as the mentally ill, juveniles, or pregnant people.

“Courts have failed to set strict and enforceable limits to solitary confinement,” noted Bret Grote, Shoatz’s attorney and legal director of the Abolitionist Law Center, adding that previous cases have been defeated or settled. (In 2009, prisoners who had been held for decades in the Security Housing Units at California’s Pelican Bay State Prison, filed suit challenging their prolonged solitary confinement. They were granted class-action status in 2014 and was scheduled to go to trial late this year. However, the suit was settled in September 2015.) The outcome may set judicial precedent that others can cite when bringing their own litigation against being held in solitary for long periods of time. According to a 2014 study, between 80,000 to 100,000 people are held in isolation, so the impact of his suit may be far reaching.

In 1970, Shoatz, a 27-year-old member of the Black Panther Party, participated in an attack on a Philadelphia police station in which one officer was killed and another injured. In 1972, Shoatz was convicted of first-degree murder and sentenced to life without parole. Five years later, he escaped from prison, remaining at large for one month. In 1980, he escaped again. Each time he was returned to prison, officials placed him in the RHU.

In 1982, Shoatz was released from the RHU and allowed to live in general population with other men. He became involved with the Pennsylvania Association of Lifers (PAL), the prison’s group for people serving life sentences. He advocated for PAL members to work with their families to lobby lawmakers to repeal life without parole. The men must have been interested—membership ballooned from 12 to nearly 100. The following year, PAL members appointed Shoatz interim president. That same night, prison officials placed him in the RHU where, with the exception of a 19-month period (1989 to 1991) in which he was transferred to a federal prison and allowed to live in general population, Shoatz has spent nearly 30 years in isolation. Twenty-two of those years were consecutive.

Prison officials reviewed his placement every 30 to 90 days; each time, they stated that Shoatz was an escape risk and would remain in RHU. In 2004, the DOC placed Shoatz on its Restricted Release List, meaning that the DOC secretary had to approve his release in writing. But to make it to the secretary’s desk for consideration, the prison’s superintendent first had to recommend a prisoner for release. The superintendent never did. And even though Shoatz’s daughter and attorney personally met with Secretary John Wetzel in 2012, he never reviewed his placement. Shoatz remained in the RHU until 2014.

Those years have taken a toll. Shoatz’s daughter Theresa has spent two decades driving as many as seven hours from her home in Philadelphia to the prison, SCI Greene, for a four-hour visit. Despite the plexiglass window separating them, she and her father frequently had heated political discussions, sometimes incurring a warning from prison staff. “They’d say, ‘Shoatz family—too loud!’” she told The Nation. When Theresa’s son wanted to drop out of high school, Shoatz convinced him not to.

Five years ago, she began noticing a marked difference in her father. He no longer smiled during visits. He lost interest in the outside world. “He’d say, ‘I don’t give a hell about that. That’s happening outside. I’m stuck here in solitary,’” she recalled. He seemed sadder and more distraught. Shoatz later told Dr. James Gilligan, a psychiatrist with over 47 years of experience evaluating and treating people in prisons, that he had considered suicide many times, contemplating ways to kill himself as quickly and painlessly as possible. Only the lack of access to the means to do so stopped him. Some mornings, he was so depressed that he was unable to get out of bed.

In September 2013, four months after filing suit, Shoatz was placed in a step-down program to eventually be released from solitary. In February 2014, he was moved to general population.

Theresa recalls their first post-RHU visit. They sat side-by-side with not even a table between them. She was able to buy him food from the prison vending machine for the first time. (“He ate a hoagie,” she remembered.) Not only was she able to hug her father after more than 20 years, but her 22-year-old son was able to touch his grandfather for the first time in his life.

But the debilitating effects of isolation linger. In January 2015, Dr. Gilligan evaluated Shoatz about the effects of prolonged isolation.

“At first, after leaving solitary, I used to shun people. I would not want to leave my cell,” Shoatz told him. “I am very reticent about shaking hands or hugging people. I have trouble being emotionally close to people.” In 2013, while still in the RHU, Shoatz had proposed to his girlfriend. But the following year, he ended their relationship, explaining to Gilligan, “I was infantilized for so long. I had to deal with very few people. I developed no skills as to how to be in a relationship. I felt relief from the ending of my relationship with her. Nothing painful—I just don’t care.”

“If Shoatz prevails at trial, it will mark the first ruling…that solitary confinement constitutes cruel and unusual punishment when imposed for excessive duration.” —Bret Grote

In his evaluation, Gilligan concluded that Shoatz’s emotional numbing and his incapacity for intimacy are “among the primary symptoms of post-traumatic stress syndromes” caused by his prolonged isolation. He concludes that Shoatz “suffered serious and significant emotional, mental and psychological damage from the conditions to which he was subjected by the defendants in their official capacities in the Pennsylvania Department of Correction.”

Juan Mendez is the United Nations Special Rapporteur on Torture. He has stated that he believes that more than 15 days in “complete 24-hour isolation” constitutes torture. In January 2015, he interviewed Shoatz and concluded that Shoatz’s prolonged isolation “constituted cruel, inhuman or degrading punishment under customary international law standards. They violate solemn commitments of the United States under customary law and also as a party to the UN Convention Against Torture.”

The Pennsylvania Department of Correction declined to comment. Documents filed with the court show that the prison’s superintendent had also identified other reasons for Shoatz’s continued isolation, including his alleged involvement “with radical militant groups, his former association with the Black Panther Party, and his current political views and activities via mail and phone, his ability to organize others,” reasons that Shoatz’s attorney states that he had been unaware of. At deposition, the superintendent stated that his main concern for keeping Shoatz in the RHU was a fear of “retribution against staff.”

Now it will be up to a jury to determine whether prolonged isolation—regardless of age, mental health, or pregnancy—constitutes cruel and unusual punishment. “If Shoatz prevails at trial, it will mark the first ruling against prison officials that solitary confinement constitutes cruel and unusual punishment when imposed for excessive duration,” said Bret Grote, Shoatz’s attorney and legal director of the Abolitionist Law Center. “It will allow others in similar circumstances to cite this case as a precedent in challenging their own conditions.”

“No amount of money can make up what he went through,” Theresa reflected. Noting that advocacy efforts to limit solitary have largely focused on specific vulnerable populations, she added, “Hopefully this gives hope to others in solitary confinement and opens to door to the entire Pennsylvania prison population.”