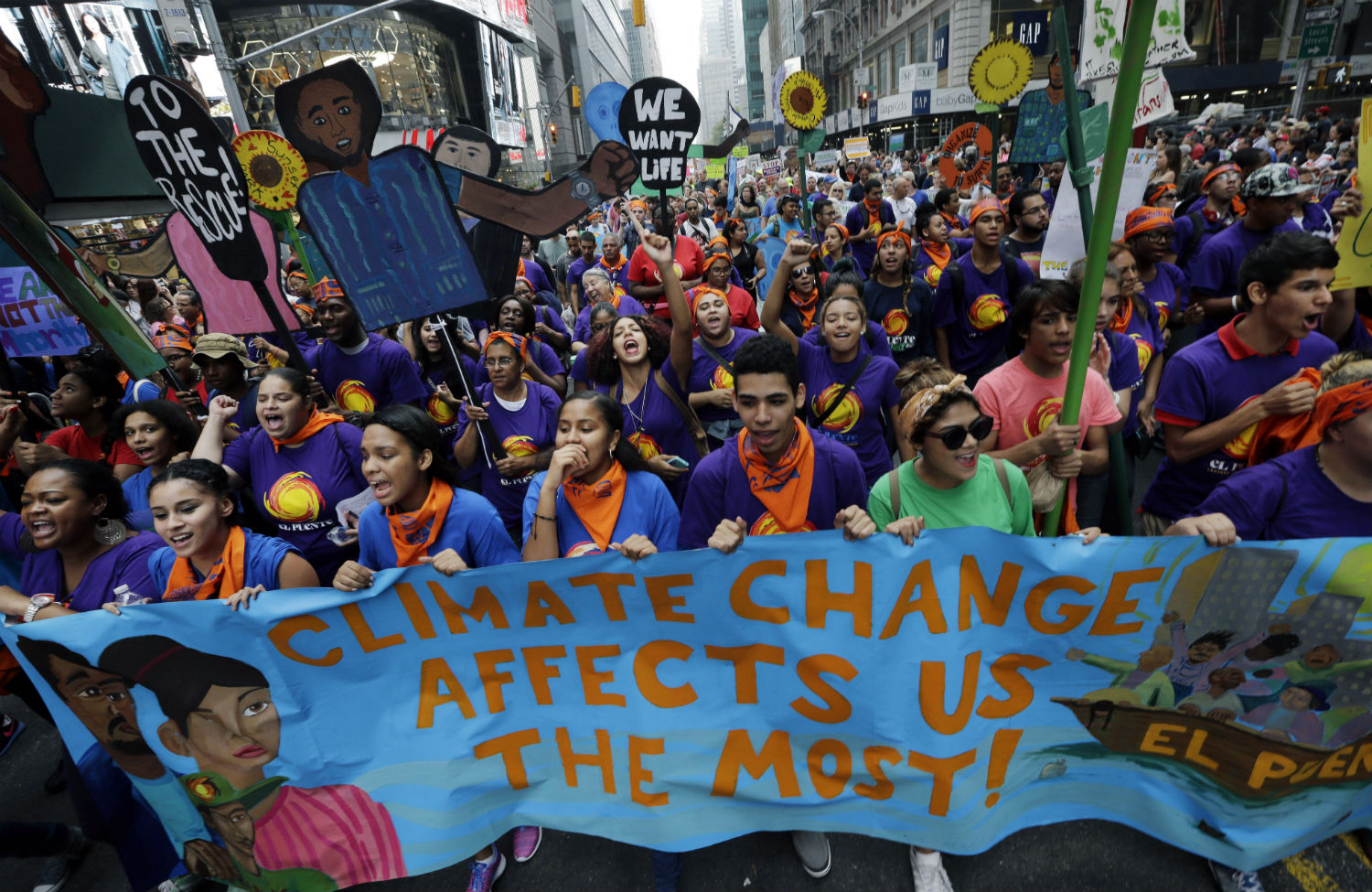 Bill McKibben, the writer and activist who has done more than anyone to call forth a grassroots climate change movement in the United States, is stepping down as chair of the board of 350.org. McKibben will remain a board member of the group that he and six of his students at Middlebury College founded in 2007, driven by their shared conviction that winning the climate fight would require building “a movement just as strong as the civil rights movement was,” as McKibben told The Nation at the time.

Since then, 350.org has helped push the threat of climate change into the mainstream American political agenda. The group has championed the fight against the Keystone XL oil pipeline; spearheaded a campaign to persuade universities and other institutions to divest stock holdings in fossil-fuel companies; and helped to organize the People’s Climate March, that put an unprecedentedly diverse crowd of hundreds of thousands of people in the streets of New York City in September demanding climate justice. This week, 350.org activists are in Lima, Peru, pressuring diplomats at the last official round of international climate negotiations prior to a summit in Paris in December, 2015, where a new treaty is supposed to be signed. Pointing out that, for the second year in a row, a killer typhoon struck the Philippines during international climate negotiations, Zeph Repollo of 350.org demanded that governments kick fossil-fuel companies out of the talks in Lima, declaring, “We refused to accept a future where deadly storms become a way of life.”

Replacing McKibben as board chair will be current 350.org board member K.C. Golden, a Seattle-based activist who has helped to organize grassroots resistance to expanding US coal exports to Asia via ports in the Pacific Northwest. “Oh, my god! There goes a coal train right now,” Golden, the senior policy adviser at the NGO Climate Solutions, told The Nation by cellphone last week from near Seattle’s Pier 61. “The specter of coal trains moving through the Seattle waterfront on their way to China strikes us as—well, what’s beyond irony?” added Golden, who as an aide to Seattle Mayor Paul Schell helped the famously green city eliminate coal from its power supply in 2000.

Notwithstanding that one train, Golden claimed that opponents “are having a lot of success in blocking coal exports”—a battle carrying stakes for the climate that match those of the better-known Keystone XL controversy. “Exporting coal to Asia toasts the planet just as effectively as burning it ourselves,” Golden said. “Asia’s energy markets are by far the fastest growing in world. The direction of the investments they make in the years to come will be the single most important factor in deciding whether we get a handle on climate change in time. ”

McKibben, a longtime Nation contributor, announced his new role in an e-mail sent on December 2 from Sweden, where he was receiving a Right Livelihood Award, known as the “alternative Nobel Prize.” While emphasizing that he was by no means leaving either the climate movement or 350.org—where he will now carry the title of senior adviser—McKibben, 54, wrote that after seven years of nearly constant travel he was “ready for a bit more order in my life. I’ll still be there when the time comes to go to jail, or to march in the streets, or to celebrate the next big win on divestment. But I’d like to see more of my wife,” the writer Sue Halpern, and have “more time and energy for writing, which is how I got into all of this in the first place.”

“Without taking anything away from the incredible work so many people have done, in many ways Bill has been the guy who willed the climate movement into existence,” said Golden. “He just wouldn’t take no for an answer. That’s taken a toll on him. Also, we now see ourselves as a bigger, stronger movement that has gotten past the point where we need Bill to show up every time, everywhere in the world people want him. There’s a lot of new leadership springing up. In particular, May Boeve and other members of the incredible staff at 350 will be more visible going forward.”

The People’s Climate March that Boeve, the executive director of 350.org, and others helped to organize signaled the arrival of the US climate movement on the global stage. The size of the crowd exceeded all expectations—the initial target was 100,000, the eventual total at least twice as large. The march also led none other than ExxonMobil to increase its “shadow” price on carbon because the march increased the likelihood that the US government would eventually act to limit greenhouse gas emissions. “[To see] that many people marching is clearly going to put pressure on government to do something,” Alan Jeffers, ExxonMobil’s media officer told Bloomberg Businessweek.

The extraordinary diversity of the People’s Climate March—which brought together people from across racial and socioeconomic backgrounds—bespoke a different approach to organizing and activism than had characterized traditional environmental politics in the United States. This new approach aims at building a broad-based movement that can wield, not merely appeal to, political power. “This march [was] led by environmental justice groups and includes nurses, farmers, labor organizers, young people and activists working on immigrant rights, economic equality and indigenous rights,” said Annie Leonard, the new executive director of Greenpeace USA. “If we environmentalists had done real power-building work like this twenty years ago, we wouldn’t be in this climate mess we’re in now.”

“Personally, I was lifted up by the new, insistent, creative, nimble movement building energy that 350 represents—it was a breath of fresh air,” said Golden, recalling his first impressions of the group. After the twin debacles of the failed Copenhagen climate summit in 2009 and the defeat of cap-and-trade legislation on Capitol Hill in 2010, there were many efforts to figure out how US activists should continue the climate fight. Rejecting the long-standing focus of mainstream groups on inside-the-Beltway compromising, McKibben and 350.org urged an appeal to moral outrage and a reliance on civil disobedience and other forms of in-your-face militancy. The group also harnessed the power of social media better than older environmental groups had. 350.org now claims an e-mail list of about a million members, though Jeremy Osborn, the group’s operations director, noted that e-mails are but part of its outreach: “social media tools, partnerships, and independent networks of organizers around the world play a big role in our public engagement.” In 2013, 350.org had a budget of $8 million, Osborn said, 60 percent of which came from foundations and 40 percent from individual donors.

Looking ahead, Golden said that the “basic bread and butter of 350” will remain the same: “finding new ways to draw a line in the sand and give people an opportunity to pull away from this dystopian spiral of continued investment in fossil fuels and toward the positive future we know how to build with renewable energy.” Divestment from fossil fuels will remain a priority. Noting that his daughter helped lead the student campaign for divestment at Williams College, Golden said, “Divestment is something everyone can do, wherever they are—on a campus, in their communities, in their households. It’s an opportunity to take back our power by removing our financial support from climate-damaging activities and investing instead in the cycle of sustainability.”

Echoing arguments by Nation contributor and This Changes Everything author Naomi Klein, Golden added that one of the most important tasks ahead for the reinvigorated climate justice movement is to “rebuild our sense of our ability to act collectively and at scale—to do great, big things together. So many of us who understand the science [of climate change] are nevertheless not acting in a way that reflects that understanding. A lot of this is because we realize that if the science is real, then, wow, we’re going to have to do something big and brave and revolutionary together.” Yet the successes that 350.org and others have had in blocking the Keystone XL pipeline, alongside the spectacular growth that solar and wind power, electric cars and other solutions have enjoyed in recent years, are genuine cause for hope. “Finding our ability to resist things like Keystone and coal exports that conventional wisdom said we could never defeat, and doing so at the same time that we’re building the alternatives that will make those things irrelevant, is tremendously encouraging and empowering,” Golden argued.

“I feel like we have a compass and a good sense of where north is, but we’re still drawing the map” for reaching a climate-safe future, he concluded. But thanks to the work of McKibben, 350.org and others, Golden said, there has emerged over the past twenty-four months a bona fide, self-aware, growing social movement that is determined to reach that future. “For a long time, the question was, were we going to show up? I feel a lot more sanguine now, because that question has been answered. We’re showing up for the fight.”