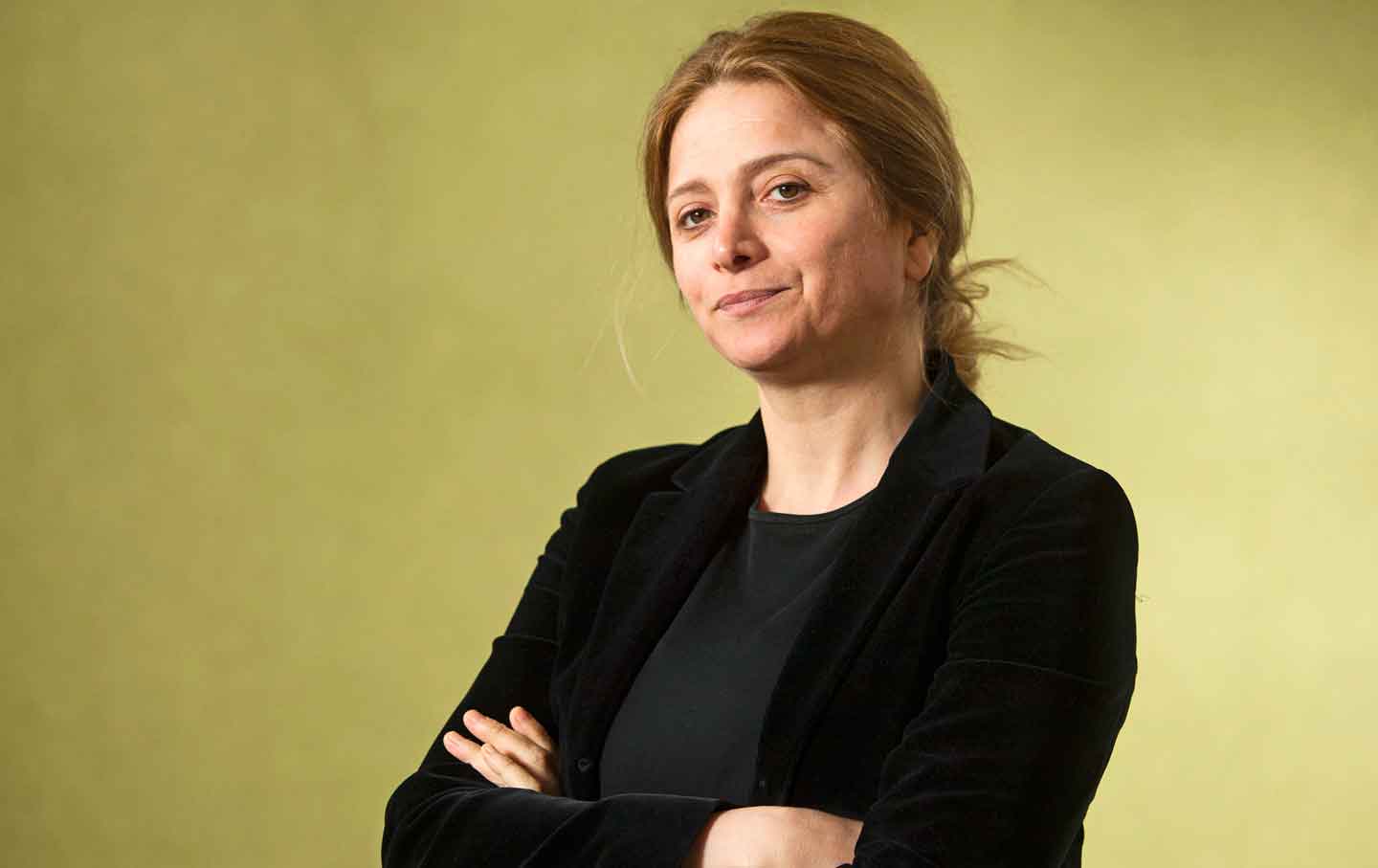 In the spring and summer of 2011,  Samar Yazbek, an outspoken Syrian writer and journalist in Damascus from a prominent Alawite family, kept a diary of the first hundred days of what soon became her country’s civil war. The diary became a book, A Woman in the Crossfire: Diaries of the Syrian Revolution, which describes in grave, essential detail what it was like to be forced into exile as protesters were being rounded up, tortured, or shot in the streets. Condemned by security officials as a traitor for backing the protests and, in their eyes, abandoning her sect—the Alawites are an offshoot of Shia Islam to which Syrian President Bashar al-Assad and many others in his regime belong—Yazbek fled with her daughter to France.

Her new book, The Crossing: My Journey to the Shattered Heart of Syria (Ebury; £8.99), is a remarkable, devastating account of the three increasingly dangerous trips that Yazbek made to northern Syria in 2012 and 2013, sneaking over the Turkish border each time. “I dipped into the first layer of hell,” she writes, and was dragged “even further, into a deeper abyss.”

While it combines travelogue, war reporting, and memoir, The Crossing is an anthology of Syrian voices above all. Secular activists and once-hopeful revolutionaries in the Idlib province tell Yazbek their survival stories as they dodge snipers and wait out aerial bombardments in basement bunkers or cavernous Roman-era tombs. Soldiers who defected detail the cruelties they witnessed and were ordered to inflict on civilians; they refused and fled for rebel-held territory.

Yazbek also meets the local commanders of two major jihadist groups, the Salafi militia Ahrar al-Sham and the Nusra Front, Al Qaeda’s Syrian affiliate. Both militant leaders call themselves emirs. The Nusra commander, previously a contractor in Lebanon, seems polite and articulate at first, promising Yazbek that, once Assad falls, he’ll go back to his construction job and to the “olive grove and children waiting for me along with my wife.” But he still has a vision of a Syria governed by Islamic law. “There’s no place for Alawites among us,” he says. And Christians would either convert to Islam or pay a tax.

Yazbek’s three trips offer snapshots of the war’s evolution. In 2012, resistance still seems possible in some of the liberated villages and towns in Idlib, where radio stations, newspapers, and other trappings of civil society are beginning to take root. But a year later, the Assad regime’s relentless air strikes and barrel bombings have taken their toll, pushing more civilians underground or out of the country while foreign jihadists pour in.

Regime terror is a decisive factor. “Binnish was liberated on the ground,” Yazbek writes of one village, “but remained betrayed by the sky, by the treachery of aircraft and tanks.” It’s a betrayal she hears about many times. But as an editor of a newspaper in one liberated town tells her, the biggest threats aren’t the regime’s bombs or the lack of international support for the ragtag Free Syrian Army—the “armed people’s resistance brigades,” as Yazbek thinks it should be called. “No, the most dangerous thing is the way the takfiris, the Islamic extremists, are edging their way in and starting to control people’s lives and interfere in their business.”

By her third trip, in July and August of 2013, that change is more palpable. “An authoritarian power of a different kind had entered the scene and was starting to form a serious obstacle to any civil activism or any attempt to rebuild the shattered society,” she writes. The Islamic State (ISIS) is ominously emerging to play “the leading role in this morbid theatre of blood.” Yazbek passes through an ISIS checkpoint manned by fighters from Mauritania and Iraq. “How could these strangers occupy our land?”

It wasn’t a coincidence, she says, that “peaceful activists were being tortured, killed and exiled at the same time as these fundamentalist Islamists were being released” from regime jails. That was Assad’s strategy. What followed was a flood of holy warriors and foreign fighters taking part in “an orderly, well-planned operation to divide up the liberated north as spoils among jihadist incomers.”

To Yazbek’s credit, she’s unflinching in her analysis of the war’s many actors, including the more moderate fighters loosely aligned with the Free Syrian Army, who plunder and loot like the jihadists they sometimes battle alongside. She visits a once-stunning mosaic museum in the town of Maarat al-Numan. Assad’s forces had shelled the museum; Nusra fighters had decapitated the statue of a cherished medieval poet at its entrance—and everyone, it seemed, including the rebel brigade holed up in the museum, had ransacked it. “There are more thieves in the revolution now than rebels,” one of Yazbek’s guides tells her.

In the face of a tyranny of thieves, Yazbek’s book remains infused with hopes of coexistence. But in Syria today, are those merely the dreams of an exile? Just before crossing back into Turkey on her first trip in 2012, she meets a young Sunni fighter. Before taking up arms, he was in his second year of college, majoring in business. He wants a civil state, he says, but then curses the Alawites. When he’s told who Yazbek is, he tries to apologize and explain himself. Yazbek replies, “I’m not an Alawite. And you’re not a Sunni. I’m Syrian and you’re Syrian.” The fighter, Yazbek says, just looked at her in astonishment.