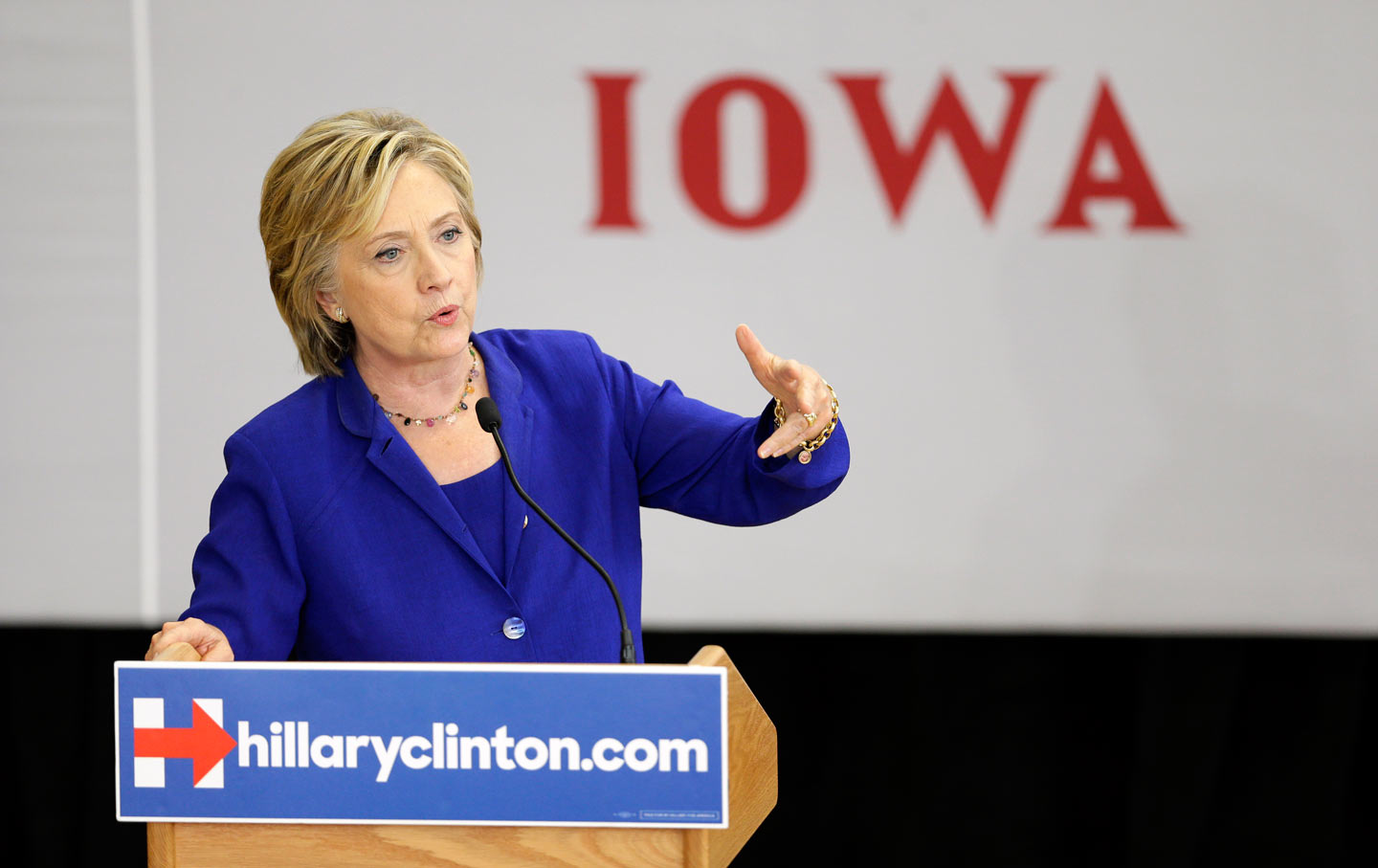 Hillary Clinton tells voters that she opposes the Keystone XL pipeline at a campaign stop in Iowa on September 22, 2015. (AP Photo / Charlie Neibergall)

Few groups are more savvy and effective when it comes to supporting candidates than the League of Conservation Voters and the LCV Action Fund. For almost 50 years, the league has challenged Republicans and Democrats to step up on a wide range of environmental issues, and it has a long track record of holding politicians to account while intervening to help elect environmental allies.

So the LCV Action Fund endorsement Monday of Hillary Clinton for the Democratic presidential nomination is a big deal. It is not just the earliest-ever endorsement in the history of the LCV Action Fund; it is an enthusiastic embrace, with fund president Gene Karpinski declaring, “When it comes to fighting the climate crisis, the stakes couldn’t be higher—and we are confident that Hillary Clinton is the right person for the job. With her proven history of leadership, strong environmental record, and a campaign committed to building a clean energy future, Hillary Clinton is without a doubt the most effective leader to stand up to Big Polluters and push forward an aggressive plan to tackle climate change and get it done.”

This warm endorsement from a key environmental group is important for Clinton, as several leading environmental activists and groups are backing Clinton’s chief rival for the Democratic nomination, Vermont Senator Bernie Sanders. Bill McKibben, the co-founder of 350.org, is an ardent Sanders backer, who hails his fellow Vermonter as a champion on climate change issues. Friends of the Earth Action is also backing Sanders, with the group’s president, Erich Pica, saying, “We’re seeing a lot of speeches from candidates, but Bernie has an incredibly strong track record and there’s a lot of credibility there. He’s also willing to say ‘no’ where some other candidates aren’t.”

Additionally, former Maryland governor Martin O’Malley is campaigning on a bold environmental platform that calls for the end of fossil-fuel use and a full clean-energy economy by 2050. O’Malley has earned high marks from environmentalists for arguing that “New technologies have put a clean energy, energy independent future within reach—while the threat of climate change, and the urgent need for new middle-­class jobs, makes it imperative that we aggressively pursue it.”

"Hillary Clinton is the leader we need to meet the climate crisis head-on.” —Carol Browner

Clinton has taken hits for being slow to oppose the Keystone XL pipeline and for what National Journal refers to as “a mixed record on environmental and energy issues.” LCV maintains a well-regarded scorecard that rates members of Congress based on their voting records. Clinton’s lifetime score is 82 percent, while Sanders’s score is 95 percent. (LCV aides says Clinton’s score was lower because she missed key Senate votes while campaigning for president in 2007 and 2008.) The group does not score governors in the same way, but The Washington Post reports that “its state affiliate Maryland LCV issues occasional governor scorecards, and O’Malley received an A-minus rating for 2007-2008 and a B-plus for 2009-2011.”

Clinton flew to New Hampshire to accept the LCV endorsement, recognizing the significance it has for Democrats and independents—especially younger voters—who are focused on issues of climate change and sustainability.

LCV board chair Carol M. Browner focused on the climate issue in talking up Clinton.

“As a presidential candidate, Hillary Clinton has made the need to grow a sustainable, clean energy economy and tackling climate change a major part of her conversation with voters,” said Browner, a former EPA administrator who served as director of the Office of Energy and Climate Change Policy under President Obama. “With a history of leadership on the international stage and a commitment to protecting public health, Hillary Clinton is the leader we need to meet the climate crisis head-on.”

The League of Conservation Voters has endorsed in Democratic primary contests before—famously backing then–Massachusetts Senator John Kerry just before the 2004 New Hampshire primary. But the endorsement of Hillary Clinton is the first to come before the Iowa caucuses.

The LCV waited even longer in 2008, endorsing Obama in July of that year.

Obama did get a key endorsement from Friends of the Earth Action during the 2008 race. At a late stage in the fight for the Democratic nomination, when Obama and Clinton were clashing over the merits of a “gas tax holiday,” Friends of the Earth Action declared for him, arguing that “Senator Obama refused to play that typical Washington game. Instead, Obama called for real solutions that would make transportation more affordable and curb global warming. He showed the courage and candor we expect from a president.”