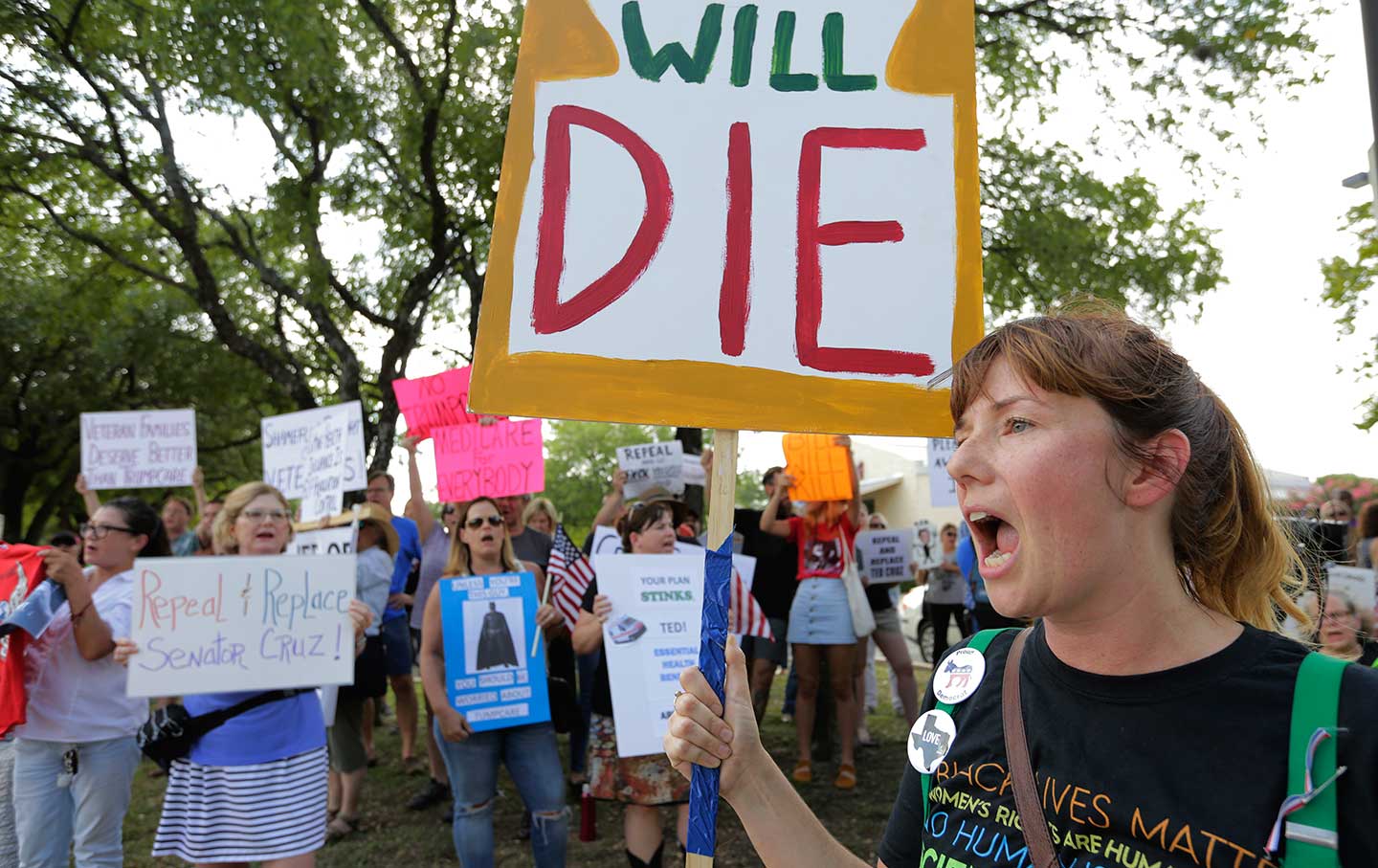 The new Republican “health-care” bill is out and it’s bad. Once again, it slashes Medicaid, cuts funds from Planned Parenthood, and would likely cause millions of people to lose their insurance.

This fight is far from over. The Congressional Budget Office is expected to release a score of the new bill on Monday and Republicans could schedule the first procedural vote as early as Tuesday or Wednesday.

On top of that, Senator Mitch McConnell has cancelled the first two weeks of the Senate’s August recess to have more time to ram the health-care bill through. That also means another two weeks of lawmakers not having to face constituents in their districts furious that their elected officials would take away the care many need to survive.

We were only able to block previous iterations of the GOP’s health-care plans after massive public pressure. It’s time to step up again. Below are five things you can do in the coming week to keep up the fight. To get a weekly email detailing more actions like this, sign up for The Nation’s new “Take Action Now” newsletter.

1. This Monday, July 17, head to DC for an emergency sit-in in the halls of the US Capitol and tell lawmakers: Kill the Bill, Not Us. Training and legal support will be provided for all who risk arrest, and free mass housing in a church is available for anyone who needs it. You can find more information and sign up here.

2. This Tuesday, July 18, join the #KilltheBill day of action. Indivisible chapters have organized many of the health-care actions we’ve seen so far, and this Tuesday their entire network will be taking coordinated action against the bill. The day of action will consist of visits to local senators’ offices, rallies held outside the offices, and visits and demonstrations at senators’ DC offices—all with the goal of bringing lawmakers the health-care stories of their constituents and demanding they vote “no” on Trumpcare. You can find more details and learn how to get involved here.

3. Keep calling. You’ve been asked to do this a lot but it’s still absolutely necessary. You can reach your own senators through the Congressional hotline at (202) 224-3121 or help flood the lines of key Republican senators by using Credo’s phone banking tool.

4. Share Your Health-Care Story. The energy behind this fight has drawn enormous power from the countless number of families who have shared heartbreaking stories about their fears of losing insurance. Indivisible Austin, along with the Children’s Defense Fund Texas and Indivisible KC, has created a website that makes it easy to add your story. Visit protectourcare.us and you can submit a story in writing, through a photo, or by video. The team behind the website will then post it on protectourcare.us, add it to YouTube if it’s a video submission, e-mail it to congressional staffers and tweet it at senators.

5. Donate to organizations on the front lines. Even if you’re unable to attend a sit-in or protest, you can still help by donating to the people who are making them happen. Find out who is organizing in your area or donate to a national group. Two we recommend supporting are ADAPT, a grassroots disability-rights group that has been at the forefront of this fight, and Housing Works, a healing community of people living with and affected by HIV/AIDS with the mission to end the dual crises of homelessness and AIDS. Both have been crucial in the fight against Trumpcare and to protect Medicaid. Your money will directly support nonviolent direct action, including legal fees and transportation to DC for activists from around the country.