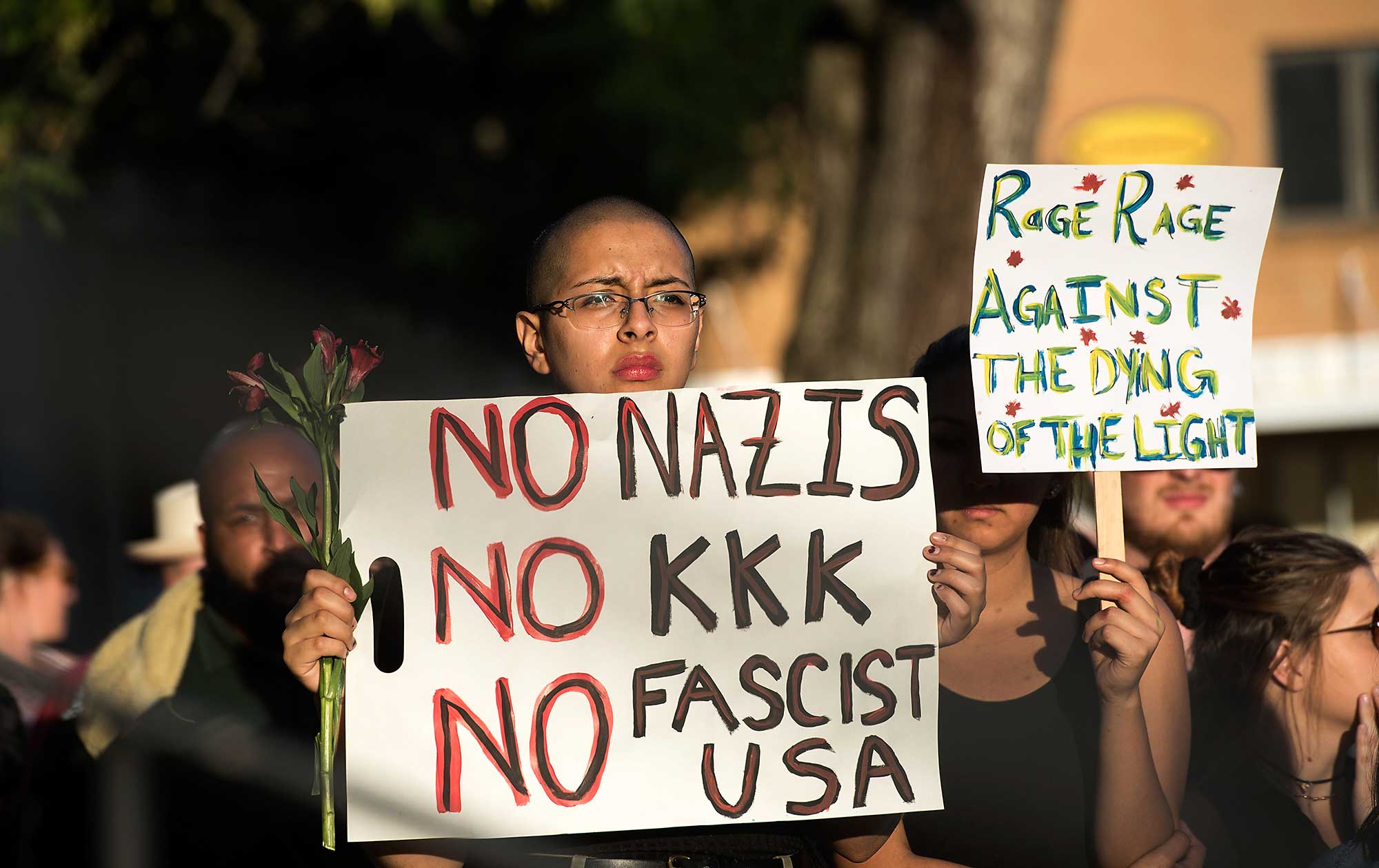 Brenda Diaz-Castro, holds a sign during a candlelight vigil on Sunday, August 13, 2017, in Harrisonburg, Virginia. The vigil was held for the victims of the violence in Charlottesville on Saturday. (Stephen Swofford / Daily News-Record via AP)

This weekend was heartbreaking. White nationalists descended on the community of Charlottesville, Virginia, with a message of hatred, racism, anti-Semitism, and terrorism. Heather Heyer, one of the brave protesters fighting back, was killed and 19 others were injured when a white supremacist plowed his car into a crowd of demonstrators.

Encouragingly, thousands of people across the country gathered this weekend for vigils to reject racism and to stand in solidarity with the victims of the violence. Here are some ways you can join the continuing fight against the hatred and white supremacy on display this weekend and too often throughout our nation’s history:

1. Donate to help the victims. There are a number of funds set up to support the victims of this weekend’s violence. Already, people have raised over $200,000 to support the family of Heyer and over $146,000 for a legal fund for protesters. You can still donate to help Natalie Romero, a counter-protester who was severely injured this weekend (and who does not have health insurance), to help Deandre Harris, who was beaten by white supremacists this weekend (the photo taken of him shortly after the attack has gone viral), or to a medical fund for all 19 injured in the attack on Saturday.

3. Join a national call tonight, August 14, at 9 pm EST to learn how you can defend communities of color from Charlottesville to the White House. The call is organized by the Movement for Black Lives and you can register for it here.

4. Take action tomorrow to protect DACA and immigrant youth. The racist right wing has no doubt been emboldened by the anti-immigrant rhetoric and policies of Donald Trump. Tomorrow, August 15, immigrants and allies across the country will join demonstrations to defend DACA (Deferred Action for Childhood Arrivals) and demand the protection of all immigrant youth. With the lives of over 1 million people on the line, it is crucial that we all show up. You can read more and find an event near you here.

5. Sign ColorofChange’s petition to remove all confederate symbols in the US. White nationalists came to Charlottesville this weekend to rally around a statue of Robert E. Lee, the Confederate commander. As ColorofChange puts it, these statues are “an assertion of the continued imposition of white supremacy and its current political power” and taking them down should be “one step among many in sending the message that we are no longer honoring white supremacy at a societal level.” You can sign the petition here.

6. Hold your members of Congress accountable and demand that they take action to fight the hate on display in Charlottesville. Indivisible has posted a guide detailing four concrete demands you should make of your members of Congress. They include funding in the national budget for fighting white nationalism, protecting immigrants from deportation, and the expulsion of all Trump cabinet members associated with white nationalism.