In his increasingly chaotic campaign for president, embattled Republican nominee Donald Trump has one issue going for him: trade. Trump has been running successfully against NAFTA, trade with China, and globalization in general. He promises white working-class voters that his version of economic isolationism can restore security and dignity to their lives. Hillary Clinton has struggled to counter him on these points, with Trump attacking her previous support for a new Trans-Pacific Partnership trade deal and her husband’s signing of NAFTA.

Trump is correct that trade has had serious negative consequences for working-class people. But his plan is to wall off the United States, magically conjure “better” (but undefined) trade deals, and bring back a manufacturing economy that no longer exists and never will. Instead of letting these half-baked ideas dominate the conversation, progressives need a broader trade policy that would benefit those Americans who have been left behind.

Trump’s trade rhetoric is powerful, but progressives have a better plan than isolationism.

Globalization has had serious impacts on working-class communities—but we need to know which part of globalization we’re talking about. Though Trump often focuses on NAFTA, the volume of trade with Mexico produced by the deal ultimately wasn’t big enough to disrupt the lives of many American workers. What really made the difference was China’s entry into the World Trade Organization. As the economists David Autor, David Dorn, and Gordon Hanson have found, areas that were exposed to the most trade with China faced significant, long-lasting negative consequences for workers. Manufacturing was hit hard, and so were workers outside manufacturing—especially those without a college degree—as these areas lost their economic vitality. Contrary to the optimistic forecasts offered by many economists, workers didn’t magically get jobs in new places and new industries; instead, they faced worse employment prospects and lower wages—if they found jobs at all.

So what can be done? First, we need a progressive vision of what trade deals should look like in the future. Here’s one: At this point in globalization’s spread, these deals are less about direct trading between countries and far more about the regulations that govern multinational corporations as they expand across the globe. We should be sure that trade deals don’t interfere with any country’s ability to regulate corporate behavior. So-called “investor-state dispute settlements” do just that, by allowing companies to sue countries over their domestic regulations in opaque international tribunals. We also shouldn’t use trade deals to allow sectors like the pharmaceutical industry to push regulations friendly to them into developing nations. The labor movement must be strong internationally to avoid a global race to the bottom, so any progressive trade deal should boost workers’ power in other countries. And within these deals, we need mechanisms to prevent other countries from manipulating their currency, which China did to its great benefit during the 2000s. 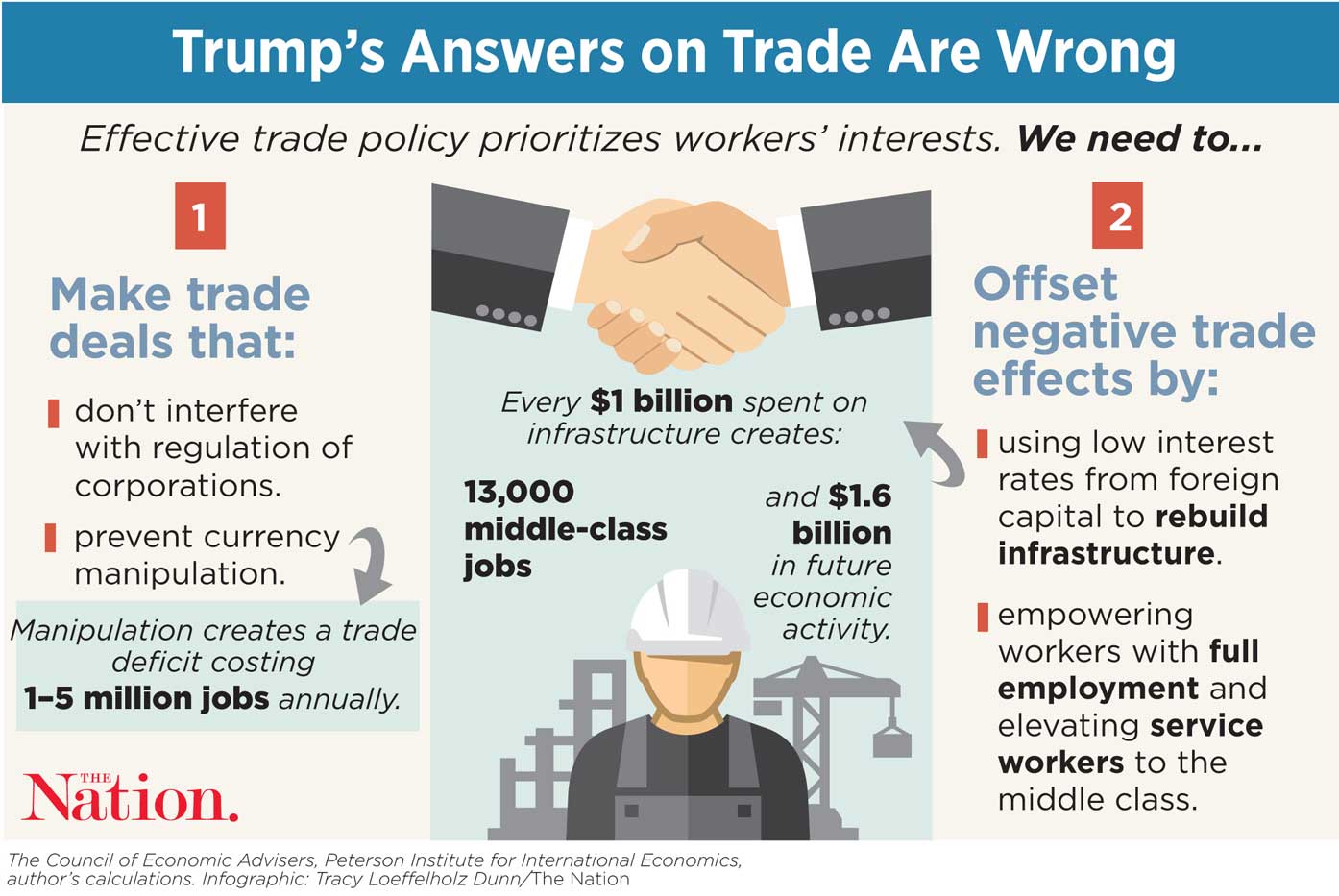 Second, we will likely have a trade deficit no matter what we do, because US debt is valuable to many countries as a means of payment and as a protection against financial collapse. If we were to resist that exchange, as Trump suggests, we would destabilize foreign economies and disrupt our own as well. As the economist J.W. Mason notes, we should be focused on channeling this foreign capital into productive investment at home, including job-creating infrastructure that can boost growth. A Green Keynesianism could use the trade deficit to combat global warming while creating good jobs for workers—a win for everyone across the globe.

For anyone who still doesn’t benefit or cannot work, we must make America a less brutal country in which to be unemployed by delinking benefits like affordable health care from employment.

In the mid-20th century, the New Deal turned manufacturing into a source of secure middle-class jobs, capable of providing for workers and their families. Our economy will be dominated by service industries in the coming decades; making those jobs plentiful and well-paid is our essential task. The nostalgia of Trump’s trade rhetoric is powerful, but progressives have smarter answers.