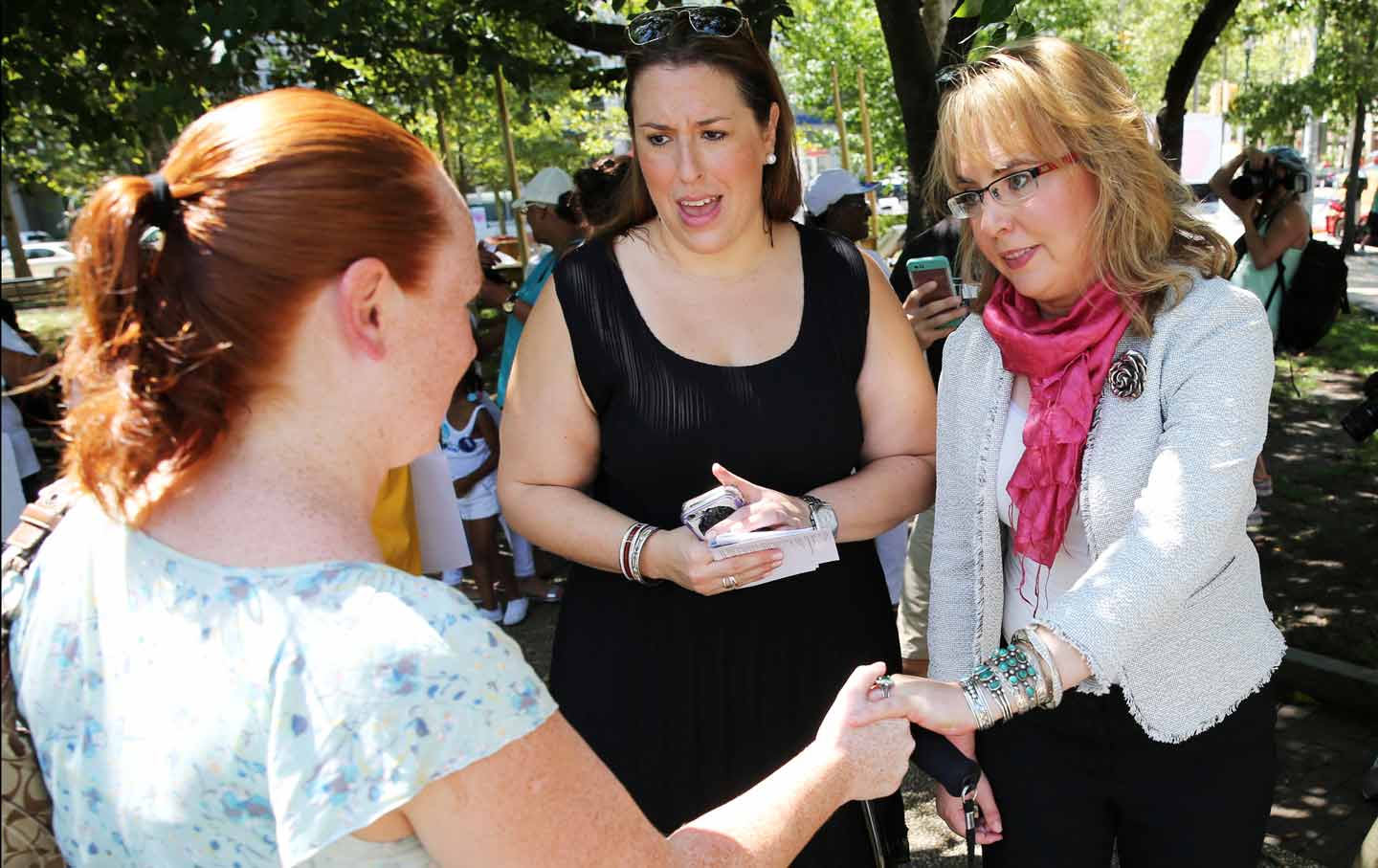 Philadelphia—There’s a popular meme that crops up on Facebook after mass shootings, to the effect that the American gun-control debate ended after Sandy Hook when the country decided the killing of 20 children was bearable.

Senator Chris Murphy has a different view. He acknowledges the pro–gun control forces “weren’t ready” to do battle with the NRA in early 2013, but that the failed vote was the beginning, not the end. “We pledged that day to build a political movement around combating gun violence that would be bigger, badder, and stronger than anything the gun lobby could do,” he told a crowd in a downtown Philadelphia park Tuesday.

The movement may not have yet matched the NRA’s ability to create single-issue voters around the issue of guns, but the Democratic National Convention is a good time to take stock of how quickly the gun-control movement has blossomed within Democratic politics in four short years.

In 2012, gun control was almost a bad word, rarely spoken on stage in Charlotte. A few months earlier, Obama angered the gun-control community by refusing to call for any new laws after the mass shooting at a movie theater in Aurora, Colorado.

Now guns are a central theme in Philadelphia. Gun-control activists will speak in prime time throughout the week, building to the nomination of Hillary Clinton, the first presidential candidate to make gun control a major issue in decades. Her running mate, Senator Tim Kaine, is being sold to some skeptical members of the party base by highlighting his tough stances on gun laws following the shooting at Virginia Tech.

“This ticket clearly shows that there’s a sea change in the politics of this issue, from the presidential campaigns on down. Candidates are running on this issue, and we think they’re going to win on this issue,” said Mark Kelly, who leads Americans for Responsible Solutions with his wife, former representative Gabby Giffords. “Clearly, it’s not 1994 anymore.”

That was the year that Bill Clinton explicitly blamed the assault-weapons ban in his big crime legislation for costing Democrats the House of Representatives. This time around, gun-control advocates think guns might help flip congressional seats back in their direction.

Large majorities of voters—even Republicans—have long supported things like universal background checks, but not as a primary issue. That’s partly why Republicans suffered essentially no electoral punishment for blocking the post-Newtown legislative package in 2013. But a recent Pew poll showed gun control climbing up the list of voter priorities—guns were ranked fifth-most-important in a survey last month, ahead of things like immigration, trade, the Supreme Court, and Social Security.

To take advantage of these new dynamics, Americans for Responsible Solutions will be endorsing several congressional and state-level candidates this year and spending significant money on the airwaves. They’ve already endorsed Maggie Hassan for Senate in New Hampshire, who is running against incumbent Republican Kelly Ayotte, who voted against the post-Newtown background-check bill.

The group was heartened when the very first ad Ayotte ran this year was on guns, and she didn’t defend her vote—but rather pretended she backed the background-check bill. (The legislation referenced in the ad is actually a different Republican bill, widely derided by reformers as ineffective.)

This showed that the terms of debate on guns are changing. “For the first time in a long time, I think Republicans are very confused about what their position is on guns,” said Murphy.

Murphy confessed Tuesday he was initially unsure if his filibuster was even a good idea, and that he texted his wife right before taking the Senate floor to say he might be about to make a “big horrible mistake.” The so-called no-fly, no-buy legislation was denounced by civil-liberties advocates, but Murphy’s filibuster earned worldwide headlines and served as a “catalytic moment” in the evolving gu-control debate, he said.

House Democrats followed up days later by taking over the floor of the chamber, sitting down and refusing to move all night. Representative John Lewis, who helped lead that protest, encouraged the few hundred attendees at the Philadelphia rally to keep up the fight. “I want to thank each and every one of you for finding a way to get in the way,” Lewis said. “Making good trouble. Necessary trouble.”