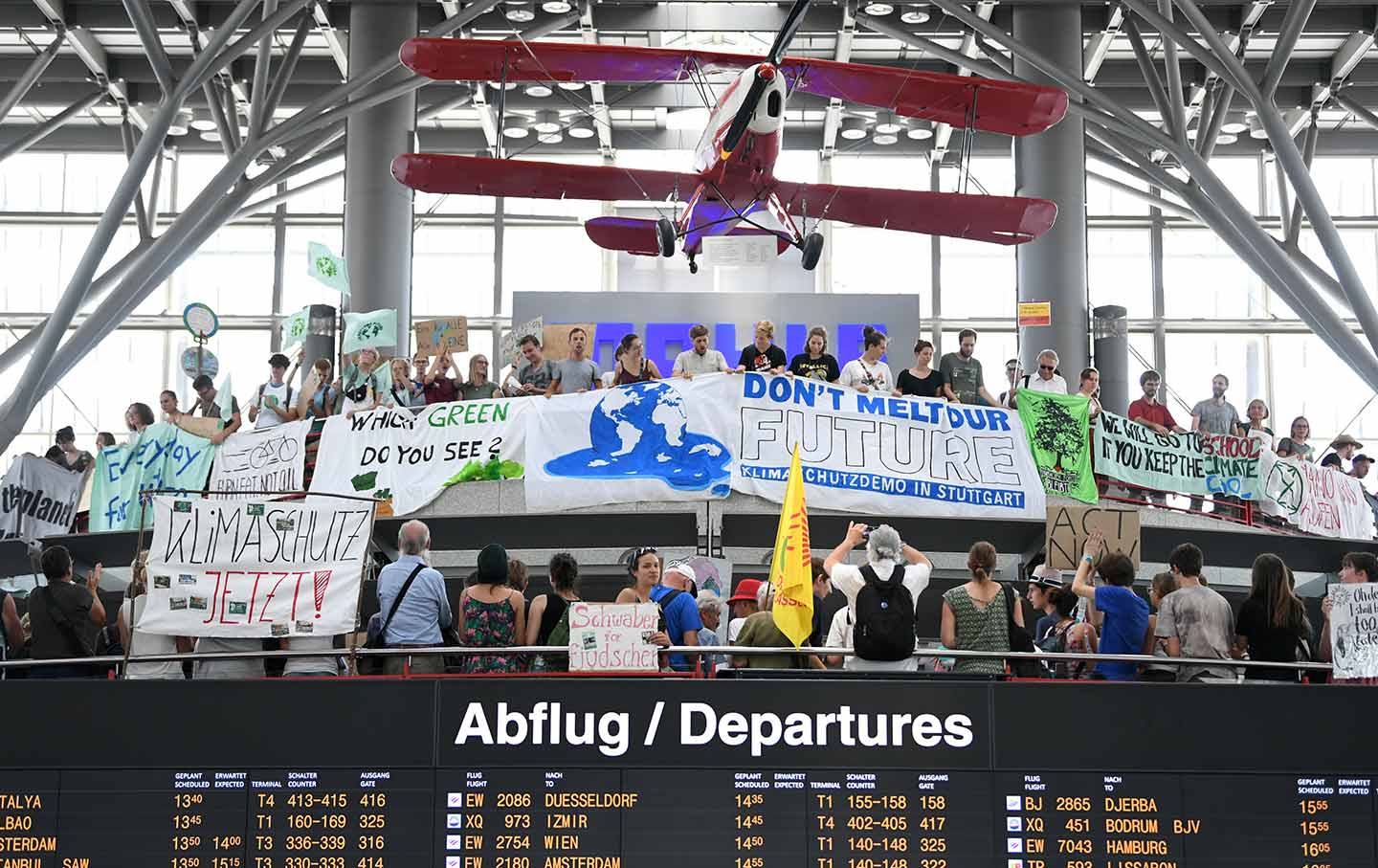 A “Fridays for Future” protest at the Stuttgart airport in Germany in July. (Reuters / Andreas Gebert)

In 2016, Malena Ernman, an internationally known mezzo-soprano from Sweden, put her career on hold. She was concerned about the environmental impact of all the flying she was doing—a sentiment that’s been widely publicized by her daughter, climate activist Greta Thunberg.

It’s now well known that Greta makes a point to travel to her engagements by rail or sea. In August, she sailed across the Atlantic to attend the UN Climate Action Summit in New York. After a stop in Iowa City, where she rallied with local students to end the use of coal at the University of Iowa’s power plant, she’s driving across North America—in a Tesla.

In Sweden, Flygskam, or flight shame, has become a significant phenomenon. In July, it fueled a 4 percent decline in passenger numbers at Swedish airports compared to the previous year, and the trend is catching on around the world. The Guardian recently highlighted several “no-plane pioneers,” including a man who took a nine-day cargo ship trip from France to Trinidad rather than fly; an op-ed in Bloomberg scolded readers, “You Don’t Have a Right to Cheap Flights”; and the Dutch airline KLM recently encouraged customers to fly “responsibly” (though, presumably, not too responsibly).

This activism is informed by data: Aviation is responsible for about 2.5 percent of carbon dioxide emissions worldwide, and these numbers are forecast to increase. And with a 2030 deadline to cut emissions—or face a global rise in temperatures by more than 1.5 degrees Celsius—it’s understandable that concerned travelers are asking themselves whether they really need to hop on that plane. But pressuring people to stay home, or invest in costly, lengthy journeys by rail or sea, is not how we ought to tackle the crisis of our warming planet.

Many environmentally minded progressives advocate for a low-consumption, low-impact lifestyle to mitigate the effects of climate change. “BirthStrikers” argue that it is unethical to have children; writer Naomi Klein speaks of the need to “contract” our consumption. This approach is hardly new: Back in 1968, the best-selling book The Population Bomb warned that unless we enacted immediate measures to curtail reproduction, overpopulation would doom the human race. But as Leigh Phillips, author of Austerity Ecology & the Collapse-Porn Addicts, points out, this sort of belt-tightening always falls most heavily on the people already struggling to get by.

Thunberg’s sailboat to New York, for instance, was a yacht copiloted by the grandson of a Monaco prince and Grace Kelly; her Tesla is on loan from Arnold Schwarzenegger. The symbolism of Thunberg’s lengthy journey clearly resonates, but in practice, it’s unrealistic for the vast majority of Americans.

Flight-shamers seem to forget, too, that many people may be traveling by air not for leisure but because they are immigrants visiting family overseas. They forget that to tell residents of places like Alaska, Hawaii, Puerto Rico, or Guam that they shouldn’t fly is akin to telling them they shouldn’t participate in mainland American life. Americans currently lack access to the extensive rail networks and generous vacation leave that would make lengthy journeys feasible. We’re the only advanced economy that doesn’t have guaranteed paid time off (Swedes get a minimum of 25 days). Investing in high-speed rail and instituting legal minimums for vacation time would benefit both Americans and the environment, but in the meantime, we still need a way to get around quickly.

Discouraging travel for leisure, too, seems especially wrongheaded today. The Trump administration has been rightly condemned for its isolationism, its repeated and ongoing disinclination to condemn white nationalism. Amid a terrifying rise in hate rhetoric and hate crimes, it’s more important than ever that we try to understand the world beyond our own borders.

Leisure travel can be deeply humanist, in that it allows us to discover other places, people, cultures, and ways of living. International travel also improves mental health, and often engenders a greater degree of openness and emotional stability, according to a 2013 study. Americans used to be mocked for their provincialism; that more Americans than ever have passports should be seen as a positive development. Shaming people for availing themselves of travel opportunities is another way of turning inward and isolating ourselves. If anything, the ability to travel should be extended to everyone, through expanded vacation time and higher wages.

None of this changes the fact that we must reduce emissions dramatically, and it is heartening to see how Thunberg and other young climate activists are inspiring millions to take action.

But given the scale of the crisis we face—given that oil and gas companies must cut their emissions by 55 percent, but instead are investing more than ever in fossil fuel production, given our continued dependence on coal—is the problem really people flying home for the holidays?

Now is not the time to shame people for making the most of their few days of vacation. Rather than flight-shaming each other into staying home, we must demand that our leaders commit to investment in clean energy with a Green New Deal. There are several possibilities for decarbonizing aviation, but they require costly research before they become feasible, and without public-sector investment, airplanes will continue to spew carbon dioxide into our skies.

Private companies are attempting to develop zero-emissions aircraft. One option is to use electrical power, but this requires larger batteries, which make only small, short-haul flights realistic. A private company, Zunum Aero, planned to create “hybrid-to-electric” planes, though it ran out of its venture funding from Boeing and JetBlue.

Another potential fix is aircraft powered by synthetic hydrocarbons, which are created by combining hydrogen produced from water, using process heat from nuclear reactors, and carbon dioxide drawn from the atmosphere. Unlike conventional hydrocarbons—which include petroleum, kerosene, natural gas, and coal—synthetic hydrocarbons are carbon-neutral. “It’s the most realistic option,” said Leigh Phillips in an interview. “Nothing has to change with planes’ internal combustion engines, and you don’t have to build new fleets.” Still, we can’t rely on the profit-motivated private sector to take on the expensive research this requires. We need substantial public-sector commitment, like the kind laid out in Bernie Sanders’s Green New Deal plan, which devotes $16.3 trillion to stopping climate change in its tracks. The plan sets a goal of achieving 100 percent renewable energy for electricity and transportation by 2030, and complete decarbonization by 2050.

This means, along with taking on the fossil fuel producers responsible for the bulk of emissions, devoting significant funds to the clean-energy research that will decarbonize flight.

There’s a lot of pressure on Americans to make virtuous, self-abnegating choices. Don’t use plastic straws, don’t eat meat, don’t fly anywhere, don’t have children: these imperatives all have something in common. They place the burden of solving climate change squarely on the shoulders of ordinary people. They imply that unless we decline to do things that might bring us great joy—like start a family, or experience the world beyond our own borders—we are responsible for the destruction of the planet. This, in turn, sets the scene for a reactionary backlash: President Trump is even selling his own plastic straws because “liberal paper straws don’t work.”

We are in serious environmental danger, but eco-austerity is not the solution. What we need to save our planet is abundance—beginning with major government investments from all around the world.