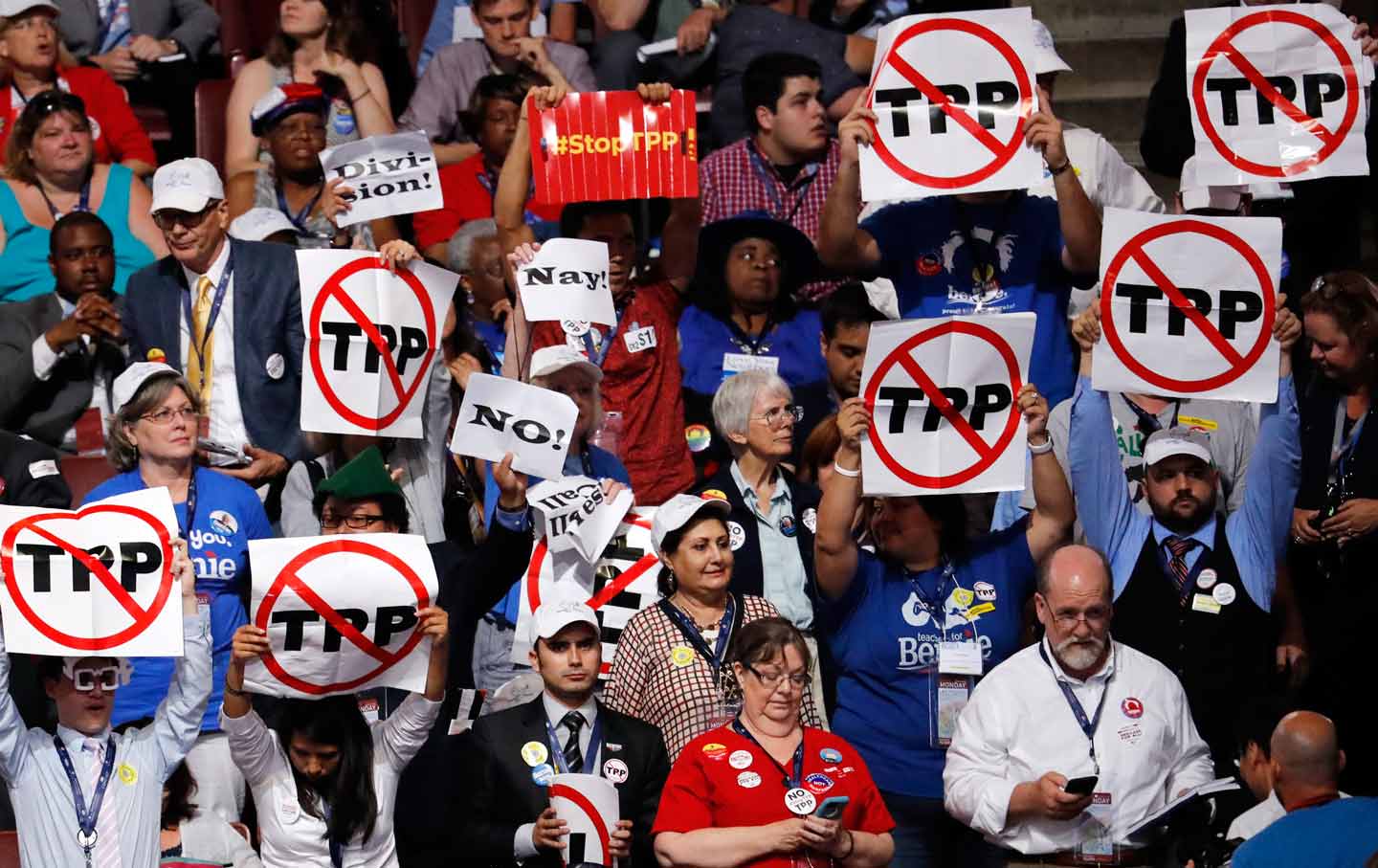 A protest against the Trans-Pacific Partnership on the first day of the 2016 Democratic National Convention in Philadelphia. (AP Photo / J. Scott Applewhite)

Trade policy in general—and the Trans-Pacific Partnership agreement in particular—has become a vital concern for Democrats up and down the ballot.

Just ask Wisconsin Congressman Ron Kind, one of the few congressional Democrats who continue to make arguments for agreements such as the TPP.

Kind, who has served almost two decades as the Democratic representative from farm and factory towns of western Wisconsin, did not receive a warm welcome from Wisconsin delegates to this month’s Democratic National Convention.

The headlines told the story:

“Protesters shout down Congressman Ron Kind over his support of TPP.”

At a point when Democratic Party leaders (including party presidential nominee Hillary Clinton) say they now recognize the reality that free-trade deals such as the North American Free Trade Agreement and the permanent normalization of trade relations with China have ended miserably—and that voters do not want another such deal, in the form of the TPP arrangement that is now being considered by Congress—Kind and a handful of so-called “New Democrats” continue to cling to the past.

“Wall Street and the political establishment have betrayed American workers for too long.” —Myron Buchholz

The congressman is still peddling the same sort of arguments that were once made for NAFTA and trade with China as he now tries to make a case for the TPP. But Wisconsin Democrats came to the convention in Philadelphia to support a pair of presidential candidates who spelled out their opposition to the TPP during the primary campaign.

Bernie Sanders made the issue central to his Democratic presidential bid, which swept Wisconsin and ran especially well in Kind’s district. “The Trans-Pacific Partnership is a disastrous trade agreement designed to protect the interests of the largest multinational corporations at the expense of workers, consumers, the environment and the foundations of American democracy,” said the senator from Vermont. “It will also negatively impact some of the poorest people in the world.”

Hillary Clinton, who won the nomination last week after a hard-fought race with Sanders, agrees that the TPP cannot go forward in its current form, and warns against efforts to pass it this fall in a lame-duck session of Congress. “I oppose the TPP agreement—and that means before and after the election,” said the former secretary of state.

Critics of the TPP such as Zephyr Teachout in New York and Pramila Jayapal in Washington have won open congressional primaries in recent weeks. And the dwindling circle of Democratic incumbents with records of support for free-trade agreements, such as Kind, are getting an earful from constituents.

Kind’s isolation on the issue was highlighted last year, when he was one of only 28 House Democrats who aligned with House Speaker Paul Ryan’s push for a move to “fast-track” consideration of the TPP and other unpopular trade agreements. The fast-track approach limits debate and input from Congress on trade measures. Though President Obama supported it, the vast majority of Democrats in the House and Senate opposed the fast-track scheme. They voted with Sanders, a longtime critic of the secrecy and backroom deals associated with trade policy, who said, “It is incomprehensible to me that the leaders of major corporate interests who stand to gain enormous financial benefits from this agreement are actively involved in the writing of the TPP while, at the same time, the elected officials of this country, representing the American people, have little or no knowledge as to what is in it.”

Despite all the evidence that the United States needs to radically alter its approach to trade, Kind keeps sounding the tired themes of a quarter-century ago, arguing that deals such as the TPP will eliminate “tariff barriers that make it harder for us to export.” But working people have seen that the restructuring of the global economy has actually made it harder to keep jobs in states such as Wisconsin, and in cities such as La Crosse, as multinational corporations move factories from country to country in a global race to the bottom on wages, environmental standards and human rights.

So when Kind spoke to the Wisconsin delegation at the convention, he was greeted with anti-TPP signs and chants of “No! No! No!”

It was a rough morning for the congressman. And the disagreement with his trade stance was not limited to Philadelphia. It is being heard in his home district.

Kind faces a primary challenge on August 9 from Myron Buchholz, a retired teacher and longtime economic- and social-justice activist from Eau Claire, who has made opposition to the TPP central to a thoughtful campaign that has focused on the connections between bad trade policies and rising poverty.

“The largest cities in the 3rd Congressional District are Stevens Point, Eau Claire and La Crosse. All three school districts now average 40 percent free and reduced lunch, with some elementary schools over 80 percent, and the trend is getting worse,” says the veteran history teacher.

No single policy can be said to have caused such an increase, but we have been promised prosperity from tax cuts and free trade agreements and that prosperity has not materialized for most people. Wall Street and the political establishment have betrayed American workers for too long. Jobs are gone and wages are down. For over 20 years trade agreements like NAFTA have sent American manufacturing jobs overseas.

The proposed Trans-Pacific Partnership is the largest free-trade agreement in history and will accelerate this trend. My opponent was a key player in the effort to give our president fast-track authority to negotiate the TPP, expediting the process, and undermining congressional oversight. I’ll oppose trade agreements that outsource jobs and hurt American workers and their families. You have heard that “freedom isn’t free,” well, free trade is not ‘free’ either; the costs are being paid by the poor and working class all across America.

Any challenge to an entrenched incumbent is difficult. Buchholz knows that. But with an energetic campaign that closed with a pre-primary “Buch the TPP” rally featuring populist Jim Hightower, he has made it clear that grassroots Democrats are no longer willing to give party elders a pass on the TPP.