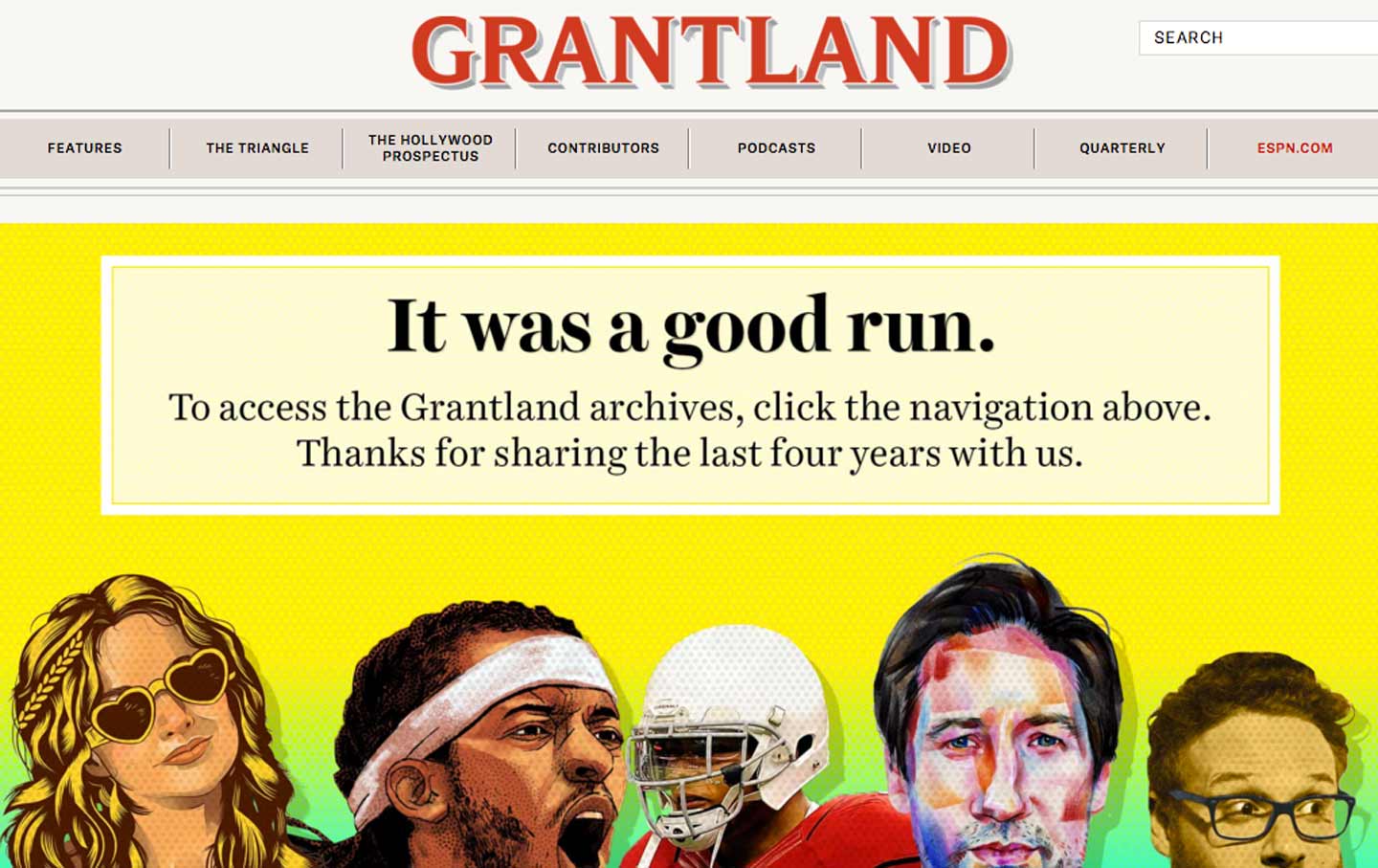 A genial windbag named Grantland Rice was the pre-eminent voice of America’s first golden age of sports, larding his newspaper columns, radio shows, speeches, and newsreel appearances with metaphors and pseudo-classical allusions that included this famous (though typical for him) lede: “Outlined against a blue-gray October sky the Four Horsemen rode again. In dramatic lore they are known as famine, pestilence, destruction and death. These are only aliases.” He was covering a 1924 Notre Dame football game.

A century later, in 2011, flush with the profits of another golden age, ESPN created a boutique website in its enormous souk for the current pre-eminent multi-platform performer, Bill Simmons. I had bad feelings when ESPN, apparently over Simmons’s objections, called it Grantland. The new site, after all, had edgy promise; it was going to be an innovative, diverse, literary grab-bag of pop culture takes, long non-fiction, and wonky but smart sports talk. Bill Simmons called his podcast the B.S. Report.

Last Friday, ESPN announced it was chopping this proud pinkie off its ham hand, only a few months after declaring its commitment to Grantland despite having just fired Simmons. Without its beneficiary and editor-in-chief, ESPN had no need for an entertaining and prestigious niche that made little or no money. Imagine if Playboy magazine, in its ’60s “class-and-ass” period, had kept the air-brushed nudes but dumped the Updike, Gordimer, and Baldwin short stories.

Without its editor-in-chief, ESPN had no need for an entertaining and prestigious niche that made little or no money.

The Internet reaction was mostly outrage lost in the busiest weekend of the sports calendar. The shrewd timing was vintage ESPN, an important revenue source for The Walt Disney Company (Hearst also has a 20 percent share). ESPN is currently besieged by the rising cost of buying the rights to show sports events, the declining profits in audience fees and advertising revenue as people cut their cable cords, and Disney-ordered budget cuts. Earlier last week, ESPN had laid off more than 300 employees. It was facing an annual $1.4 billion bill for NBA rights alone. Perhaps that made it too hard to justify maintaining its class act.

But Grantland represented more than just another media contraction. Sports is a stealth definer of social values, particularly among young people, and ESPN, the self-described World Wide Leader, is sports’s 24/7 purveyor on countless radio stations, TV channels and websites. How ESPN covers (or fails to cover) gay and transgender athletes, concussions, domestic abuse, gambling costumed as fantasy leagues, and e-sports, for example, will have an impact on how Americans regard the widening racial, economic, and class divides between them and the gladiatorial castes that perform for them.

Grantland’s unconstricted willingness to tackle topics that afflicted ESPN’s business partners—especially the NFL and the NBA—was a beacon in a sludge field. Fine writers like Bryan Curtis, Holly Anderson, Wesley Morris, Rembert Browne, and Molly Lambert were able to make connections between sports and pop culture that were rarely made elsewhere. Their writings turned college students on to journalism. One shining legacy of Grantland was proving that its audience would read 10,000-word stories on their screens; the so-called long form has been taken up all over the Internet.

Grantland’s generational fief was not the same as ESPN’s radio, TV, and digital audience. The mail I’ve received from the network’s consumers, over my past two years serving as ESPN’s ombudsman, may have come from two different planets.

The Grantland audience seemed to be primarily a white male millennial who felt that Bill spoke for him. I came to appreciate Simmons’s breezy style, if not his self-referential bravura; his navel was the true arena and all events were seen through his reactions to them. I was too old and traditional a sportswriter for that, but the millions who followed him seemed almost cultish in their belief that Simmons actually spoke truth to power. When I criticized Simmons for calling NFL Commissioner Roger Goodell a liar without at least some video of his pants on fire, I was inundated with e-mails proclaiming Simmons’s gut the only evidence he needed. In that same dust-up, Simmons dared ESPN’s president, John Skipper, once his main booster, to punish him for speaking his mind. Skipper suspended him and eventually went on to win the battle of egos by firing him last May. Simmons moved on to HBO.

Meanwhile, the regular ESPN audience, usually complaining to me that “social issues” were invading the games, was typically a middle-aged Southeastern Christian who regarded sports on his family room TV a sanctuary from the real world. Last year, when Michael Sam became the first openly gay player drafted by the NFL, ESPN cameras lingered long on the celebratory kiss he gave his boyfriend. My e-mail exploded. Viewers felt betrayed by “liberal” ESPN for “promoting the homosexual lifestyle to my children.” It was impossible to explain that ESPN, which has no moral center, was in many respects merely selling itself with provocative clickbait.

In recent years, ESPN’s journalistic integrity has taken justified hits for its slow response to stories that reflected poorly on star players; for broadcasting The Decision, a selfie for LeBron James when he left Cleveland for Miami; and for removing the company’s brand from a joint enterprise with PBS on the documentary League of Denial, which covered the most important sports story of our time—the deadly concussions in the NFL and the accompanying cover-up. On a daily basis, ESPN’s main energy seems directed toward cranking out trade rumors and speculation about coaching changes to keep fans engaged, while its top broadcasters engage in squabbling packaged as debate. An attempt to launch a Grantland-style site devoted to African-American sports issues has been mired in what seems like bad faith and subversive mismanagement.

Now without Grantland, ESPN is left with a modern version of its namesake’s four horsemen—cliché, scuttlebutt, squawk radio, and conflict of interest.

Update: Re-reading my piece, I realized that not everyone has read all the praise I’ve heaped in other places on the ESPN program Outside the Lines or the investigative unit, especially the work of the Fainaru brothers and Don Van Natta. They shouldn’t feel slighted. They, too, are beacons in a sludge field.—Robert Lipsyte