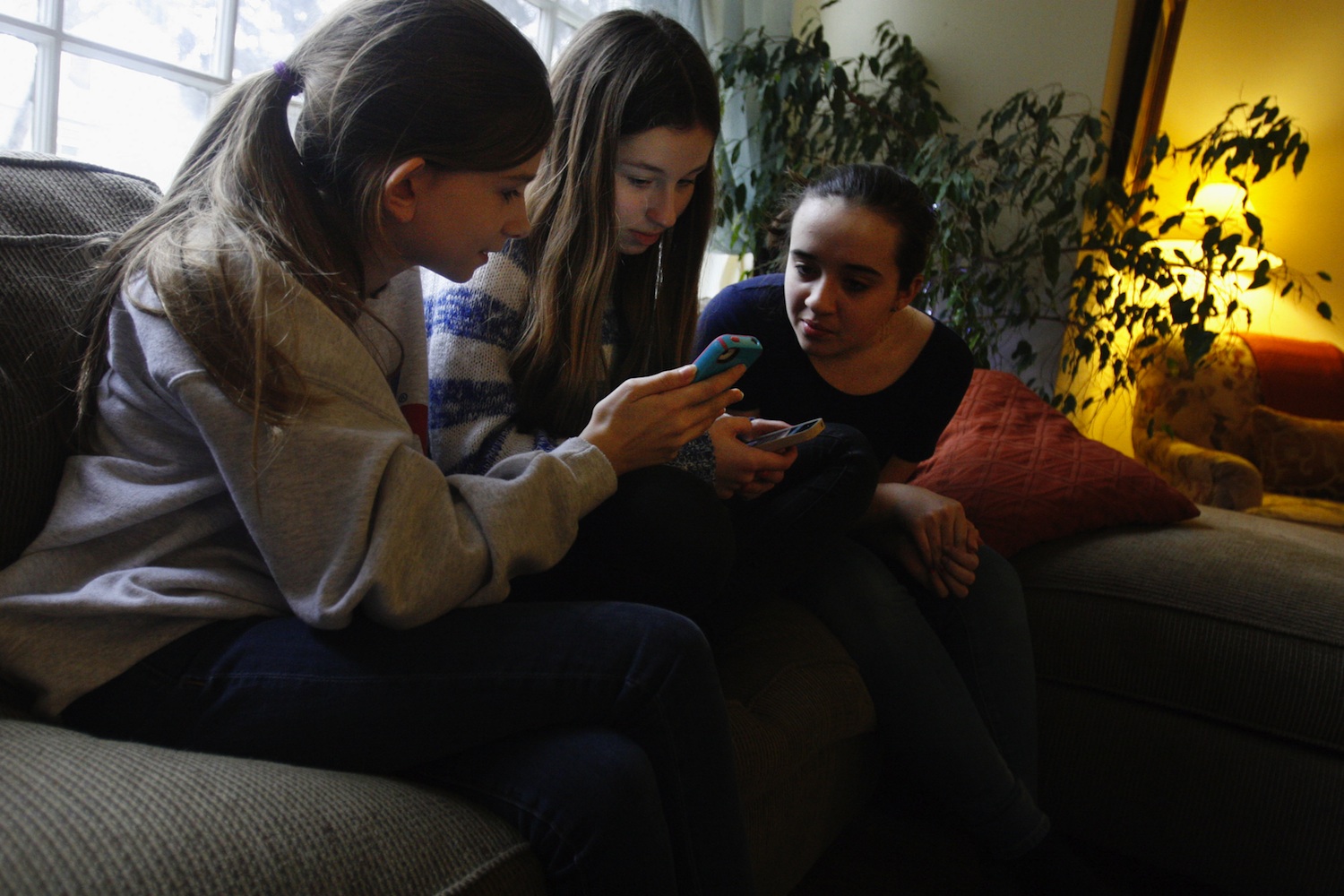 In the chaotic script of a rising eighth grader, Frankie Lindsay’s notecard, written in preparation for a meeting with her school’s principal, read: “This school’s policy is one of the reasons why the US has the 6th highest rate of rape in the world.” Lindsay, along with three of her friends, was getting ready for a conversation with Principal Joseph Uglialoro about the way South Orange Middle School in New Jersey enforced its dress code. Although the code—mandating that shorts and skirts must be at fingertip length and forbidding “attire that exposes undergarments or anatomy”—is more or less common, Lindsay and her friends say that the way that the administration pushed the issue in mass e-mails to their parents and over the loudspeaker during morning announcements made them very uncomfortable.

With rising recognition, the girls realized that they did not appreciate being told, repeatedly, that their bodies were distractions to the school environment and required stringent regulation. In a June 2014 e-mail sent to South Orange-Maplewood Superintendent Osborne, local parents spoke out: “At South Orange Middle School, Principal Uglialoro has written that, ‘Dress code continues to be a concern, specifically with our female students,’ in all three of his e-blasts for the month of May. Additionally, in his May 19 e-mail, he alludes to the reason behind enforcing the dress code, as to a possible interference with establishing and maintaining a ‘learning environment.’ This begs the question of whose ‘learning environment’ is being prioritized, and at whose expense.”

The parents’ letter also noted with distress that girls are removed from instructional time and report being publicly shamed because of what they wear to school. In response to the frequent warnings about dress code enforcement, Lindsay and her friends formed the group #Iammorethanadistraction to raise awareness about what it means for a middle school girl to be told that her appearance is frustrating her learning environment. Ava Emilione, a member of the group, elaborated, “We shouldn’t be responsible for other people’s actions. When the school board is telling a girl that she has to dress a way so she won’t be distracting, that’s telling a girl that she needs to change herself, to make sure she’s not distracting. We are more than distractions to boys and the school environment.”

#Iammorethanadistraction is just one facet of a greater movement among young female students. Young women are fed up with being pressured to curate their appearance and, by extension, others’ potentially lecherous thoughts about them—especially when young men are so much less likely to be called out for dress code violations.

When Haven Middle School in Evanston, Illinois, banned leggings and yoga pants, 13-year-old Sophie Hasty spearheaded a petition to reverse the ban. The Evanston Review reported that a horde of young girls showed up wearing leggings in protest, holding signs that read, “Are my pants lowering your test scores?” In a letter to the Haven administration, parents wrote, “Under no circumstances should girls be told that their clothing is responsible for boys’ bad behaviors. This kind of message lands itself squarely on a continuum that blames girls and women for assault by men… If the sight of a girl’s leg is too much for boys at Haven to handle, then your school has a much bigger problem to deal with.”

Students at Morris Knolls High School in New Jersey, Kenilworth Junior High in California, Duncanville High School in Texas and even New York’s prestigious Stuyvesant High School have issued complaints about their dress codes, many of which have resulted in full-on protest. Stories of girls being harassed, sent home, shamed or asked to change into ill-fitting gym clothes in lieu of what they came to school in are commonplace on Tumblr, and are rapidly becoming more prevalent on Twitter. Young women around the country are arguing that the school’s reaction to a woman’s appearance is more distracting than her appearance itself and that it is unfair to be told that their attire frustrates the school’s goal to educate. On a more extreme scale, this philosophy of blaming women’s attire for men’s behavior toward them echoes what many call “rape culture:” a term describing, in part, the likelihood that a woman will be blamed for her rape.

The constitutionality of dress codes is attributed to the Tinker vs. Des Moines School District Supreme Court case. In December 1965, students in Des Moines, Iowa wore black armbands to protest the United States’ involvement in the Vietnam War. Christopher Eckhardt, 16, John Tinker, 16 and Mary Tinker, 13 wore their armbands to school religiously with the support of their parents. But on December 14, principals and administrators of Des Moines schools met and together resolved to rid the schools of this disturbance. If any student were to arrive wearing an armband, they would be asked to remove it. And if they refused, they would be suspended.

Tinker, Tinker and Eckhardt refused and were suspended. A formal complaint was filed under § 1983 of Title 42 of the United States Code. The District Court’s opinion, however, was that the school “upheld the constitutionality of the school authorities’ action on the ground that it was reasonable in order to prevent disturbance of school discipline.” The case established, or at least sketched out, guidelines by which schools could juggle appropriate discipline and students’ right to free speech.

And when girls violate dress codes, schools do tend to focus on discipline. Nefertiti Martin, Community Organizer for New York-based Girls for Gender Equality, has been looking at harsh discipline in public schools. She thinks that girls who are taken out of class, given something else to wear or suspended for their style choices should be treated far more respectfully. “More often than not, the school system works in a disciplinary realm as opposed to being transformative, a learning opportunity. People do a lot of punishment without explaining why, or without a clear understanding of the roots of the problem.” Martin points out that when she facilities workshops with school officials, they often do not even know how to talk to students about sexual harassment largely the result of lack of training.

But disciplining young women for dress code violations has repercussions far more troubling than embarrassment or missing educational time. Placing such strong emphasis on young women’s bodies may play a large part in their self-definition, their perceptions of themselves as sexual objects. The American Psychological Association’s Task Force on the Sexualization of Girls holds that “Sexualization occurs when a person’s value comes only from his or her sexual appeal or behavior, to the exclusion of other characteristics.” Self-objectification, to the APA, occurs when girls “learn to think of and treat their own bodies as objects of others’ desire.” In essence, focusing so much attention on a young woman’s sexuality—the visibility of her legs, her bra straps or midriff—teaches her that these things are of major importance to others; therefore, they should be of major importance to her. Compromised school performance, lowered self-esteem, anxiety and eating disorders are just some of the consequences that follow.

Of course, it’s not just schools that are pushing young women to frame themselves as sexual objects. But while larger cultural pressure for young women to self-objectify is steady, it is absolutely imperative to note that girls—young girls—can understand and control the implications of their appearance. Girls and boys experiment with their aesthetic as they search for their place among their peers, and more importantly, for who they are as individuals. Niv Miyasato, proud father of Lily Kirschner of #Iammorethanadistraction, underscores this point: “Honestly, I think that Lily and her friends are very aware of the choices they make. I feel that they have their own sense of what’s appropriate for them and what’s not. They self-edit. They’re not mindless consumers of what’s presented to them—they’ve seen all of this since they were little… To say they don’t have choices, that we’re just blind victims of consumerism, is not true … It’s when people impose their choices on other people, that’s when there are problems.”

All girls interviewed emphasized that when they choose to wear revealing clothing, they do not do it primarily—or often at all—for the attention of their male peers. They want to feel good about themselves. According to Nathania Fields, a rising senior at Campus Magnet High School in New York: “I think a lot of the time girls wear what they wear to feel more confident in themselves. The attention from men is, I don’t know, extra.”

Comfort is also key: Sophie Hasty argued that her school should allow leggings because they are comfortable and low-maintenance. Fields, who says her high school does not turn on air conditioning until the last week of school, also stressed comfort: “A lot of the time, girls are like, ‘I buy my clothes. You don’t. It’s 90 degrees outside and you don’t have AC because you’re cheap. What am I supposed to wear… If it’s hot in the building, I’m gonna wear some shorts and you’re gonna leave me alone or put on some AC.”

Next step for the girls involved in #Iammorethanadistraction is to help create a space designated for young men to have candid conversations with parents, teachers and young women about how they view women’s bodies, and how their behavior can negatively impact young women. Martin said that young men are often surprised that, if a woman is wearing revealing clothing, she is not asking to be approached in a certain way. Fields elaborates, “We have to tell guys that just because a girl is wearing a short skirt doesn’t mean she wants you. I’ve heard guys say that there are females who wear short skirts and females who don’t, and the ones who do, those girls are thots [sluts].”

Girls around the country are speaking out against casual expressions of systematic sexism in the classroom. But despite widespread pushback against dress code enforcement, the issue is merely the face of a greater struggle: Emilione comments, “It’s not about the clothes, really. I could care less that I have to wear longer shorts. But it’s about the implications and the bigger message of the dress code—the message on the loudspeakers: ‘For all you ladies out there!’”