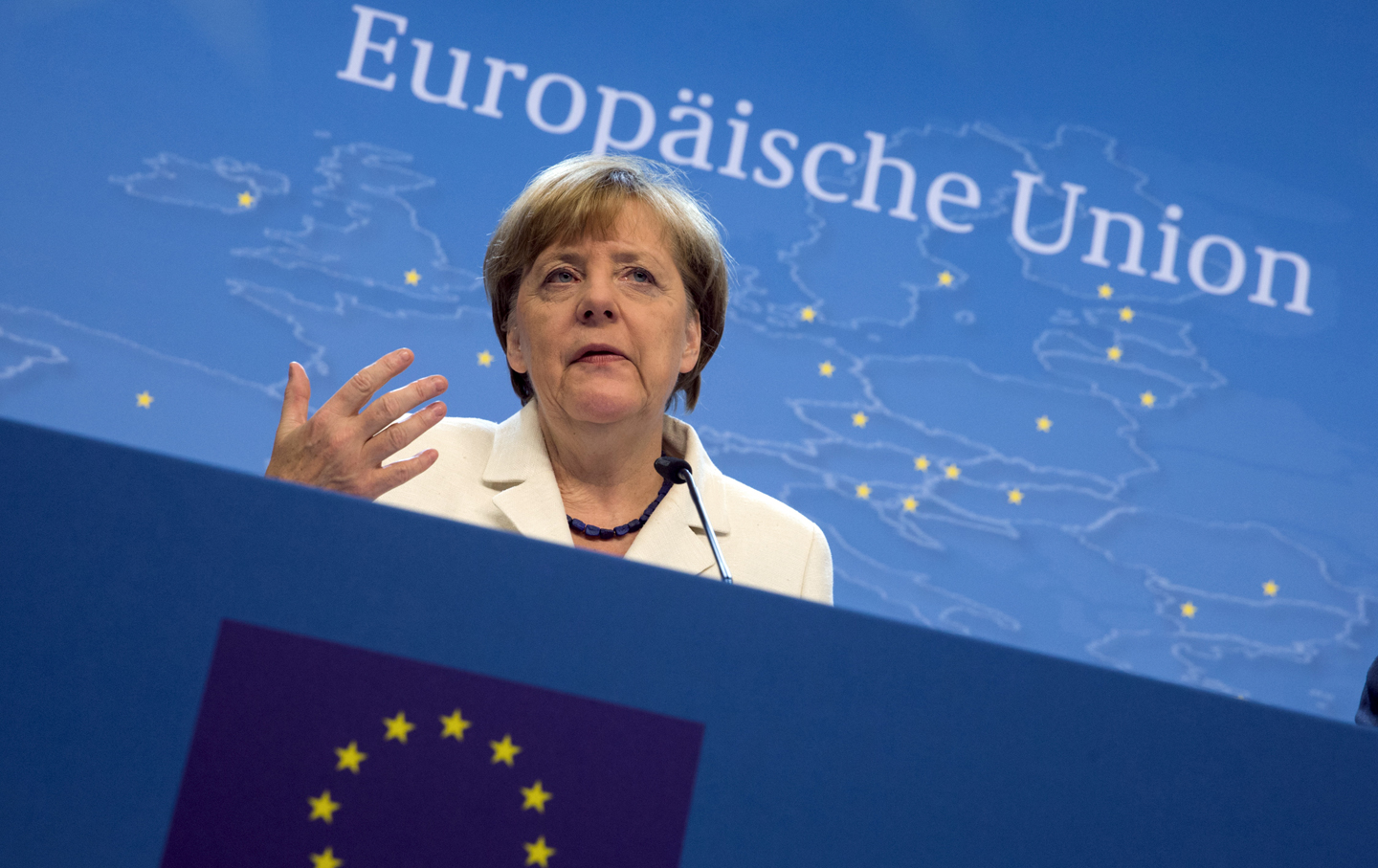 On Sunday night, as European leaders bargained over a third Greek bailout, the hashtag #ThisIsACoup began trending worldwide to protest the extreme conditions of the deal. If Prime Minister Tsipras pushes the agreement through the Greek Parliament, Greece will receive a bailout package of up to 86 billion euros, in exchange for stricter austerity measures than those the nation rejected in their July 5 referendum. Backlash has largely been directed at Germany, who some see as hypocritical for insisting on such a harsh package: Thanks to the generous 1953 London Debt Agreement, Germany itself never repaid much of the massive debt it incurred in reparations from both world wars. In April, Deputy Finance Minister Dimitris Mardas even claimed that Germany owes Greece 278.7 billion euros in war debt for the 13 percent of the population lost during the Nazi occupation. This sum would allow Greece to clear nearly all of its existing debt, though German Vice Chancellor Sigmar Gabriel said that there is “zero possibility” of Germany ever making such a payment.

“I won’t take part in historical comparisons, especially when I didn’t make them myself.” — Angela Merkel

When asked about any similarities between the current bailout deal and the Treaty of Versailles, whose harsh reparations created a climate of unrest in Germany that arguably paved the way for Hitler’s rise to power, German Chancellor Angela Merkel responded: “I won’t take part in historical comparisons, especially when I didn’t make them myself.” Yet it is difficult to avoid historical comparisons here, considering European leaders’ benevolence toward Germany in 1953 and their relative lack of sympathy toward Greece today.

How does the 1953 debt agreement in Germany compare to that in Greece today?

The London Debt Agreement of 1953 cancelled over 50 percent of West Germany’s debt, reducing it from 200 to about 20 percent of the nation’s GDP. Germany also received an additional $1.45 billion (approximately $7.3 billion today) from the United States under the Marshall plan—four times more than Greece got.

Greece’s debt currently stands at 180 percent of its annual GDP. The bailout on the table would not cancel any of this debt, but would cover at most 28.7 percent with loans. Greece would have to pay off its remaining debt in part by privatizing 50 billion euros’ worth of assets, which could include its prized islands and historical sites. These assets will be sequestered in an internationally overseen fund, with 25 percent going toward continued investment in Greece.

How do the conditions of debt relief or bailout compare?

Per the terms of the 1953 agreement, West Germany was to stagger the repayment of its remaining debt—about 15 billion deutsche marks—over the following three decades. Indeed, the country made its final payment as recently as 2010. The London Debt Agreement stipulated that Germany was only to make payoffs through trade surplus, and that repayments should not exceed more than three percent of annual export earnings. The nation’s creditors had to buy West German products in order to have their debt repaid; they also allowed Germany to undervalue its currency for several years following the 1953 agreement to facilitate a booming export market. As a result of these favorable conditions, Germany’s economy thrived.

The proposed deal requires that Greece agree to a number of reforms and austerity measures, harsher than those rejected last week by over 60 percent of voters. These include pension cuts, budget cuts, tax increases, and labor-market reforms to relax union controls; Greece would also be expected to embark on a short-term economic stimulus plan that would entail, among other things, the privatization of power companies. There would be no changes to the timeline of Greece’s debt repayments, including payments due late-July and mid-August to the European Central Bank totaling 12 billion euros. Payments from Greece are not tied to growth, but must be made even if the economy is contracting.

What negotiating power did each nation have?

Germany rejected a first draft of the 1953 debt relief treaty, claiming that it gave too much power to its creditors. Subsequently, in the final version of the agreement, Germany was treated as an equal power with its creditors.

In the July 5 referendum, 61 percent of Greeks rejected the terms of the proposed bailout. A week later, under relentless opposition from creditors, Tsipras agreed to the new bailout terms, which are harsher than those the referendum refused.

Were there political or economic incentives for forgiving the debt?

By the 1950s, West Germany was already an important geopolitical player, particularly given its position in the Cold War. It was in the Western bloc’s best interests to ensure its continued economic growth and political stability; with the favorable conditions set by the London Debt Agreement, Germany ascended to a seat of global economic power, comprising about 30 percent of the eurozone’s GDP today.

Greece, by contrast, makes up just about 2 percent of the eurozone’s GDP, and has the highest percentage debt to GDP among euro nations. In order to rebound economically, according to analysis from the IMF, Greece would have to bring its labor supply, employment rate, and productivity growth up to German levels in the next year. Given that Greece currently ranks toward the bottom on all three counts among nations in the eurozone, this will be no piece of cake. And though some see a risk of increased austerity leading to a rise of neo-Nazism in Greece, there seems to be no immediate incentive for European leaders to forgive a portion of Greek debt in a manner as generous as the London Debt Agreement’s.