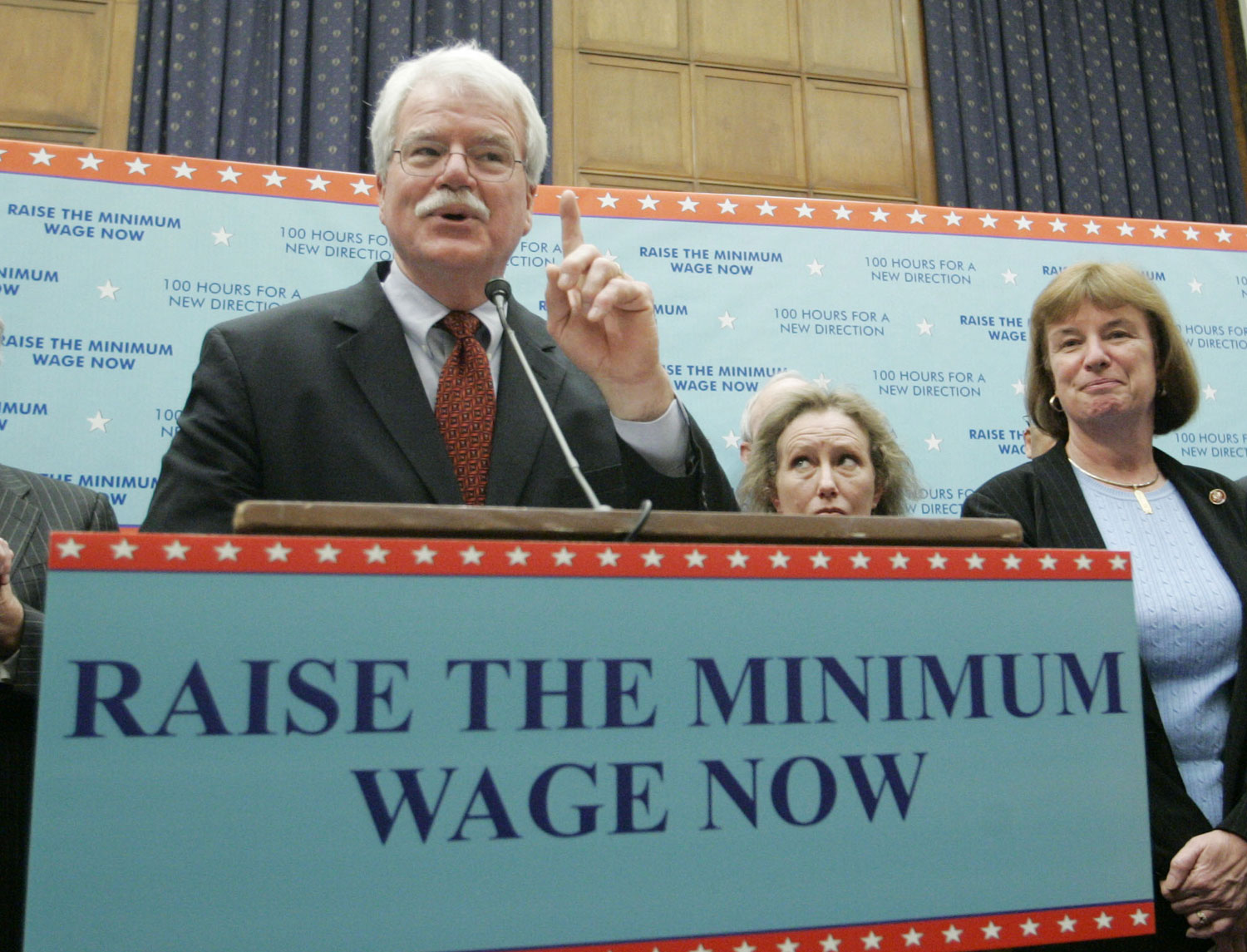 Congressman George Miller, D-California, during a news conference on the bill to raise the minimum wage (AP Photo/Pablo Martinez Monsivais)

Like his friend and frequent legislative partner in the US Senate, Ted Kennedy, George Miller made himself an essential Democrat in the House of Representatives on the issues that mattered most to his party’s historic base. For decades, as a senior member of California’s influential House delegation, Miller has led the fight for living wages, strong unions, public education, national healthcare, environmental protection, civil liberties and civil rights.

A quarter century ago he helped a newly elected congresswoman from a neighboring district, Nancy Pelosi, learn the intricacies of the Capitol, and he remained her steadiest ally as she rose to become the Speaker of the House. And Pelosi was not alone. The congressman continues to serve as a definitional figure on the issues of consequence for progressives, and as a mentor to the members of House who identify as their champions.

But Miller says he “was never in awe of the ‘indispensable man’ theory.”

So, at the end of his current term, the 68-year-old congressman will end his forty-year tenure in a House of Representatives that he entered as a 29-year-old “Watergate Baby”—part of the remarkable class of young, liberal Democrats who were elected after Richard Nixon’s resignation in 1974 and made the ideals of the antiwar, civil rights and political reform movements a part of the governing process in the 1970s and beyond.

Ever the fighter, Miller did not merely look backward in his retirement announcement.

“I’m proud of what I have been able to accomplish on behalf of children, working people and the environment, in my district and for our country, especially passage of national health care reform,” he declared. "Now, I look forward to one last year in Congress fighting the good fight and then working in new venues on the issues that have inspired me.”

At the top of the list for the coming year is the fight for a meaningful increase in the minimum wage, an issue where Miller staked out the high ground when too many others were content with small steps. It was Miller who proposed—with another retiring Democrat, Iowa Senator Tom Harkin—to break the double-digit barrier and raise the federal minimum wage from $7.25 an hour to $10.10 an hour. Showing the sophistication he has developed as the senior Democrat on the powerful House Committee on Education and Labor, Miller’s bill includes provisions to index future increases to keep up with inflation, and to expand protections for workers who rely on tips. In advocating for the legislation, the congressman has embraced the struggles of striking fast-food workers and others who argue that there is something wrong with an economic arrangement where Americans who work a 40-hour week are still stuck in poverty.

In his last year as a congressman, Miller will continue to serve as the environmental watchdog that he has been since even before his stint as chairman of the House Committee on Natural Resources as a congressman of conscience on international human rights issues; as a savvy advocate for early-childhood education who focused on the reform of the No Child Left Behind Act and college affordability; and as a challenger of Democrats and Republicans who seek to extend failed trade policies. Above all, Miller will keep advocating on a host of issues relating to income inequality that have suddenly become “hot” topics in Washington but that have been at the heart of his agenda since coming to Congress. As Miller says, “Wealthy and powerful special interests have always had friends in Washington. I came to Congress to stand up for the rest of us.”

Late last year, The Nation’s annual “Progressive Honor Roll” identified Miller as the most-valuable member of the House. We said at the time that, after four decades in the House, he was as energetic and effective as ever. We also noted that, though he was an essential Democrat, "Miller did not simply toe the Democratic line; he opposed President Obama’s proposal to fast-track the corporate-friendly Trans-Pacific Partnership trade deal. And he was superb on an issue most members of Congress rarely recognize: after a Bangladeshi garment factory collapse killed more than 1,100 workers, Miller denounced US retailers that have ‘led this race to the bottom over many years,’ telling corporations like Walmart that they “have to make a decision now whether you want to have blood on your labels.”

Miller would be the first to point out that there are other members of Congress who are willing to call out corporations—and presidents of both parties. In his retirement remarks, he celebrated the energy of freshman Democrats, and he went out of the way recently to find a place for one of the progressive of their number, Wisconsin Congressman Mark Pocan, on the Education and Labor Committee.

But the truth is that there can be indispensable men and women.

And George Miller has been one of them.

The Senate has survived without Ted Kennedy. But we ought not underestimate the significance of that loss.

The House will survive without George Miller. But we ought not underestimate the significance of this loss.

It is simply true that, as United Food and Commercial Workers union president Joe Hansen said: “Many will seek to carry on Congressman Miller’s good work, but no one can ever replace him.”