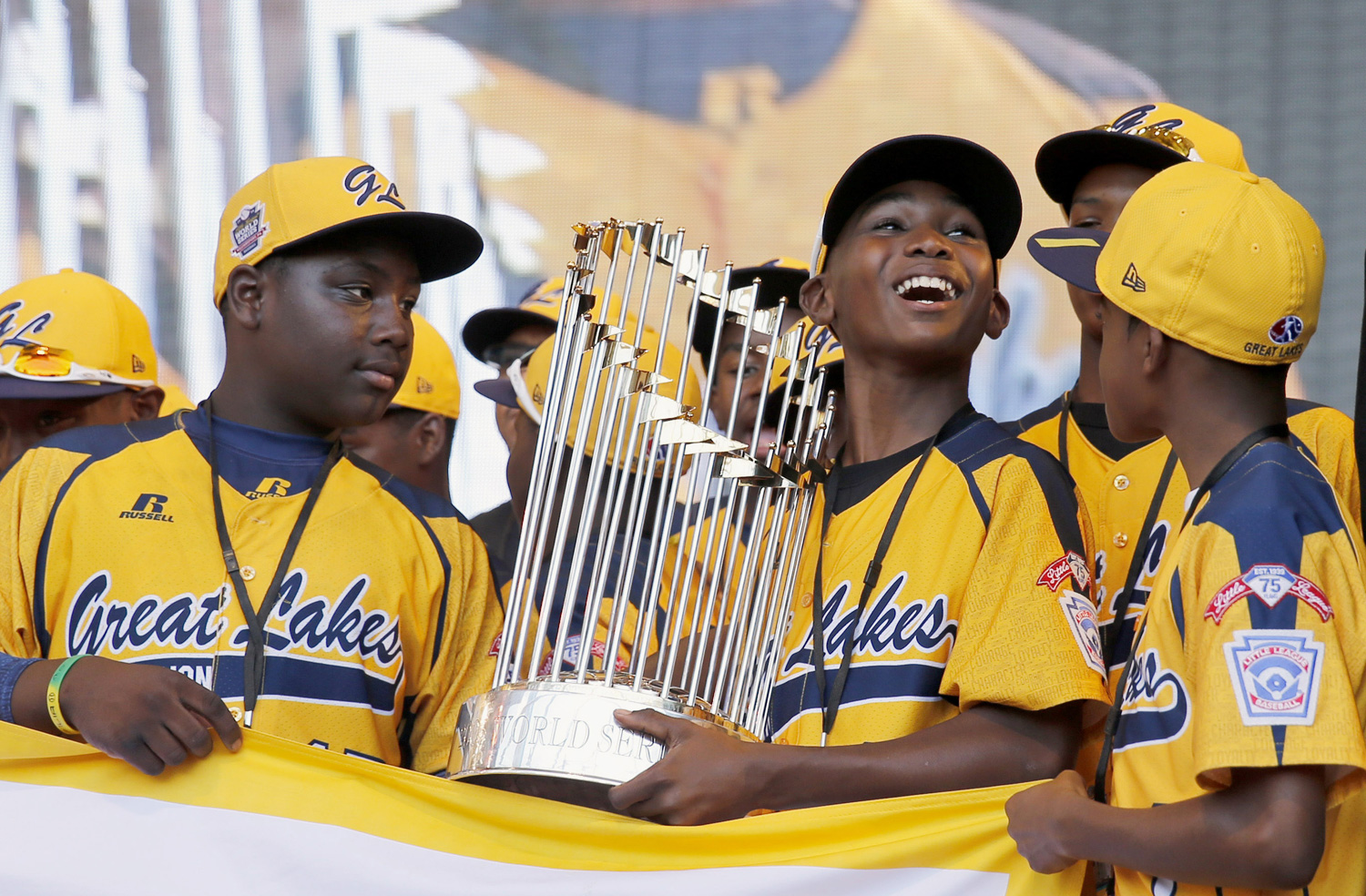 The fact that United States Little League baseball champs Jackie Robinson West have been stripped of their 2014 title, for using “players who live outside the geographic area that the team represents” is a slap in the face to everyone trying to keep baseball, a sense of community and even public education alive in the cities of the United States. This would read like scabrous satire from the pen of a writer whose DNA was part Runyon and part Baldwin if not for the fact that there are very real children being victimized by this decision in the city of Chicago.

But before we dissect just what exactly is so pugnaciously ignorant about the actions of Little League Inc., a brief request for sportscasters like ESPN’s Karl Ravech to refrain from further comment. This morning, Ravech tweeted, “Beyond unfortunate that few in JRW Little League deemed winning at all costs outweighed fair play. Kids caught in middle of childish adults.”

ESPN both through game broadcasts and breathless SportsCenter coverage of the Little League World Series has made the conscious choice to be a cog in the professionalization of youth sports. They are obviously not alone in this, but anyone who monetizes the amateur experiences of children and then gets moralistic about those breaking the rules needs at bare minimum to choose silence as this story unfolds. These are kids, and the intensity that surrounds this story is partially a function of ESPN’s choice to cover Jackie Robinson West like they were the 1998 Yankees. It would be a better look for Ravech and company to either not comment or own their complicity.

As for the decision itself, ironies abound. Jackie Robinson West was the first entirely black team to represent the United States in the Little League World Series. And yes, waiting until Black History Month to strip JRW of their title is at best tin-eared. But that insult shouldn’t blind us to the greater injury. Recall their damnable offense: Jackie Robinson West didn’t use 16-year-old ringers or cork their bats. They had players suit up who lived “beyond their geographical boundary.” The fact that the adults in charge of JRW felt the need to breach this rule perhaps has something to do with the fact that today’s urban landscape supports baseball about as well as concrete makes proper soil for orchids. A plurality of Major Leaguers is made up of people from either the US suburbs or the baseball factories of the Dominican Republic. Many of the few African-American players on Major League rosters actually come from the suburbs. This is because twenty-first-century neoliberal cities have gentrified urban black baseball to death. Boys and Girls Clubs have become bistros. Baseball fields are condos and in many cities, Little League is non-existent. The public funds for the infrastructure that baseball demands simply do not exist, but the land required for diamonds are the crown jewels of urban real estate. That’s what made JRW such a profound anomaly. In Chicago particularly, which under Mayor Rahm Emanuel has seen school closures and brutal cuts to physical education programs, their success made people believe that—with apologies to Tupac—flowers could in fact grow in concrete.

I reached out to Chicago Teachers Union Vice President Jesse Sharkey who said to me, “Mayor Rahm closed half a dozen schools in Jackie Robinson West’s part of the city, and tried to close the school, Marcus Garvey, where the founder of JRW—Joe Haley—worked. Then Chicago Public Schools cut funding for high school freshman sports, laid off a thousand teachers. CPS put forty kids in physical education classes and doesn’t even put a librarian in most of the school libraries in [the South Side district of] Auburn Gresham.”

As for the Little League seizing JRW’s championship, Sharkey said he stands with the statement of Chicago Teachers Union President Karen Lewis, who said, in part:

To strip Jackie Robinson West of its title nearly six months after securing the win tarnishes the efforts of our children who have dodged bullets, school closings and reductions in their school athletic programs in order to compete and win on the playing field…. I remain proud of our students securing their place in history as the first all-African-American Little League team to win the coveted Little League national championship. It is not lost on my community that they are named for a sports and civil rights icon that also had to break down barriers of racial hatred, segregation and the 1 percent’s total disregard for his right to exist as a human being. Jackie Robinson West should retain its title, be issued an apology, and every player should receive full-ride scholarships for college sponsored by the people who have humiliated these boys, their families and their community.