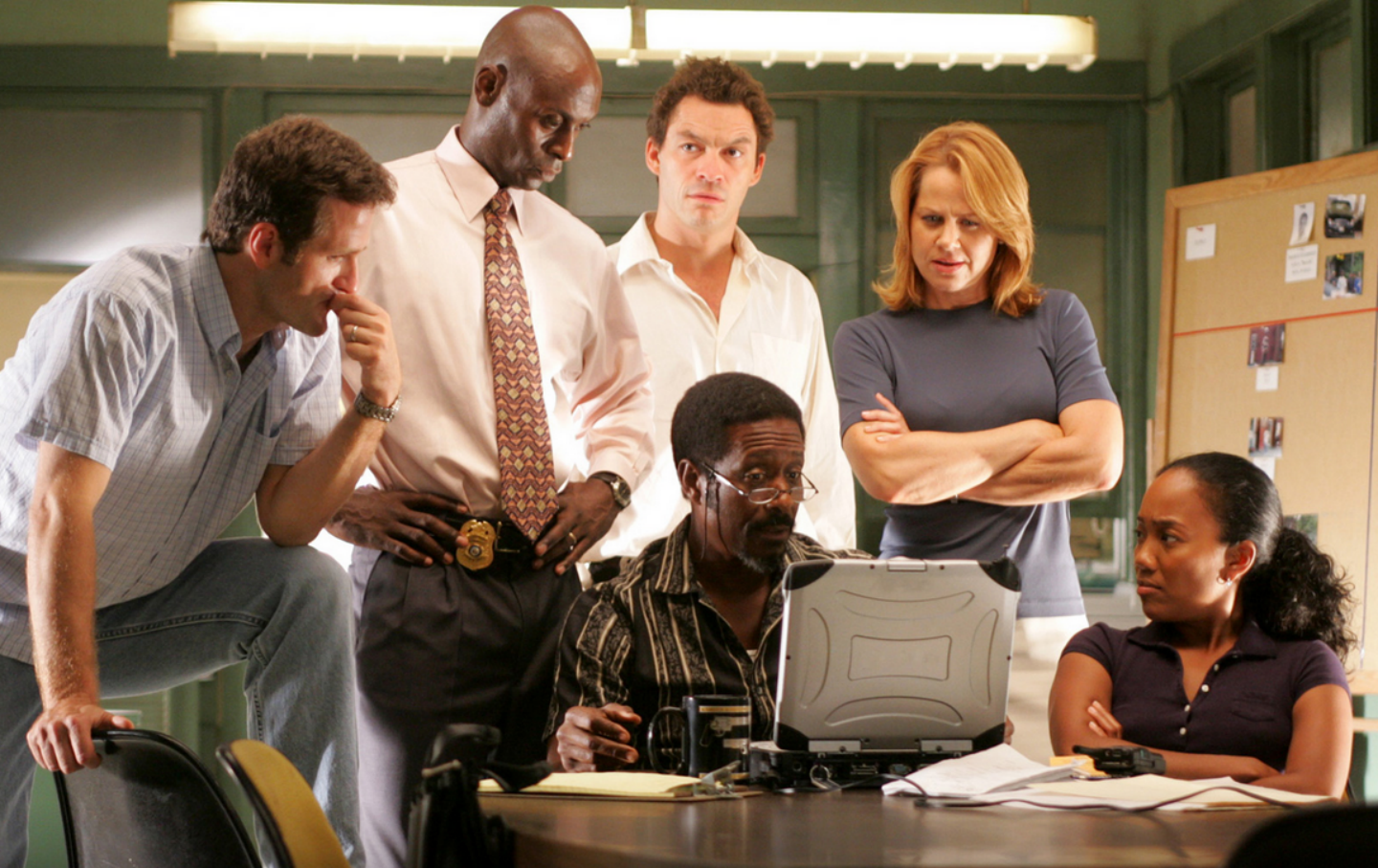 I fanatically loved HBO’s Baltimore-based television drama, The Wire. It’s difficult to even imagine my pop-cultural brain without the presence of Omar Little, Stringer Bell, Bunk, and “McNutty.” When I started doing my sports radio show eight years ago, I scheduled interviews with as many of the actors as I could for no other reason than I wanted to breathe their air. Talking to Michael K. Williams about the method of Omar’s “long game” while he aggressively chewed on a sandwich will forever remain a career highlight. In every interview, I would always ask the same question: I wanted the cast to tell me whether working on this program was just another acting gig or if they all knew that they were doing something utterly unique in television history. When I asked this of Seth Gilliam, who played Officer Ellis Carver, he said, “It felt to us more like we were a movement, on a mission, in an army to bring awareness.” What really stoked me back then was the bracingly original political message that ran through The Wire compared to a typical Hollywood production. Most assembly-line entertainment is a variation on the shopworn theme of lone heroes confronting obstacles and then overcoming them. The connective thread of every Wire season, as described by show co-creator David Simon was that when individuals, no matter how heroic, fight to change entrenched power structures and bureaucracies—whether in the form of City Hall politics, police, or organized crime—the individual is going to lose.

That’s why I always shoved it to the back of my mind when my friends in Baltimore—I live about 45 minutes from the city—almost uniformly would tell me they either did not like or would not watch the show. People were hostile toward The Wire for a multiplicity of reasons. Some felt it was like gangster rap for a more sophisticated audience, glorifying black-on-black hyper-masculine street violence while selling itself as somehow more literate and ennobling to consume. My friend Mark once pissed me off fiercely when he told me that my favorite show was “NWA for people who read The New Yorker.”

My Baltimore friends who had seen the show also believed, given the police violence in their town, that The Wire’s view of Baltimore’s finest was almost comically kind. The one policeman who accidentally shoots someone (a fellow officer) not only isn’t prosecuted but gets reintroduced later in the series as a big-hearted public school teacher. And then other people just said to me that living in Baltimore was a struggle and the idea of anyone making commerce out of their pain was simply not their idea of entertainment.

I would casually dismiss these concerns, thinking people were being overly sensitive, overly critical, or just not “seeing” the brilliance in front of them. I also politically defended the show as one of the few spaces on television that, through its brilliant multiracial cast, looked at issues of crime, corruption, and urban blight in a systemic manner. The fact that it actually cared about the hopes, dreams, and lives of street criminals and not just cops felt more than radical. It felt revolutionary.

The events of the last two weeks, however, have changed my view of The Wire in a very fundamental way. I have spent most of my time listening to people in Baltimore speak about how this uprising came to be and why the anger runs so deep. I’ve been primarily speaking to black Baltimoreans in grassroots organizations who have, in a state of MSM invisibility, been building movements for years to fight poverty, end street violence, and challenge police brutality. This is humbling to admit, but this experience has made me reassess my favorite show, as if a very dim light bulb was being switched on above my head. I am now seeing what the The Wire was missing, despite its much lauded, painstaking verisimilitude: the voices of people organizing together for change. Everyone on The Wire seeks individual solutions for social problems: the lone cop, the lone criminal, the lone teacher, the lone newspaper reporter. Yes, it is certainly true that when entrenched bureaucracies battle individuals, individuals lose. But when bureaucracies battle social movements, the results can be quite different.

It is also impossible for me to separate David Simon’s view of people as either passive sheep or lone-wolf heroes from his comments about the events last week in Baltimore. Not his comments to “end the fucking drug war,” which are surely welcome, but his other public perspective.

With the fires in Baltimore just hours old, Simon wrote, “But now—in this moment—the anger and the selfishness and the brutality of those claiming the right to violence in Freddie Gray’s name needs to cease … This, now, in the streets, is an affront to that man’s memory and a dimunition of the absolute moral lesson that underlies his unnecessary death. If you can’t seek redress and demand reform without a brick in your hand, you risk losing this moment for all of us in Baltimore. Turn around. Go home. Please.”

It’s always cringe-worthy when a wealthy middle-aged white guy lectures young black people about who they are and what they should do. In other words, if you had said two weeks ago—in the battle of prominent Baltimore Caucasians—that Orioles Manager Buck Showalter would represent himself better than David Simon, I think many would have been surprised. But his comments also revealed far more than was intended. The idea that David Simon, praised as someone with an ear to these Charm City streets like no one since H.L. Mencken, could look at what was happening in the Baltimore of 2015 and not see the social movements and organization beneath the anger, makes me wonder how much he truly “saw” when producing the show. That David Simon could tell people with bricks in their hand to “go home,” and have no direct words of condemnation for the violence displayed by the police made me remember my friend Dashon—from Baltimore—who told me he would never watch The Wire because he believed it to be “copaganda,” since it was created not only by Simon but by longtime Baltimore police officer Ed Burns.

Now, I cannot help but recall all my favorite Wire moments through a lens that has me wondering if the show was both too soft on the police and incredibly dismissive of people’s ability to organize for real change. In the season that took place in the public schools, where were the student organizers, the urban debaters, and teacher activists I’ve met this past month? In the season about unions, where were the black trade unionists like the UNITE/HERE marchers who were—in utterly unpublicized fashion—at the heart of last Saturday’s march? In the season about the drug war and “Hamsterdam,” where were the people actually fighting for legalization? In the stories about the police, where were the people who died at their hands? It all reveals the audacity—and frankly the luxury—of David Simon’s pessimism. Perhaps this pessimism, alongside the adrenalizing violence, created, as Jamilah Lemieux put it in Ebony, a show steeped in the voyeurism of “Black pain and death” for a liberal white audience that “cried for Stringer Bell and a burned out CVS, but not Freddie Gray.”

I am not saying that art should conform to a utopian political vision of struggle like some dreck from the Stalinist culture mills. But I am asking a question that I wasn’t before: Why were those fighting for a better Baltimore invisible to David Simon? I don’t mean those fighting on behalf of Baltimore—the (often white) teachers, the social workers, and the good-natured cops who are at the heart of The Wire—but those fighting for their own liberation? Why was The Wire big on failed saviors and short on those trying to save themselves? And if these forces were invisible to David Simon, shouldn’t we dial down the praise of the show as this “Great American Novel of television” (Variety!) and instead see it for what it is: just a cop show? There’s no shame in that. I’ll even call it the greatest cop show ever, a cop show with insanely brilliant dialogue, indelible performances, and more three-dimensional roles for black actors than 99 percent of what comes out of Hollywood. But all the same—still just a cop show.

After reading stories like this, I think I’m done with cop shows for now. There’s a line from the Bible that says, “When I was a child, I spoke and thought and reasoned as a child. But when I grew up, I put away childish things.” In the wake of the Baltimore uprising, The Wire’s pessimism seems childish to me, and I’m going to put it away for a while. I could see myself revisiting it in the future, maybe amidst a more dreary political moment. But that moment isn’t now. Baltimore in 2015 shows that we can do more than just chronicle the indignities imposed by entrenched urban power structures—we can challenge them. David Simon should listen to the folks who are engaged in that collective project. As Cutty said, “The game done changed.”