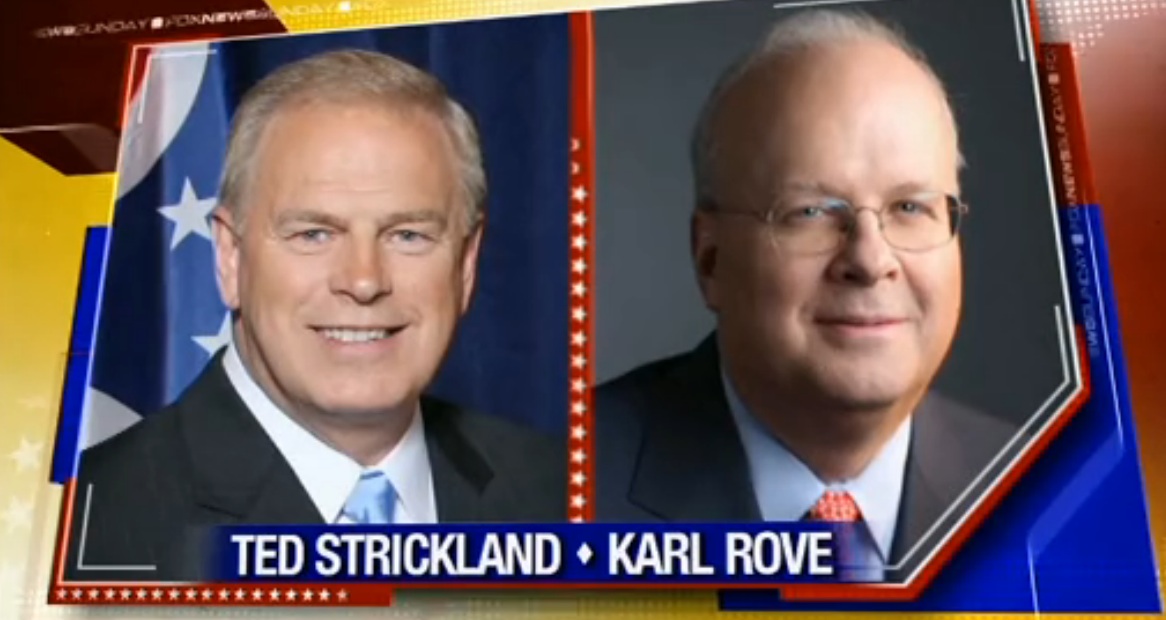 In case you missed Fox News Sunday—and, really, why wouldn’t you have missed it, with the Olympics on at the same time—host Chris Wallace paired Karl Rove and former Ohio Governor Ted Strickland yesterday to discuss the parallel presidential ambitions of Chris Christie and Hillary Clinton. The pairing is one more indication that, despite Christie’s avalanche of troubles in New Jersey, he’s still a front-runner (and we’d argue here, the front-runner) for 2016.

Strickland, an amiable, relatively progressive Democrat, maybe isn’t the most forceful spokesman that the Democrats might have put forward, but in any case he’s the one who was assigned last week to shadow Christie during the New Jersey governor’s fundraising trip to Chicago. Earlier, here at Christie Watch, we’d argued that by paying so much attention to Christie now, the Democrats are essentially admitting that Christie is the one they’re most worried about in a head-to-head match with Clinton two years from now. That’s the question that Wallace tried to get Strickland to answer, though he had to ask it more than once. Eventually, Strickland did respond:

WALLACE: Why are you shadowing Chris Christie two-plus years before he’s even a candidate?

ROVE: Well, first of all, I think Governor Strickland is correct. The reason the Democrats are doing this is because Chris Christie is a strong potential candidate in 2016. They’re going to try to smother every Republican presidential possibility they can because they know that this race in 2016 is going to be difficult for the Democrats, hard to get a third term, particularly after the two terms of Obama.

Rove knows, of course, that demographics and the electoral college are changing the makeup of presidential elections, and that whoever runs against Clinton—assuming she’s the nominee, and it’s looking all-but-inevitable—will find it difficult to win the swing states that Barack Obama carried in 2012. Polls show that Clinton would overwh elm Christie, 58-37 by one count. But it’s early, and Clinton has much higher name recognition than Christie, needless to say, and she has double-digit leads over nearly all of the other potential GOP nominees, too, and an eight-point lead over Paul Ryan.

Yes, it’s way, way too early, though you can already buy lots of Christie 2016 merchandise. Still, a pair of New Jersey former governors, Tom Kean and Brendan Byrne, discussed Christie’s 2016 prospects, according to the Newark Star-Ledger, and they weren’t ruling Christie out. Kean, who’s unhappy with Christie because of a recent disagreement between Christie and Kean’s son, an up-and-coming New Jersey pol, said:

I think he can recover. He has a lot of time left, provided the statements he’s made hold up, and I think they will. We’re already detecting a sense of sympathy for Christie. There’s a feeling that everyone is piling on. He still has a reservoir of support. It will be difficult, but he can come back.

And Byrne, responding, said: “Some people would rather have a damaged Christie than a pure alternative.”